When I first started working, the maximum yearly salary which required a FICA deduction was $4,800. (Yes, I’m old – don’t make fun.) Once you reach the maximum earnings, FICA deductions end for the year, and you get a bump up in your take home pay. (The Consumer Price Index (CPI) today stand more that 7 times as high as in 1966.)

I suspect that most of you are completely unaware that the maximum yearly earnings for FICA works this way, or even that there is such a thing as a yearly cap. That’s because the point where Uncle Sam stops taking out FICA this year is $117,000. That’s well above my pay grade, and above 94.4% of Americans. Only about 1 in 18 Americans earn above $117,000 a year. 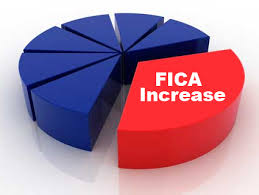 But, back in the day, most Americans hit the cap. When they did, and got a raise in their take home pay, they felt wealthier. Many people would get their raise in October or November each year – a few got it earlier, while few had to wait until sometime in December.

It used to be well known that most of a retail business’s profits came during the Christmas Crush. Everybody was so caught up in the holiday season, buying presents until they were giddy. Analysts used to forecast based on holiday buying being so much higher than during the rest of the year.

Then in 1966, the recently passed Medicare Payroll deductions started, the basic Social Security rate started going up, and they raised the cap for FICA earnings way up to $6,600. All of a sudden, the annual raise (temporary of course) that everyone expected, took a month or more to arrive – many people never passed the FICA cap, so… no raise.

That year, the retail business analysts were dumbfounded. Yes there still was a holiday bump in retail sales, but it was smaller, and it started later in the season. It must have been a one-off event – consumers were just being stingy that year.

But then, as the FICA rates for Social Security and Medicare deductions kept going up, and the maximum earning cut-off level kept being raised, the holiday season buying pattern that had been effect for a generation or more disappeared.

Looking back, it’s easy to see the chilling effect that the higher rates and longer wait for the FICA Withholding Tax to end had on Americans’ ability, and willingness, to spend. But, at the time, precious few of us made the connection.

I have called for Social Security and Medicare to be phased out for those not already retired – a process I would expect to last 40 years or so. Eventually, all Americans would have more money in their pockets after taxes, and a lot of this would translate into a better holiday gift giving season.

A higher tax bite hurts the US Economy – a lower cut going to Uncle Sam helps the US Economy. This is not rocket science, but our leaders’ economists are paid to justify ever bigger government and higher taxes, so don’t hold your breath waiting for less spending and taxation.

Until then, Happy Holidays!