Witnesses observing a crime in progress may tell different stories. Economists looking at the same chart describing the US Economy also may not agree on what’s going on.

A recent article on the American Enterprise Institute (AEI) web site, by James Pethokoukis, The Rise of the Machines vs Workers, in One Chart, showed the following chart: 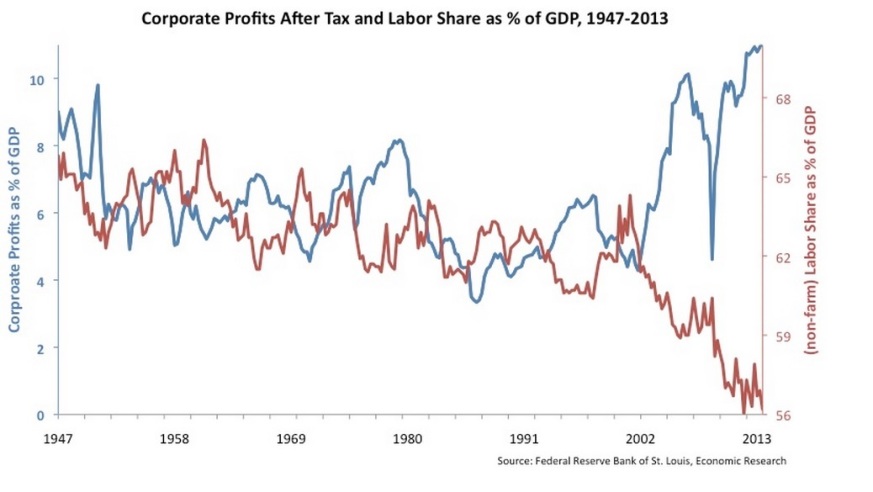 According to the article, University of Chicago economists Loukas Karabarbounis and Brent Neiman say that the relationship between profits and labor’s share of GDP was steady until about 2002, and then the cost of machines dropped, encouraging more capital investment on machines, translating into fewer workers needed.

They say, in effect, that all of a sudden machines became more affordable. They leave the impression that prices dropped suddenly, but I can see a different dynamic in this chart.

I look at the left and middle of the chart and see both profits and the labor share of GDP falling from 1947 through around 1990. During that time, government spending skyrocketed, with Medicare, Medicaid, and other “Entitlements” created and surging. There were many wars – in Korea, Vietnam, and elsewhere – and Pentagon an NASA spending grew faster than GDP. And, government regulation has become more and more oppressive.

As government spending grew, it almost by definition crowded out the private, productive sector – both business profits and labor. There were wiggles up and down between profits and labor, along with the normal business cycle, by the trend clearly was downward.

The advent of the Petro-Dollar meant that although the Dollar was being debased through increasing money printing, the exchange rate was stronger than it would have been, encouraging the great growth of the Trade Deficits. More competition from abroad meant lower business profits and fewer workers needed.

Since then, the US has had a series of expansionary heads at the US FED – Greenspan, Bernanke, and now Yellen. There was the Greenspan “Put” (later called the Bernanke Put), where interest rates were lowered relentlessly and kept low for a generation. The financial industry, especially the big players on Wall Street, benefited tremendously, as industry profits rose to over a thirds of all corporate profits.

Non-financial businesses are faced with an ongoing choice of what to do with earnings:

Buybacks and dividends have gone up marginally, although buybacks were higher temporarily in the mid-2000s.

But, what to do with the lion’s share of business earnings? The ultra low and declining interest rates since the Y2K scare, and continuing up until the present, meant that businesses could finance equipment purchases at very favorable interest rates. So businesses did! And, let us not forget the continuing Bailouts of the big Banks & Wall Street firms.

So, where others see machine prices (as on computers) dropping precipitously as the cause, I see the FED’s Zero Interest Rate Policy (ZIRP) and all the Quantitative Easings (QEs) as the cause. 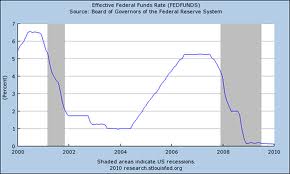 Interestingly, if you compare the top chart with the interest rate chart above, you see that the brief spike in rates lines up with a brief plunge in profits, which is what you would expect.

Over the whole 75+ years, we see that profits are up about 2% of GDP, most of that in the financial sector, while labor has suffered a 10% loss. Labor in the private, productive sector of the Economy has been hurt big time, and this must be remedied. The easiest way is to undo the causes. I’ve given Action Items in numerous previous posts, so I’ll just outline a few of them briefly here.

Action Item: Undo the growth of Government and the FED’s manipulation of Interest Rates

Please read “The Global Decline of the Labor Share.”

One thought on “Government vs Labor and Business”