Can Wind or Solar compete with Natural Gas in being able to supply electricity within the US, when it’s needed, at the lowest cost? A recent analysis shouts a resounding NO!

Many factors need to be taken into account when the cost of production of electricity is considered. 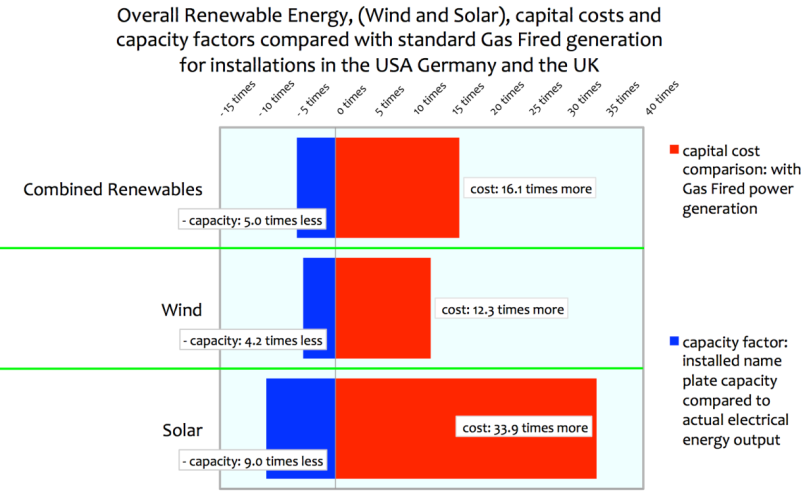 He shows that, on a Megawatt for Megawatt basis, Wind costs over 12 times as much to build as Gas, and that Solar is almost 34 times as expensive! The combined Wind & Solar is in the middle at 16 times.

A large part of the reason that Wind and Solar cost so much more to install is that less electricity is produced than the Nameplate amount. The amount of actual power generated from Wind, compared to the Nameplate capacity, is less than 1/4. For Wind, the actual results are 1/9! (For Natural Gas, you get 100% of the Nameplate Capacity.)

But, neither Wind nor Solar can be ramped up and down as needed. They don’t work when the wind is calm – or too strong – or if the sun isn’t shining. Both Wind and Solar require reliable backup supplies of electricity, and that means having a fossil fuel plant in reserve to cover peak demand above what Wind and Solar can cover, and to provide for total demand when Wind and Solar produce zero power.

Within the US, Solar installations have been limited to rural areas in the southern half of the country. Wind tends also to be away from the users. Hooking these sources to the grid often means that expensive, high tension lines must be installed for many miles to transformer stations. Besides the great expense, it also means that much of the generated power is lost by resistance in the extra transmission line distances needed.

Natural Gas obviously has a unit cost compared to “free” wind and “free” solar. However, when combining the Gas cost with the extra maintenance for Wind and Solar, they tend to cancel out.

So, it appears the NO to competitiveness for Wind and Solar compared to Natural Gas for mass generation of electricity is correct.

What about the environmental effects? The debate on Global Warming is far from over, but the evidence is growing that global temperature increases, while they still were increasing (18+ years ago), are much lower than the Climate Models forecast, and the results have been a great benefit for mankind so far.

And, Wind and Solar also come with environmental downsides, like the hundreds of thousands of bird and bats killed by windmill blades and Solar reflectors.

But, is there nowhere that Wind and Solar can be competitive? Yes, there are specific niches where these make sense.

Knightsbridge is a relief agency which personally delivers solar power units, mainly for water purification, to war-torn and remote areas of the world, such as Darfur. There, it’s Solar or nothing. And Solar Cells are ubiquitous, and economically cheapest, for calculators, highway emergency phones, and many other niche uses.

Similarly, Wind may be more economical where continuous power is not critical, and the nearest plug is far away. For example, Rolling Hills Ranch in northeastern Arizona uses a windmill to power a water well pump for cattle. For them, that’s the best solution.

But, for reliable, affordable generation of electricity for 310,000,000 Americans, fossil fuel, mainly Natural Gas, is the best solution. Don’t let the lunatic fringe, end of the world Greens try to tell you otherwise.