Wait! Let me be more kind. Sometimes, people make choices which don’t work out as well as they had hoped.

You may have a passion for reproductions of historic horse and buggy rigs, and you decide to invest your life savings to open a plant to produce buggy whips. My expectation (I certainly can be mistaken myself) is that your venture won’t meet your profit hopes.

But you plunge ahead, making a truly excellent product. Alas, your venture loses money, and you have to shut your doors.

If this occurrence is widespread, an analyst might say that deflation is occurring. He’d say we were falling into a Deflationary Vortex.

I believe that is an example of not knowing what words mean, which leads to not understanding Economics.

Deflation is not the same as Depression or Recession or Panic in the world of Economics. Deflation is the opposite of Inflation, and neither term means prices – either falling or rising.

While the failing owner may be “depressed” there is no Depression. His loss was the gain of the equipment makers and of the workers who temporarily were employed. The equipment still can be sold off, as can any unsold merchandise, at some low price. The owner, the suppliers, and (former) employees have paid a price for going into a poor choice of a business. In this way, the Free Market takes money away from poor choosers and rewards good choosers.

People don’t always make the best choices. This is just part of the natural business cycle. When a million businesses are growing, and one company fails, the Economy is booming. If a large enough percentage of poor business choices are recognized at the same time, a lot of businesses close.

This causes a lot of employees to be laid off, bills to be unpaid, and equipment & unsold merchandise to be sold at distressed prices, all at the same time. This is the bottom of the business cycle, and is called either a Depression, a Recession, or a Panic.

This is NOT Deflation. Inflation and Deflation are “always and everywhere a monetary phenomenon.” If the money supply is increased, that’s inflation, while a decrease in the money supply is deflation. In recent years, the Keynesian economists have tried to hide the evils of the FED by using inflation as a synonym for a general increase of prices. Unfortunately, they have been successful at redefining the term.

But, whether prices rise or fall still is separate from where we are in the business cycle and also separate from individual industry trends. In the computer industry, prices have fallen continuously for several generations at the same time as the industry and the Economy (mostly) has boomed and contracted. At the same time, medical care has continuously risen in price regardless of the ups and downs of the business cycle.

It’s normal that some businesses grow while others fail. It’s natural for the business cycle to… cycle, just as sometimes it’s sunny, and sometimes it rains – and sometimes there are hurricanes or excellent weather conditions to grow crops.

But, the natural, self-adjusting business cycle can be made worse. Some people make stupid choices. Those who are elected and appointed, and who decide economic policy in Washington, are people. Their stupid decisions may affect millions of people and thousands of businesses with each choice, but the consequences don’t fall on these choosers. The result is that bad business choices are encouraged, and the natural adjustment period, where bad choices are undone, is delayed.

Government actions make the business cycle longer with wilder swings from up to down and back. The people making these bad choices in Washington are not necessarily evil people, but their policies distort the naturally functioning of the private, productive sector of the Economy, and all Americans lose as a result. 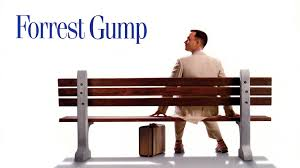 Take for example the higher tax rates which President Obama just called for in his State of the Union address. His call for increased class warfare in the US means that some otherwise good private choices which would create jobs now will become uneconomical. Instead of being invested, that capital will be consumed, and the whole US Economy will suffer.

The call for soaking the rich also will divert attention away from the crazily high government spending and money creation, which are destroying our Economy.

Or take for example the FED’s continuing suppression of interest rates. On the one hand, seniors and others with savings are being cheated out of interest on their money. And, on the other side, borrowers with projects which would not make sense at real world interest rates, are being encouraged to go ahead with poor economic choices by the low rates.

Interest rates cannot be suppressed forever. When rates return to free market levels, those poor choice projects will go through readjustment: a lot of equipment & unsold merchandise will go for firesale prices, a lot of employees will lose their jobs, and a lot of suppliers won’t get paid. The business cycle hasn’t been repealed, it just takes longer and the up and down swings are bigger.

The Free Market using the price mechanism, on average, causes the best choices to be made, allowing for the fastest growth of the general welfare – the fastest growing standard of living.

Government policy which interferes with the Free Market necessarily will cause less economic growth – or continuous economic stagnation as we’ve had in the US for a generation – making Americans poorer than they could have been. A favored few may benefit, but most suffer. 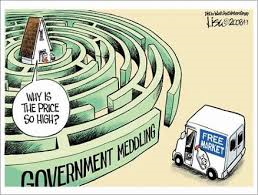 Fewer job opportunities will be created. Fewer advances in business practices and adoption of newer equipment will mean prices will be higher than they would have been. Less R&D will cause less technology to be created.

Free Markets help all Americans – compare a poor American today with royalty 1000 years ago. All but the homeless today have indoor plumbing, refrigeration, cellphones, abundant food, and all the necessities we take for granted. William the Conqueror may have been rich compared to his subjects, but he didn’t have much of what the poor in America have today.

It’s been Free Markets, producing new and improved products for lower and lower prices, which have worked this miracle. We need to move back in that direction.

It’s not that all these things our leaders have put in place throughout the last 100 or so years were enacted for evil intent. But, in practice, all Americans are poorer because of these stupid government choices.

7 thoughts on “The Business Cycle & Government”