I generally am NOT a fan of business regulation. I believe that simple enforcement of laws against fraud and other crimes should be sufficient to keep businesses on the straight and narrow.

Diligent enforcement of the law, together with every business’ best interest – serve customers, employees, and owners faithfully, or go out of business – should be all that is needed.

However, in many industries, large businesses have captured the regulators and have made a mockery of diligent law enforcement.

With that in mind, and mindful of the daily increase in the risk of a financial meltdown in the US, which would steal the savings of most Americans, I would like to propose a new regulation. (I apologize in advance for breaking one of my own cardinal rules.) But first, a little background.

Several commentators have noted the tidal wave of derivatives which has been created since the late 90s. The “notional value” of these derivatives have come to dwarf the entire world Economy many times over, to say nothing of the relatively meager capital which the issuing financial institutions have available to pay off, if the bets go the wrong way. 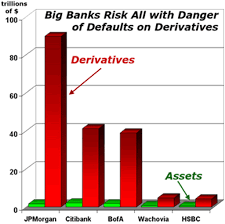 Dodd-Frank, and other laws have changed the rules from government (taxpayer) bailouts (not a good idea) to depositor bail-ins (another lousy idea). A bail-in, for those of you unfamiliar with the term, means that if a bank gets into trouble, the FDIC may force the bank to steal depositors’ money to recapitalize the bank. (I thought that the supreme job of the FDIC was to protect depositors!) The War on Cash is in anticipation of the coming bail-ins.

Now, some use of derivatives can be beneficial to the banks’ business. But, over-use can endanger every penny of the banks’ capital plus all the deposits and other assets of the banks. This is the situation existing at many banks, especially the half-dozen “too-big-to-fail” institutions.

The problem for depositors is that they have no way of knowing how much risk the bank management has subjected their savings to.

And, that risk is not just the derivatives. Banks tend to have a mountain of invisible linkages to other institutions, such as ultra short term money market loans and repos. If the bank on the other end of your repo goes bust, your bank loses.

The big problem that I’d like to address, is that depositors currently have no way of knowing any of these risk factors.

Action Item: I propose a law which would require a simple statement of:

If a depositor is OK with the level of risk involved with depositing money in a bank with a 1000% derivative percent of capital, then I’m OK with it too. Just don’t expect for me, and for other taxpayers, to give a $%#& if you lose your money.

I would expect that most of us would look at those numbers and would bank with those institutions which are playing it safe, especially when the reward (interest paid) is so pitifully low.

The banks – even the big banks – would have to reduce their risky “investments” in derivatives or face bank runs.

This one simple – one page – regulation would do more to prevent bank bankruptcies than most of the laws already on the books. Dodd-Frank would become unnecessary very quickly.

We don’t need any stinkin’ captured regulators. We need some basic information so that the Free Market can protect bank consumers.