For this post I’ve taken as my departure point a couple of very interesting graphs from over at Not A Lot Of People Know That. I’ll repeat them here:

Interesting, no? But I’m a numbers guy, I wanted to actually analyze the results. Using the data from those posts and adding the US information, I graphed the relationship … Figure 1 shows the result: 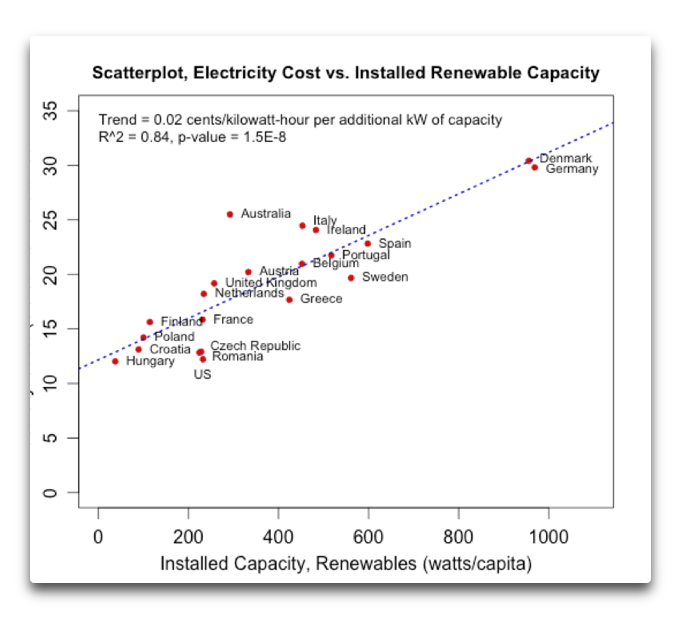 Figure 1. Electricity costs as a function of per capita installed renewable capacity. Wind and solar only, excludes hydropower. [Updated to add Australia and correct the units]

That is a most interesting result. Per capita installed renewable capacity by itself explains 84% of the variation in electricity costs. Not a big surprise given the crazy-high costs of renewables, but it is very useful for another calculation.

Today, President Obama said that he wanted 28% of America’s electricity to come from renewable energy by 2030. He has not detailed his plan, so I will assume that like California and other states with renewable targets, and like the EU graph above, hydropower is not included in counting the renewables, and thus the energy will have to come from wind and solar. (Why? In California, they admitted that hydropower was excluded because it would make it too easy to meet the renewable goals … seriously, that was their explanation.)

Currently, we get about 4% of our electricity from wind and solar. He wants to jack it to 28%, meaning we need seven times the installed capacity. Currently we have about 231 kW/capita of installed wind and solar (see Figure 1). So Obama’s plan will require that we have a little less than seven times that, 1537 kW/capita. And assuming that we can extend the relationship we see in Figure 1, this means that the average price of electricity in the US will perforce go up to no less than 43 cents per kilowatt-hour. (This includes the hidden 1.4 cents/kW cost due to the five cents per kilowatt-hour subsidy paid to the solar/wind producers).

And given that President Obama famously predicted that under his energy plan electricity prices would necessarily “skyrocket” … it looks like he finally might actually succeed at something.

Since this is being done illegally or at least highly improperly by means of Obama’s Imperial Presidential Fiat, there seems to be little we can do about it except to let your friends and neighbors know that thanks to Obama and the Democratic Party, their electric bill is indeed about to skyrocket … otherwise, Obama is likely to blame it all on President Bush.

My Usual Plea: If you disagree with someone, please quote the exact words that you object to. That way we can all understand exactly who and what you are objecting to.

Prediction Notes: It is always dangerous to try to predict the future. In this case, we have a couple of issues. First, we don’t know if this relationship will continue to work in the future. And we don’t know if America’s path will be like that of the other countries. The good news is, the fact that there are 19 countries which differ greatly in both installed capacity and level of economic development gives some comfort.

Next, outliers. I tested to see whether it would change the trend if I removed Denmark and Germany … it barely changed. That was very encouraging, because it means that the same relationship held when we extended the data from 600 kW/capita (Spain etc.) out to about 1000 kW/capita, a projection of about 60%. Since the extension to the projected US installed capacity/capita (1000 out to 1500 kW/capita) is of about the same size, this increases confidence in the estimate.

Finally, we have to make some assumptions about US electricity use in 2030. It will increase … but by how much? Fortunately, the independent variable is installed renewable capacity per capita. This means that extending the line contains a tacit assumption that the electricity consumption will increase at about the same rate as the population. While we have no way to know if this is true, US per capita electricity consumption has been about flat for the last two decades, so it is the most reasonable assumption.