Consider two families. Both have a weekly income of $1000, and both spend it all.

Question: Are both families doing just as well, or is one doing better than the other?

My guess is that you can see that it is earnings which are important, rather than spending. I expect that you will agree that family one is 3% better off than family two, which borrowed 3% to match the spending of family one.

On a national scale, GDP tries to describe how well the US Economy is doing. It is flawed mightily in several respects, not the least of which is the phony adjustment for inflation. But, putting the other flaws aside, let’s look just at how the GDP numbers relate to our two families above.

If you were looking closely, you’d have noticed that GDP measures only the spending side of the ledger – just like our family two above. It ignores the government borrowing (Budget Deficits). But, just as family two was no better off because of its borrowing (which had to be paid back), the true measure of GDP should include the Deficit.

The 2015 Budget Deficit, based on the 9 months through June ’15, is running at a (reduced) annual rate of $430 Billion. Compared to GDP, that’s government borrowing of almost 2.4% of GDP. If we reduce the GDP growth by the 2.4% borrowing – to match our family one way of accounting, we find that the US Economy, after adjusting for federal borrowing, is SHRINKING by 0.5%! 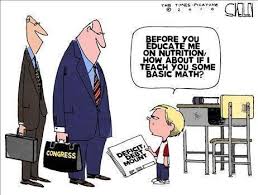 My conclusion is that, to really improve the economic welfare of all Americans, we need to cut back government spending drastically. We need to eliminate the Budget Deficits (or even run Surpluses!), since these deficits screw with our perceptions of Economic Growth. We need to get rid of as much government spending as possible, since this less than $1 for $1 value takes away from the potential of the private productive sector.

Congress and the President have a built in bias toward expanding their domains – frequently referred to as Empire Building. We must force them to shrink government so that all Americans can be more well off.