Skip to content
HomeWe Have Bigger Problems Than Climate Change

It is remarkable what gems of wisdom one can find simply by sitting down and reading the IPCC AR reports and seeing what they actually say. Having spent more time than I would like to admit on WGI (the science) over the years, I decided to spend some time on WGII (the impacts). How bad is it going to be according to the collective wisdom of 97% of the world’s climate science brain trust?

Now it is a long report, it would take weeks to work through all the chapters, the tortured language, and dig into the references, many of which would be pay walled. So I went straight for sections on the economy. Now I’m not an economist, but it doesn’t take a genius to figure out that anything bad that happens on a global basis will have a negative impact on our global economy. I wanted to know, if the 97% of scientists are right, how bad is it going to be? The answer blew me away. I won’t keep you in suspense, I’ll go straight to the money quote (bold theirs):

For most economic sectors, the impact of climate change will be small relative to the impacts of other drivers (medium evidence, high agreement). Changes in population, age, income, technology, relative prices, lifestyle, regulation, governance, and many other aspects of socioeconomic development will have an impact on the supply and demand of economic goods and services that is large relative to the impact of climate change. {10.10}

As [poll after poll] shows, the public rates climate change at the very bottom of their list of concerns. The United Nations IPCC AR5 brain trust is stating, point blank, that not only will changes in population, age, income, technology, lifestyle, regulation, governance, and many other things have a bigger impact on our socioeconomic wellbeing, they will be much bigger. Read it for yourself here:

In fact, Chapter 10 goes into considerable detail showing us how little climate change is going to affect us. Based on a two degree rise in temperature over the next 50 to 100 years, they break it down sector by sector:

The tourism industry (both winter and summer) will be much less affected by climate change than by population, lifestyle, income and aging. You’d think cooling and heating demand would change dramatically with climate change, but no, climate change gets trumped by population, income, energy prices and technology. Health services? With all the disasters to befall us, you’d think there would be major stress on our healthcare services. Turns out that even diet trumps climate change as a driver of impacts to our wellbeing (Curiously, technology did not make the list of drivers for health services!) . For transportation climate change gets trumped by no less than a list that includes population, income, urbanization, regulation, mode shifting (if someone knows what mode shifting is, by all means post in comments) consumer and commuter behaviour. The insurance industry is apparently the only sector where climate change rivals other drivers, and then only in developed countries.

So where’s the alarm? The message to governments is pretty clear. On a global basis, there is a lot more to worry about while planning your country’s economy than climate change. Chapter 10 makes a valiant attempt to keep on message:

Losses accelerate with greater warming (limited evidence, high agreement), but few quantitative estimates have been completed for additional warming around 3°C or above.

So…. In trying to keep the fear and uncertainty at a fever pitch (losses accelerate with warming), the IPCC tacitly admits that they don’t actually know. They have, in their own words, limited evidence to draw this conclusion. Nonetheless, they forge on, insisting that they have high agreement (in the absence of evidence they nonetheless appear to have faith!). What evidence do they have? Here is the money chart from the same Chapter 10: 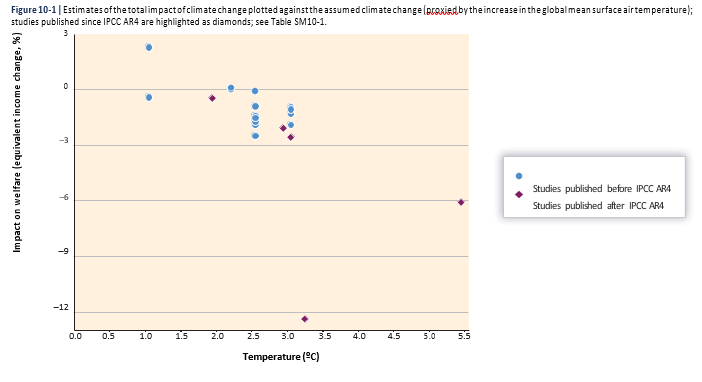 As can be seen from this chart, almost as many studies have been done at 3 degrees as have been done at 2.5 degrees, and they come up with almost the same result. In fact, their claim of a “few” studies at greater than 3 degrees is only two studies. One is a study done a 5.5 degrees. Given the constraints on sensitivity in the current literature, that large a temperature change could only be driven by natural variability. A single study done at 3.25 degrees which projects a negative impact of more than 12% appears to be the straw the IPCC is grasping at to keep the potential for the disaster meme alive. It is an obvious outlier from the rest of the literature, which the report tries to gloss over.

Now let’s ponder for a moment just how small these negative impacts actually are. The IPCC charts rating changes compared to other economic drivers as “less” or “much less” don’t paint the picture very well. Keeping in mind that 2% at two degrees (and that is the upper range in the estimate) is spread over the timeframe that it takes to reach that temperature. Since the target date in the Paris fear festival was 2100, let’s round it off to 100 years for easy figuring.

That’s 0.02% per year. Forecasted economic growth for most countries in the world ranges from -5% to +5% per year. In other words, the IPCC is telling us that the socioeconomic impacts of climate change are less than a rounding error. I’ll end this article by quoting the initial statement from the IPCC again. The public and government alike have a lot more to worry about than climate change:

For most economic sectors, the impact of climate change will be small relative to the impacts of other drivers

So sayeth the United Nations

I accept them at their word.