By Sheldon Walker – Re-Blogged From http://www.WattsUpWithThat.com

The aim of this article is to split the temperature increase that occurred between the end of 2014, and the end of 2015, into 2 components. An El Nino component, and a Global Warming component. This will allow the size of the 2 components to be compared.

In order to do this we need to choose a temperature series. HADCRUT4 monthly temperature data will be used for the initial analysis, but the results for GISTEMP, NOAA, and Berkeley will be included for comparison with the HADCRUT4 results.

Graph 1 shows the HADCRUT4 monthly temperature anomaly plotted for the years 1880 to 2015. Also plotted is a LOESS curve for the HADCRUT4 data. The LOESS curve was generated using multiple local regressions, each regression using 20 years of data. 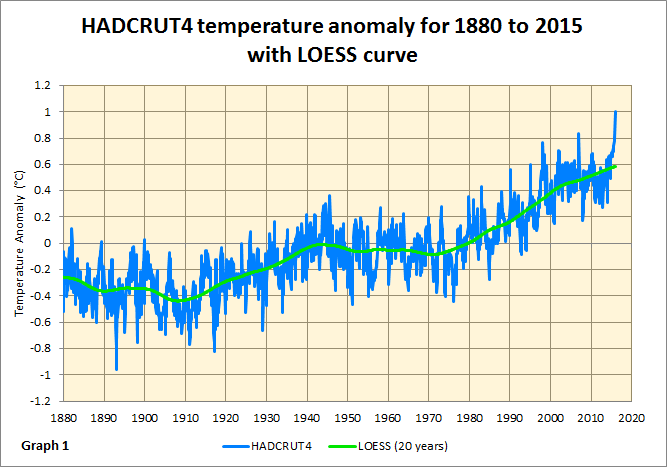 It can be seen from graph 1 that the most recent period of consistent warming started around 1975, and continued to the end of the data (December 2015). The LOESS curve shows that the warming trend is reasonably linear over the years 1975 to 2015. A linear regression will be done over this period.

We know from the linear regression that the temperature change due to Global Warming for 1 year is 0.0175 °C.

The results for the different temperature series are shown in the following table.

These calculations are uncomplicated, and easy to do. The results are unambiguous. The results of these calculations should not be a surprise to anybody who is familiar with the climate. Think about what happened with the 1998 El Nino. The temperature zoomed up, and later zoomed down again. That temperature increase wasn’t due to Global Warming, it was due to El Nino. Do the climate scientists expect this El Nino to be different?

So it is surprising to see that a number of climate scientists have made statements about 2015 which minimise the effect of El Nino, and exaggerate the effect of Global Warming.

As you read the following quotes, remember that this analysis showed that El Nino was responsible for around 95% of the temperature change between the end of 2014, and the end of 2015. El Nino caused an increase in temperature of about 0.32 °C, but the climate scientists claim that it was only a few hundredths of a degree.

1) Quotes from an article called “Analysis: How 2015 became the hottest year on record” from CarbonBrief.org

Rising greenhouse gases and a “small contribution” from the El Niño in the Pacific combined to cause the record temperatures in 2015, the Met Office’s Prof Adam Scaife tells Carbon Brief.

How much of the record temperature in 2015 was down to El Niño?

El Niño was growing in 2015 and only reached its peak this winter. So, we think El Niño made only a small contribution (a few hundredths of a degree) to the record global temperatures in 2015. – (Prof Adam Scaife)

Does that mean human activity was the biggest driver of 2015’s record temperature?

Yes. The nominal record global average temperature of 2015 was well predicted in advance and well explained as being primarily due to global warming, itself mainly due to greenhouse gas emissions of human origin. El Niño made only a small contribution.” – (Prof Adam Scaife)

2) Quotes from an article called “Analysis: How much did El Niño boost global temperature in 2015?” from CarbonBrief.org

Carbon Brief has spoken to climate scientists working on this question, who all seem to agree El Niño was responsible for somewhere in the region of 10% of the record warmth in 2015.

Dr Gavin Schmidt, director of NASA’s Goddard Institute for Space Studies, described the ongoing rise in global temperatures as having had “an assist” from El Niño.

We think El Niño made only a small contribution (a few hundredths of a degree) to the record global temperatures in 2015.

Schmidt estimated El Niño was responsible for 0.07C of the above-average warming we saw in 2015.

A quick comparison of either Schmidt or Cropper’s numbers with NASA’s temperature anomaly for 2015 of 0.87C above the 1951-1980 average suggests El Niño contributed about 8-10%.

Stott tells Carbon Brief: An estimate of less than 0.1C due to El Niño on 2015 global mean annual mean temperatures is less than 10% of the approximately 1C warming of 2015 relative to pre-industrial levels.

In other words, El Niño contributed “a small amount on top” of the warming greenhouse gases are already causing, says Stott.

There’s no doubt the El Niño that developed in 2015, which is still underway, has been abnormally strong, exceptional even. But with a contribution somewhere around the 10% mark, it seems clear from scientists that El Niño can’t be blamed for 2015’s record warmth. In fact, its contribution was strikingly small.

All of those scientists certainly seem to be singing from the same songbook!

I would like to see these scientists justify their comments, using numerical calculations to show where they got their figures from. I have fully documented my method here. If anybody can point out an error in my results, then please let me know.