Skip to content
HomeLong -Term Climate Change: What Is A Reasonable Sample Size?

Recent discussion about record weather events, such as the warmest year on record, is a totally misleading and scientifically useless exercise. This is especially true when restricted to the instrumental record that covers about 25% of the globe for at most 120 years. The age of the Earth is approximately 4.54 billion years, so the sample size is 0.000002643172%. Discussing the significance of anything in a 120-year record plays directly into the hands of those trying to say that the last 120-years climate is abnormal and all due to human activity. It is done purely for political propaganda, to narrow people’s attention and to generate fear.

The misdirection is based on the false assumption that only a few variables and mechanisms are important in climate change, and they remain constant over the 4.54 billion years. It began with the assumption of the solar constant from the Sun that astronomers define as a medium-sized variable star. The AGW proponents successfully got the world focused on CO2, which is just 0.04% of the total atmospheric gases and varies considerably spatially and temporally. I used to argue that it is like determining the character, structure, and behavior of a human by measuring one wart on the left arm. In fact, they are only looking at one cell of that wart for their determination.

The degree that promoters of the Intergovernmental Panel on Climate Change (IPCC) anthropogenic global warming (AGW) hypothesis will go to distract and deceive was emphasized again in the article by Quang M. Nguyen. Almost the entire activities of the promoters involve proving that everything in the period of instrumental record is record breaking. This includes changing the paleo record, as they did with the ‘hockey stick’ and adjusting the slope of the gradient in the instrumental record. Considering the 120-year period of instrumental record as representative of anything is ludicrous. In the infamous 2001 IPCC Report, we learned from Phil Jones that the temperature increase for the instrumental record, that became the blade of the ‘hockey stick’ was 0.6°C with an error factor of ±0.2°C or ±33%. But that is just the tip of the iceberg.

Two major themes of the AGW claims are that temperature change is greater and more rapid than at any time in the past. This is false, as a cursory look at any longer record demonstrates. If it wasn’t, the actions taken to change the record are unnecessary. The Antarctic and Greenland ice core records both illustrate the extent of temperature change in short time periods. Figure 1 shows a modified Antarctic ice core record.

The total temperature range is approximately 12°C (-9°C to +3°C). The variability is dramatic even though a 70–year smoothing average was applied. The diagram compares the peak temperatures in the current interglacial with those of the four previous interglacials. The horizontal scale on the x-axis is too small to identify even the length of the instrumental record.

Steve Goreham shows how small a portion it is in this diagram of the last 10,000 years (Figure 2).

Another graph shows the same period, the Holocene Optimum, in a different form (Figure 3).

The temperature range in this period is approximately 3.75°C (28.75 to 32.5°C) but is above the current annual average global temperature for most of the 10,000 years. Just put the approximately 120-years of instrumental record in any segment of the graph and you see how it is cooler than most of the period and well within natural variability.

The IPCC claim Radiative Forcing (RF) remained relatively stable before 1750. Since then they claim a steady rise due to primarily to the human addition of CO2 (Figure 4). As NOAA explains

So the claim is that a 2.29 W m-2 increase in RF explains almost all temperature change since 1750. Compare this increase with the variation in RF from a few natural climate drivers not included in the IPCC models. How reliable is this data? What are the error ranges? We know that climate sensitivity, that is the RF impact on temperature has decreased significantly (Figure 5). Notice that the IPCC is an outlier in this range of climate sensitivity estimates. These estimates are within or very close to the error of the estimate. One definition of RF says,

Radiative forcing by a climate variable is a change in Earth’s energy balance between incoming solar radiation energy and outgoing thermal IR emission energy when the variable is changed while all other factors are held constant.

The phrase “all other factors are held constant” is traditionally covered by the Latin term ceteris paribus. Unfortunately, that is never the case in reality and to apply it in the dynamic system that is climate change renders meaningless results. It is like the phrase that something is ‘purely academic,’ which means it has no relevance to the real world. The slope in Figure 5 shows a trend that supports those who argue that CO2 has no climate sensitivity. Regardless, the amount of sensitivity is too small to be significant.

The trouble is the estimates of just one side of that balance, the “incoming solar radiation” (insolation) varies considerably. Figure 6 shows the variation in values of insolation estimates from several computer models. In a 2005 paper titled How well do we compute the insolation at TOA in radiation climatologies and in GCMs?

“The solar forcing used in 20 models participating in the Atmospheric Model Intercomparison Project (AMIP-2) was compared with the same quantity computed for ISCCP. Models and climatology should agree at least in this quantity, however, the figure at the bottom of page 1 (Figure 6 in this article) shows a large disagreement.

It can be speculated that such different meridional profiles of the solar radiative forcing at TOA should also have impact on the computed atmospheric circulation pattern, in particular when simulations over periods of several decades to several centuries are performed. Therefore, related projects within the World Climate Research Program should take appropriate steps to avoid systematic discrepancies as shown above and to estimate their possible impact on the resulting climate and circulation changes.”

The average variation is low near the equator but considerable in higher latitudes. It is reasonable to assume an error overall of at least 5 Wm-2 which more than covers the IPCC claimed CO2 sensitivity.

A larger question is what climate forcing variables are ignored, especially in the IPCC models. The answer is a great many. With most the variability and the error of the estimates totally swamp the claimed human RF.

The Milankovitch Effect is not included in the IPCC computer models because it is argued the changes are too slow and too small for the 120-year instrumental record.

Figure 7 shows the variation in RF at 40°N over a one-million-year period. 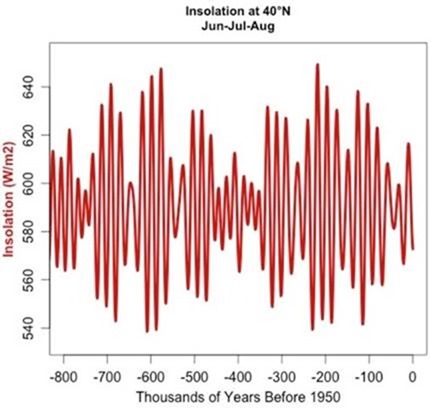 Willis Eschenbach examined the relationship between the insolation curve and the 100,000-year Milankovitch cycle and found no connection with the EPICA Antarctic ice core temperature anomaly. That is not my concern here, rather it is the swing of insolation of 100 W m-2 compared to the IPCC claim of 2.29 W m-2.

Eschenbach compared Milankovitch against glacial/interglacial swings during the Pleistocene. Many people don’t know that there are at least four glaciations before the Pleistocene with speculations about the cause but with no agreement. The most common speculation involves orbit of the Sun around the Milky Way and interactions with galactic dust in that voyage. How does that affect RF?

The list of variables and mechanisms that cause variation in the RF over short and long periods well beyond the 2.29 W m-2 claimed for human produced CO2 is extensive. Lamb included a diagram in Volume 2 of Climate Present, Past and Future (Figure 8). 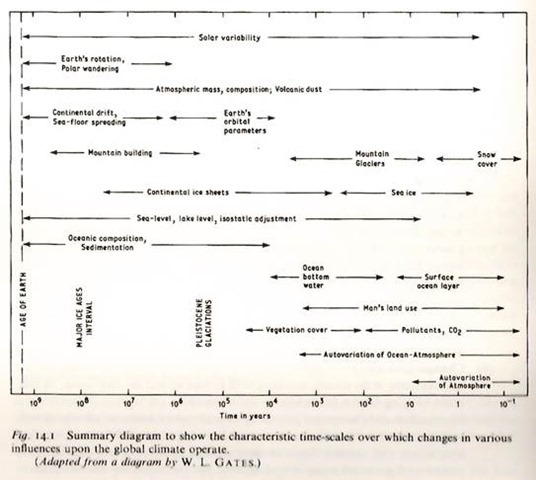 Then there is the question of water vapor. Everyone agrees it is the most important greenhouse gas by far, they just don’t agree on how much. Water vapor is 95% and CO2 4% by volume, so AGW proponents claimed CO2 was “more effective” in its ability to block outgoing thermal radiation. The wide range of estimates of the effect is proof that nobody knows. Worse, there is a contradiction between NASA’s claim in a study trying to prove the positive feedback of water vapor is real and consequential, and the IPCC.

“This study confirms that what was predicted by the models is really happening in the atmosphere,” said Eric Fetzer, an atmospheric scientist who works with AIRS data at NASA’s Jet Propulsion Laboratory in Pasadena, Calif. “Water vapor is the big player in the atmosphere as far as climate is concerned.”

So, the increase in atmospheric CO2 from humans determines the amount of atmospheric water vapor. In the 2007 IPCC Report, we learned,

“Water vapour is the most abundant and important greenhouse gas in the atmosphere. However, human activities have only a small direct influence on the amount of atmospheric water vapour.”

There is little doubt that the variation in atmospheric water vapor and the error in the estimates alone exceeds the 2.29 W m-2 attributed to human CO2. It is also true for most variables, especially those omitted by the IPCC.

It is the misuse of science to create the deception that is the AGW claim that makes distraction, exaggeration and selective truths necessary. However, as Aldous Huxley said, “Facts do not cease to exist because they are ignored.”