By Bob Tisdale – Re-Blogged From http://www.WattsUpWithThat.com

This post will serve as part 2 of the 2015 update of the model-data comparisons of satellite-era sea surface temperatures. The 2014 update is here. This, the second part, contains time-series graphs.  But the data and model outputs are being presented in absolute, not anomaly, form.

The climate models used by the Intergovernmental Panel on Climate Change (IPCC) are not simulating climate as it exists on Earth.  That reality of climate models will likely come as a surprise to many climate laypersons.

We presented in part 1 of this series how the spatial patterns of the modeled warming rates for the surfaces of the global oceans from 1982 to 2015 (the era of satellite-enhanced sea surface temperature observations) show no similarities to the spatial patterns of the observed (data-founded) warming and cooling.  And we discussed why it’s important that the models used by the IPCC are capable of simulating where and when and why the temperatures of the ocean surfaces vary.  It’s relatively easy to understand. Where and when the surfaces of the oceans warm, don’t warm, or even cool naturally and by how much—along with other naturally occurring factors—dictate where and when land surface air temperatures rise and fall and where precipitation increases or decreases…on annual, decadal and multidecadal bases.

In part 2, we’re presenting the model-data comparisons in time-series graphs globally and for a number of subsets. And as noted earlier, the data and models are being presented in absolute form.  The use of sea surface temperatures instead of anomalies helps to illustrate addition problems with the models.

The actual ocean surface temperatures, along with numerous other factors, dictate how much moisture is evaporated from the ocean surfaces, and, in turn, how much moisture there is in the atmosphere…which impacts the moisture available (1) for precipitation, (2) for water vapor-related greenhouse effect, and (3) for the negative feedbacks from cloud cover.  In other words, failing to simulate sea surface temperatures properly means the atmospheric components of coupled ocean-atmosphere models are also flawed.

The sea surface temperature dataset being used in this post is the weekly and monthly version of NOAA’s Optimum Interpolation (OI) Sea Surface Temperature (SST) v2 (a.k.a. Reynolds OI.v2).  We’re using it because (1) it is the longest running satellite-enhanced sea surface temperature dataset available, (2) its satellite data are bias adjusted based on temperature measurements from ship inlets and from buoys (both moored and drifting), and (3), most importantly, NOAA’s Reynolds OI.v2 data have been called “a good estimate of the truth”.  See Smith and Reynolds (2004) Improved Extended Reconstruction of SST (1854-1997).  The authors stated about the Reynolds OI.v2 data (my boldface):

Although the NOAA OI analysis contains some noise due to its use of different data types and bias corrections for satellite data, it is dominated by satellite data and gives a good estimate of the truth.

This is not the (over-inflated, out-of-the-ballpark, extremely high warming rate) high-resolution, daily version of NOAA’s Reynolds OI.v2 data, which we illustrated and discussed in the recent post On the Monumental Differences in Warming Rates between Global Sea Surface Temperature Datasets during the NOAA-Picked Global-Warming Hiatus Period of 2000 to 2014.  Based on that post, we also are not using the NOAA ERSST.v4 “pause buster” data, which makes up the ocean portion of the NOAA and GISS combined land+ocean surface temperature products. NOAA has adjusted the numerous parameters in their ERSST.v4 model so that the warming rates for the NOAA-selected periods of 1951-2012 and 2000-2014 are at the extreme high ends of the trend uncertainty ranges for those periods. And as we illustrated and discussed in that post, the original (weekly/monthly, 1-deg resolution) version of the Reynolds OI.v2 data we’re presenting herein has, basically, the same warming rate as the UKMO HADSST3 data for the NOAA-selected hiatus period of 2000-2014.

The climate models presented in this post are those stored in the CMIP5 archive, which was used by the IPCC for their 5th Assessment Report (AR5). The CMIP5 climate model outputs of sea surface temperature are available through the KNMI Climate Explorer, specifically through their Monthly CMIP5 scenario runs webpage, under the heading of Ocean, ice and upper air variables.  Sea surface temperature is identified as “TOS” (temperature ocean surface). For consistency with past posts, the “CMIP5 mean” and the Historic/RCP6.0 scenario are being used.  The RCP6.0 scenario is the closest to scenario A1B used for the CMIP3 models (used by the IPCC for the 4th Assessment Report).  And once again we’re using the model mean because it represents the forced component of the climate models. Basically, the model mean represents the consensus of the climate modeling groups for how the surfaces of the oceans should warm if they were warmed by manmade greenhouse gases and the other factors used to drive the models. For a further discussion, see the post On the Use of the Multi-Model Mean.

Because the model-data comparisons are in absolute terms, annual data are being presented.  The Reynolds OI.v2 data start in November 1981 so the comparisons run from 1982 to 2015…34 years.

The linear trends in the graphs are as calculated by EXCEL. 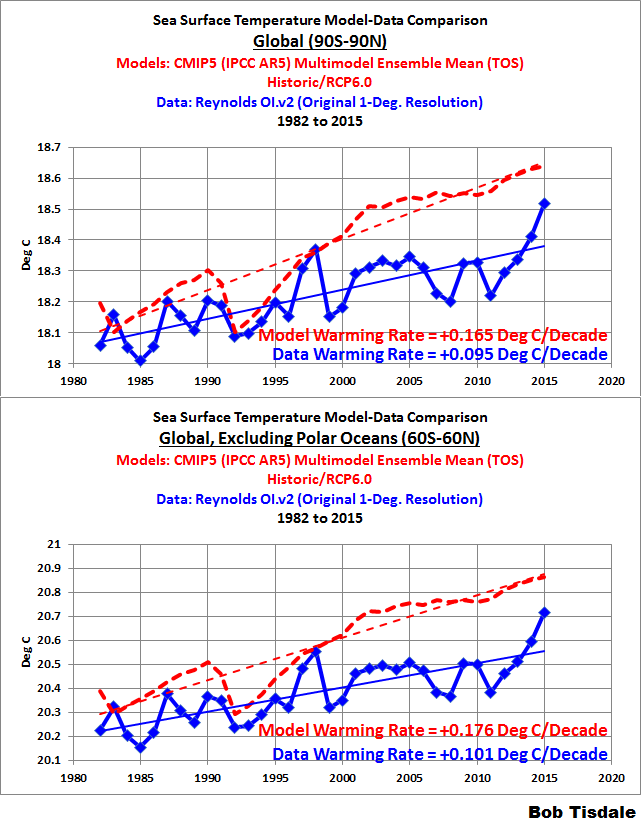 The differences between models and data on a global basis highlight a very basic problem with the models.  The modelers have to rely solely on manmade greenhouse gases and other anthropogenic factors to drive the climate models, because climate models do not properly simulate the timing, magnitude and duration of naturally occurring processes that can cause ocean surfaces to warm.  Based on those models (that bear no similarity to the real world), the surfaces of the global oceans were expected to warm at a rate of roughly 0.17 deg C/decade for the past 34 years, but in the real world, the observed global warming rates due to the combination of natural variability and greenhouse gases was only about 0.10 deg C/decade. That’s a monumental difference between hypothesis and reality.

Another fact to consider:  the data existed while the modelers were preparing their climate models for the CMIP5 archive.  In other words, the modelers knew their goals.  And the best the modelers could do was almost double the warming rate of the surface of the global oceans.  That’s an atrocious modeling effort…even with the recent upticks in global sea surface temperatures attributable primarily to The Blob in 2014 and to the 2015/16 El Niño in 2015.

Also note that the climate model-simulated ocean surfaces are slightly warmer than observed. For the latitudes of 60S-60N, the average model-simulated ocean surface temperatures for the period of 1982 to 2015 are about 0.2 deg C higher than observed.  Maybe that’s why climate models simulate too much precipitation globally. See Figure 2, which is Figure Intro-10 from my ebook On Global Warming and the Illusion of Control.

That disparity between models and data supports the June 2013 model-data comparisons of the warming of the tropical mid-troposphere prepared by John Christy.  See Roy Spencer’s posts EPIC FAIL: 73 Climate Models vs. Observations for Tropical Tropospheric Temperature and STILL Epic Fail: 73 Climate Models vs. Measurements, Running 5-Year Means.  The models grossly overestimated the warming rates of the mid-troposphere in the tropics.

Let’s break down the tropical oceans.  As shown in Figure 4, the difference between the simulated and observed warming rates for the tropical Atlantic and Indian Oceans