I covered a similar study back in 2008 which you can read about here. This study takes it to a national level, suggesting once again that surface temperature records are not really measuring a “climate change” signal in entirety. The author of the study says that “correlation of temperature above background levels and national energy consumption is very high”. Seems like a no-brainer to me. This has far reaching consequences for the validity of the surface temperature record and its ability to discern a real CO2 induced climatic signal. – Anthony

The greenhouse effect isn’t the only thing warming things up. There is also the waste heat released when we generate and use energy – even clean energy. Yet the regional impact of that heat – which moves from warm buildings, engines and power plants into the world around us – has not been well accounted for. A new study now shows waste heat may explain some temperature variations at a national scale better than do global climate change models.

“This is a major source of climate change that has not been looked at,” said John Murray of The Open University in Milton Keynes, England and lead author of the new study accepted for publication in Earth’s Future, a journal of the American Geophysical Union. “Any kind of energy consumption generates heat” Murray said.

This picture, taken with a thermal imaging camera, reveals how much heat is being emitted by City Hall in London (Image: National Pictures)

To tease apart the waste heat signal, Murray and co-author Douglas Heggie of the University of Edinburgh compared national temperatures in Japan and the United Kingdom with global temperature trends and with energy consumption from 1965 to 2013. They focused on Japan and the U.K. because as island nations, they are more isolated than mainland countries and more likely to stew in their own waste heat.

The researchers found that for both countries, waste heat explains national climate variations: national temperatures track better with energy use than with global temperature trends. The data showed a correlation between a temperature drop in the U.K. and the current economic recession, which has caused a reduction in energy use there, Murray said. The study also found Japan’s steadily growing energy consumption parallels the worldwide increase in carbon dioxide levels.

The scientists caution that both countries are rather extreme cases: Japan has the 8th highest mean energy consumption in the world and the U.K. has the 13th. Of the two nations, Japan has a warmer climate and therefore less need to heat buildings.

Britain, on the other hand, shows a more pronounced local temperature variation, being a cold enough place to require indoor heating for about six months each year. There is also more cloud cover in the U.K. than in Japan, and those clouds hold waste heat closer to the ground, where it can raise the temperature.

“The correlation of temperature above background levels and national energy consumption is very high,” concluded Murray. This suggests that energy consumption should be factored into the national climate change projections of any densely populated country, he said.

From Urban to National Heat Island: the effect of anthropogenic heat output on climate change in high population industrial countries

• Annual heat output for the U.K. and Japan is determined from national energy consumption 1965-2013

The project presented here sought to determine whether changes in anthropogenic thermal emission can have a measurable effect on temperature at the national level, taking Japan & Great Britain as type examples. Using energy consumption as a proxy for thermal emission, strong correlations (mean r2 = 0.90 & 0.89 respectively) are found between national equivalent heat output HO and temperature above background levels ∆t averaged over 5 to 8 year periods between 1965 and 2013, as opposed to weaker correlations for CMIP5 model temperatures above background levels ∆mt (mean r2 = 0.52 & 0.10). It is clear that the fluctuations in ∆t are better explained by energy consumption than by present climate models, and that energy consumption can contribute to climate change at the national level on these timescales.

It has long been known that within large cities, thermal emission from heated buildings, industry and transport can contribute to a microclimate up to 12°C warmer than background levels in the surrounding area, a phenomenon known as the Urban Heat Island (UHI) effect (Howard, 1833, Arakawa, 1937, Oke, 1973, Knight et al., 2010).

However, some of this heat difference is attributed to contrasts in evaporative cooling and albedo (Taha, 1997), absorbed and re-emitted solar radiation (Rizwan et al., 2008), and convection (Zhao et al., 2014). Here we consider thermal emission alone, but our study is not restricted to cities, but extends the concept to encompass heat generated by entire nations, thus including heat from smaller urban areas, rural districts and transport networks.

Weather systems do not respect political boundaries, so heat generated in one country could affect nations downwind. Japan and Britain are particularly suited to such a study, both being high population-density island nations largely isolated from the heat output of neighbouring countries by the surrounding ocean 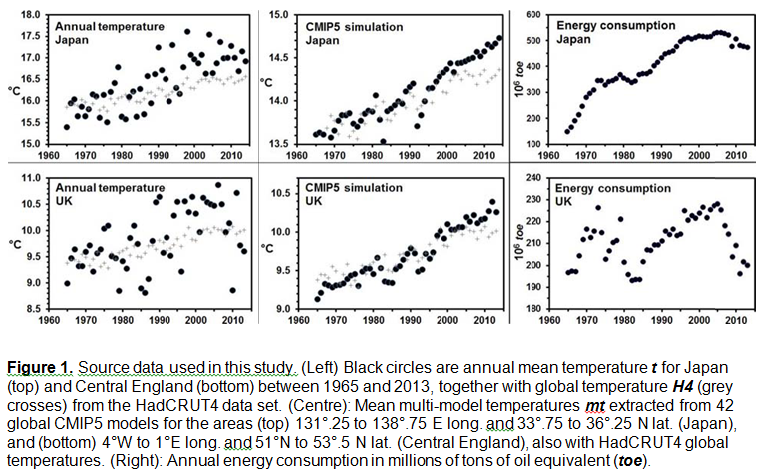 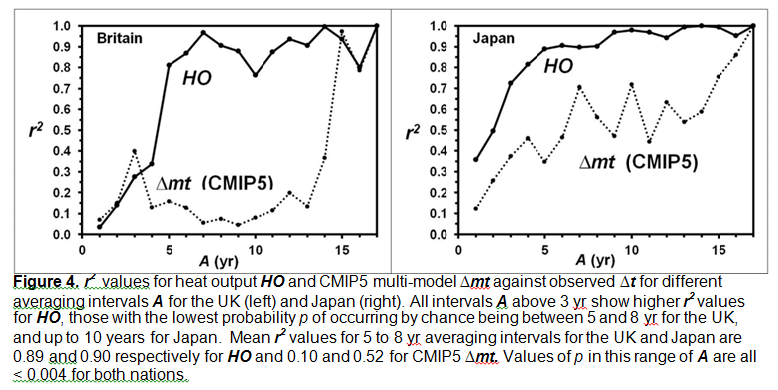 heating requirements, and 60-65% cloud cover (Norris and Wild, 2009). However, Japan’s more consistently increasing energy consumption parallels world CO2 levels, meaning that the correlations with ∆mt are consistently higher than the UK, so the distinction between the two models is not so pronounced.   Britain is better suited to this study, being cold enough to require  ndoor heating for about 6 months per year, and with 75% cloud co  er (Kontoes & Stakenborg, 1990), meaning that less surface-generated heat is lost by radiation. Most importantly, Britain is a country where annual energy consumption has fallen significantly as well as risen during the time period considered, so that the greater effect of heat output than other causes on UK temperature can be more clearly distinguished (Fig. 4, left).

The reliability and importance of our conclusions does not rest on the probabilities returned by our statistical tests, significant though these are by conventional standards:

It may seem that, reasonable though it is, our hypothesis is harder to justify quantitatively, in the sense that heat output (of order 1 J m-2 s-1 ) is much smaller than insolation, by two orders of magnitude. On the other hand, what is at issue is the relative importance of fluctuations in these quantities.

The fact that the statistically significant results require averaging over several years is due to the small area of the Earth’s surface being sampled in both locations. At this scale, temperatures vary widely from one year to the next compared to world values (Figure 1, left).

Our results are strong evidence that changes in energy consumption contribute to temperature change over sub-decadal timescales in the two nations considered. Britain has experienced a drop in temperature of about 0°.5 C since the early years of the millennium (Fig.2, lower left) at a time when world temperatures have remained virtually stable, whereas Japan experienced a rise in ∆t of 1°.0 C between the early 1980s and 2000 (Fig.2, upper left), double the world rise in temperature over the same period.

Both these changes reflect changes in energy consumption in each country.

These conclusions might be perceived to be in contrast to recent studies of the UHI effect that relate to large cities, where warming of only ~0°.1 per decade or less is detected compared to nearby rural districts (Jones, 2010, McCarthy et al., 2011).

However, such studies are designed to detect urban/rural contrasts, not the effects of overall increases or decreases in heat emission in entire nations. UHIs are most pronounced in calm weather (Oke, 1973, Wilby, 2003), and are best measured at such times (Knight et al., 2010).  Under average conditions, generated heat will drift downwind and may affect rural weather stations (Parker 2010). In addition, the problem of nearby road and urban development at long-lived rural control stations, which may have affected recorded temperatures, is discussed by Hansen et al. (2001). Certainly in Japan, Fujibe (2009) detected temperature anomalies from towns of population less than 1000.

Because anthropogenic heat is generated close to where temperatures are measured in both countries, we have not used a climate model to investigate the transport of such released heat further afield. Early attempts to do this globally found temperature variations of a similar order to the model’s natural fluctuations (Washington 1972), and Flanner (2009) found no significant effect for the present day. Oleson (2012) used CMIP5 simulations to model future changes in urban minus rural temperatures in response to changing climate over the 21st century, rather than the effects of changing energy consumption. More recently however, Zhang et al. (2013) despite including only 42% of world energy consumption in their model, found significant winter and autumn temperature changes up to 1° C in mid- and high- latitudes, far from heat sources, that correspond well to areas of previously unexplained differences between observed and modelled temperatures. Chen et al. (2014), entering anthropogenic heat flux into a refined model that included long wave radiation, found higher and more widespread increases over standard models: 1°-2° C in mid- to high-latitude areas of Eurasia, North America and parts of the southern hemisphere, and concluded that anthropogenic heating is an important factor in global warming that should not be ignored. Our study is the first of its kind that provides direct observational evidence of this.

If projections of energy consumption prove to be true, then future contributions of anthropogenic heat to climate change in Japan and the U.K. will have fallen by 2040. Japan is predicted to have an 18% fall (U.S. Energy Information Administration 2016), corresponding to a temperature drop of about 0°.3 C, and the U.K. a 3% fall (U.K. Dept. of Energy & Climate Change 2015), producing a negligible drop in temperature.