So we were sitting around the fire at the fish camp on the Colombia a few days ago, and a man said “Did you hear about the scientific study into meat preservatives?” We admitted our ignorance, and he started in. The story was like this:

“A few years ago there was a study done by some University, I can’t remember which one, but it was a major one. What they did was to examine the corpses of people who had died in Siberia, and those that had died in Washington State. Now of course the people in Siberia weren’t eating meat preservatives during their lives, and the Washington people were eating them. And when they dug up the graves and looked at the bodies, guess what they found?” 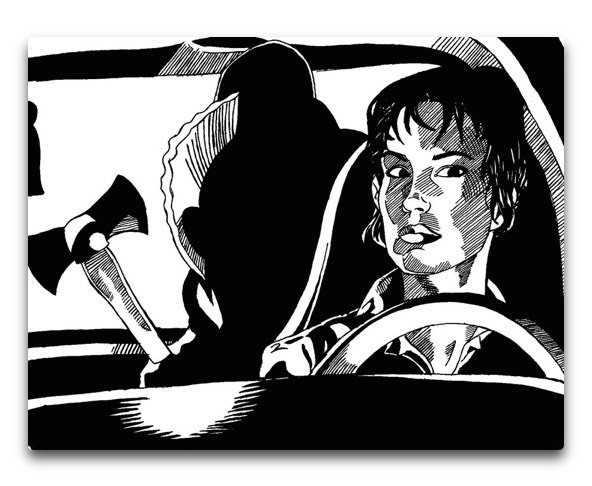 Urban Legend: The Killer In The Back Seat SOURCE

Well, by this time my Urban Legend Detector was going off so loudly that I was afraid the story teller would hear it ringing, so I just sat back to watch the denouement …

“The bodies of the Siberian people had decayed just like you’d expect … but the bodies of the people from the US were nearly perfectly intact, because of meat preservatives that they’d been eating!”

Now, as you might imagine, nothing about this story of meat preservatives is true. The preservatives are broken down in the digestive system and do nothing to preserve the human body … but not one person even questioned the story. This set me to pondering about what it is that makes for a good urban legend. Here are my conclusions.

• First, you must have some kind of lurking danger—premature death, a rat in the Kentucky Fried Chicken, a spider in a bee-hive hairdo, a killer in the back seat. It can’t be some trivial danger, either. It needs to be the loss of a kidney to organ thieves or something that big, not a hangnail.

• Next, the danger has to be avoidable by means of your own personal action. Don’t eat at KFC, don’t ingest meat preservatives, don’t wear a bee-hive hairdo for too long, look in the back seat before getting in.

• Next, there is often a strong undertone of performing a moral action. For some urban legends the moral action is the recommended avoidance action itself, like avoiding processed foods. But for all urban legends, there is an inherent and more basic moral good—the spreading of the story so that nobody else gets harmed. I mean, what could be more virtuous that seeing that your friends don’t get into trouble?

• Next, the story has to be amenable to change. Sooner or later, most urban legends wear out their impact, or people have heard it all before, or the “facts” become visibly untrue. The legends that survive do so because they shed their skins and morph into something more frightening, more dangerous, more demanding of immediate action.

• Next, it helps to have a villain—KFC, the meat-packing industry, just about any corporation, billionaires, any of those will beef up the story.

• Next, it needs impeccable but unverifiable credentials—I heard it on CNN, it was a study by a major university, three professors in Israel did research, that kind of pedigree.

• Next, details. Few people will believe a random legend that some woman somewhere stuck her hand in a pile of blankets and got snake-bit … but if the legend says “A woman in Arizona was shopping at the Phoenix Costco, and she was bitten by a brown snake that is only native to Australia” it has much more chance of being believed.

• Finally, the legend needs to be told with conviction. It won’t work if it is prefaced by “There’s some doubt about this, but …”

So … as some have already guessed, let me compare the current climate scare to an urban legend. We have:

• Lurking Huge Danger—heat death of the planet, increased floods, increased droughts, you name it. Note how alarmists routinely exaggerate the danger, claiming a few degrees of warming is “more dangerous than terrorism” and “the biggest danger the world faces” and the like.

• Avoidable—the claim is that if we all act nobly and eschew the evil carbon, the danger can be averted.

• Moral Action—not only is cutting down on personal or national CO2 emission seen today as the ultimate statement of the high moral ground, simply spreading the message has taken on the aspects of a religious duty.

• Amenable to Change—how many times have the alarmists been shown to be wrong, only to come back with some new threat, some new danger to keep the legend alive.

• Villains—the entire fossil fuel industry, Exxon, and “deniers” are all painted as villains in this morality tale.

• Unverifiable but Prestigious Credentials—we have two stalwarts, the “97% consensus”, and “the IPCC says”. The latter one has found its way into scientific papers, where people routinely cite something totally unverifiable like “IPCC Fifth Annual Assessment Report, Susan Solomon, Editor” as a way to lay a false claim to authorship.

• Bogus Details—my favorite was the claim that 37% of the species on earth would be killed by one degree of warming. See how much more believable this is than saying “if the earth warms lots of things will go extinct”?

• Conviction—man, if there is anything that most of the alarmists have an abundance of, it is the totally unshakeable conviction that not only are they right, they are so right and they are so moral that breaking the law is perfectly acceptable if it furthers their cause. And of course, they know that the legend will not work if they surround it with the usual scientific caveats, so it is told as certain impending doom.

Now, although it may not seem so, I do have a purpose in this story. My thought is that if we can understand why the urban legend of impending Thermageddon is so popular and so hard to kill, we will understand how to fight it. So let me look at each of the components to see where the weaknesses are and how we might utilize them.

• Lurking Huge Danger—I think the best way to fight this is laughter and absurdity. For example, I have compared the possible predicted change in temperature from Obama’s climate plan to the temperature difference between your head and your feet. Ridicule is a potent weapon.

• Moral Action—as I have pointed out repeatedly, increasing energy costs are the most regressive tax on the planet, and they hit the poor harder than anyone. This is a crucial point, because all of their flights of fancy are sustained by the illusion that they have the moral high ground … but shafting the poor as they are doing hardly meets that definition.

• Amenable to Change—we need to hold their feet to the fire regarding their BS, because they will disown it at a moment’s notice. Michael Mann’s phrase is that they’ve “moved on” … don’t let them do so without protest.

• Villains—we need to point out, over and over, that those that make life harder for the poor are the real villains in this morality tale.

• Bogus Details—again, ridicule is likely our greatest weapon in this arena. The biggest opportunity for this are the endless predictions of climate refugees, sea level rises, ice-free Arctic summers, and the like. Ask to see the corpses.

• Conviction—nothing we can do about that. Peter Gleick would likely maintain his convictions even if he were actually convicted for mail fraud as he richly deserves …

In closing, let me note that if my analysis is correct, this story of impending thermal doom CANNOT BE FOUGHT WITH SCIENCE. Why? Because it is an urban legend, not a scientific claim. As such it needs to be fought on its own ground, by attacking what actually keeps it alive … and that has very little to do with science.

My best regards to everyone, it’s a lovely afternoon, I’m going out to ride bike by Lake Tahoe.