From the “Paul Ehrlich is still spectacularly wrong” department:

A generation after leading scientists and experts warned the world of an escalating series of horrendous famines, the crop gluts continue. The latest kick in the pants to the Malthusian doomsayers is a bumper global wheat harvest. Defying not only the Club of Rome doomsayers, but also the climate Chicken Littles who have been warning about damage from rising temperatures to world agriculture, food production is booming even as meteorologists call July 2016 the hottest month ever.

The recent US winter wheat harvest was 45m tonnes, up 21 per cent from 2015, according to the US Department of Agriculture. Merchants who have run out of room in silos are piling wheat outdoors.Storage concerns are also growing in Russia, which is this year set to become the largest wheat exporter after hauling in more than 70m tonnes. In Canada, the government anticipates the second-largest wheat crop in 25 years, of 30.5m tonnes. Australia’s imminent wheat harvest is forecast at 26.5m tonnes, the most in five years.

This isn’t to say that there aren’t problems and worries in the world, but the combination of human ingenuity and the complexity of natural systems means that science is never quite as settled as publicity seeking scare mongers want people to think.

That good news is from The American Interest
But wait, there’s more:

From Marketwatch, record low wheat prices after harvest forecasts have been bumped up: 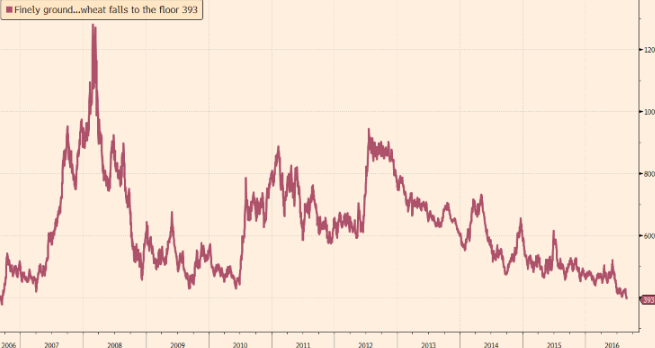 Harvest pressure here and abroad, record [crop] yields in the U.S., a record crop in Russia are all weighing on the markets,” said David Maloni, president of the American Restaurant Association Inc.

Earlier this month, the U.S. Department of Agriculture raised its estimate on Russian wheat production for the current crop year by 7 million metric tons to 72 million metric tons, citing “[e]xcellent growing conditions throughout the country and harvest reports showing very high yields.” It said that Russia is expected to be the world’s largest wheat exporter for the first time.

Meanwhile over at the National Climatic Data Center, they see worrisome temperature in bright red colors over Russia all year, saying it was the second warmest July ever.