[This is quite controversial and not my words. I’m especially interested in the author’s suggestion that success & education are more likely to predict terrorist activity.Thoughts? ]

By Barry Napier – Re-Blogged From http://www.iPatriot.com 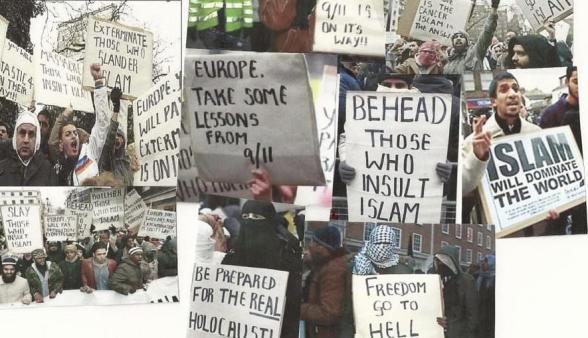 As I have shown in previous articles, Islam bases its claims on lies and deception (Taqiyya). Being untruthful about its reasons for existing is one of its propagandist ploys.

One of those excuses for violence is that Muslims are made poor by the West (?) and are poorly educated, so they rise up. For some reason this allows them to kill everybody who does not fit their particular set of values and descriptors! That Islamists killed from their inception, before there ever was a ‘West’, does not occur to our esteemed leaders.

Erasmus University, Rotterdam, gives actual facts, and those facts state that most who buy into ISIS and Islamic violence are, in fact, intelligent, educated, and fairly wealthy. This, of course, does not fit what Islamists are trying to say to the deluded West, and the deluded West doesn’t want to hear the truth, but seem intent on asking Islam to take over, to destroy them. Imagine if Churchill invited the Nazi SS to visit, and to take over Britain during the war!

Numbers of ISIS leaders grow with education. And most suicide bombers have high intelligence and qualifications! It makes no logical sense until one realises that the Western wealthy (and brazen Muslims) consume a large proportion of illicit drugs (because they are well educated and thus have highly paid jobs), and alcohol. Intelligence and education have no bearing on terrorism, except to promote it.

The UK’s MI5 says that two thirds of British terror suspects (Muslim, of course) are middle-class, and the most educated tend to be suicide bombers. (Gatestone Institute, 19th November). Also, it is the richest countries (both Islamic and Western) that provide the most recruits to ISIS.

What statistics show is that it is an Islamic lie that those who resort to violence and murder are poor and illiterate. Stupid, yes, but not poor or illiterate! And terrorists go far beyond the aims of the Nazis (kill all Jews) and the Stalinists (kill anyone with intelligence) – they want to obliterate the entire West.

Islamists don’t need reasons. They blindly follow Mohammed and WANT to bring all the deficits of Islam to the whole world – backwardness, poverty, economic failure, refusal to help fellow Muslims not of their brand, slavery and loss of freedom, rejection of criticism… the list of wondrous rewards of Islam is unlimited.

Forget Islamic propaganda. Islam exists to kill everyone who will not submit to Allah, or to enslave them as second-class citizens. To bring this about they must first lie and blame the West for its own wickedness and poverty, when, all along, Islamists don’t care about money and education or peace.

“There is a stereotype that young people from Europe who leave for Syria are victims of a society that does not accept them and does not offer them sufficient opportunities… Another common stereotype in the debate in Belgium is that, despite research which refutes this, radicalization is still far too often misunderstood as a process resulting from failed integration… I therefore dare say that the better young people are integrated, the greater the chance is that they radicalize. This hypothesis is supported by a lot of evidence.”  (Erasmus University, DSDe Standard, 2nd Feb, 2015).

French studies confirm these findings, which refute the Western idiocy that to defeat Islamic terrorism we must fund Islamic countries and get Muslims to integrate. Muslims who now come to the West DO NOT WANT to integrate. They KNOW they are very close to taking over the West, so they won’t bother to pretend any more. (Dounia Bouzar, Director of the centre for Prevention, Deradicalization and Individual Monitoring). It was found that of young people who travelled from France to join ISIS, two thirds were middle class with prospects, money and education. And the World Bank adds “Islamic State’s recruits are better educated than their fellow countrymen”. (The Telegraph, 6th October, 2016). So, the better educated Islamists want to blow their own brains out!

This is why we should be very happy that John Kerry is now out of the picture. It is he who ignorantly said that poverty and deprivation are “the root cause of terrorism”. Very socialist and very wrong and dangerous. Money sent to Islamic countries does not go on food, education or rebuilding. It goes on arms, especially in ‘Palestine’. Thankfully, goodbye Clinton and Obama!

As if to pour ridicule on Kerry’s and other Western nonsense, another report states that “The poorest countries in the world don’t have exceptional levels of terrorism”. (The Corner, 18th Feb., 2015). Terrorists don’t want jobs, don’t wish to integrate, have no compulsion to enjoy peace, hate the West. They simply wish to fill up the West with their Islamic children who will then take over everything, returning the entire West to medievalism. And this will be done by murder, mayhem and violence.

And of course, the pope, a random ‘unthinker’, alongside all socialists, teaches the mantra that terrorism is ‘caused’ by poverty, lack of education and jobs, depressed economies, and social unrest. What garbage. These countries are victims of their own pseudo-religion. It is a pseudo-religion because it isn’t a true religion but a manifesto for war, robbery, rape and death, a military-politico entity the world can do without. It has no interest in economies or social peace. Obey Allah or die, sums up the whole Islamic culture. Particularly Jews, Christians and wrong-branded Muslims. Even the land known throughout history as Judaea has been renamed ‘Palestine’ to placate terrorists – only it does not placate at all. They want obedience to their whims, and the death of all Jews, not peace.

With Trump now entering the White House (unless socialists kill him) perhaps reality will set in. The reality is very basic – Islam wants to kill us and make everyone literally eat dirt. Terrorism is about obedience to Allah, nothing else. Giving in to Islamic demands is just a prelude to complete destruction of the West. Islam will continue to lie about the ‘causes’ of terrorism, because the West laps it up. It is what socialists do – spread wealth to get rid of poverty. Except that when poverty is thus fed, money is frittered away and, in Islamic terms, can buy weapons and give big bucks to Islamic leaders only.

“If the West does not understand the real source of this hatred, but instead indulges in false excuses such as poverty, it will not win this war being waged against us.” (Giulio Meotti, Cultural Editor, II Foglio)