Estimates of future atmospheric CO2 values as a result of future emissions, called “scenarios”, fall into two camps—demand driven, and supply driven. A recent paper entitled “The implications of fossil fuel supply constraints on climate change projections: A supply-driven analysis” by J.Wang, et al., paywalled here, has a good description of the difference between demand and supply driven scenarios in their abstract:

Climate projections are based on emission scenarios.The emission scenarios used by the IPCC and by mainstream climate scientists are largely derived from the predicted demand for fossil fuels, and in our view take insufficient consideration of the constrained emissions that are likely, due to the depletion of these fuels.This paper, by contrast, takes a supply-side view of CO2 emission, and generates two supply-driven emission scenarios based on a comprehensive investigation of likely long-term pathways of fossil fuel production drawn from peer-reviewed literature published since 2000. The potential rapid increases in the supply of the non-conventional fossil fuels are also investigated. Climate projections calculated in this paper indicate that the future atmospheric CO2 concentration will not exceed 610 ppm in this century;

The obvious advantage of supply-driven projections is clear—they represent our best estimate of what will be physically possible based on our best estimates of how much fossil fuel we can actually produce over the coming century.

Here is their description of how they put together their best estimate of the future oil production.

We assembled 116 long-term forecasts for the global production of fossil fuels (oil, gas or coal), using peer-reviewed literature published since 2000, and recent reports from the mainstream energy forecasting agencies. These comprised 36 forecasts for conventional oil, 18 for conventional gas, 18 for coal, 29 for non-conventional oil and 15 for non-conventional gas. We assumed the forecasts to be equally likely, and statistically combined the range of possible combinations to yield median and probabilistic values for total global fossil fuel production.

Sounds like how I’d do it. Figure 1 shows their estimate of future conventional and unconventional fossil fuel production. 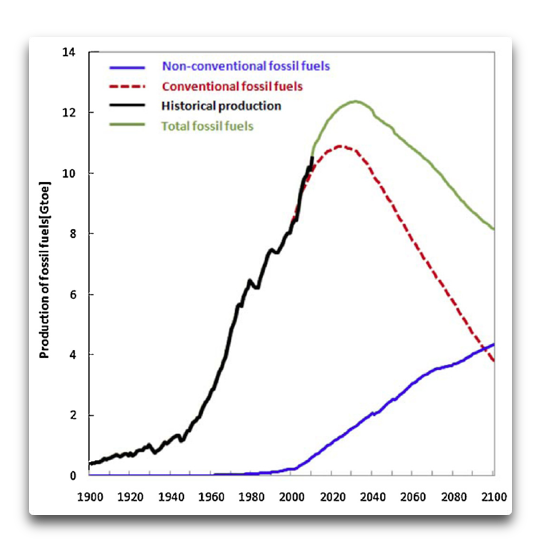 Figure 1. ORIGINAL CAPTION: Fig.1. Mean value of expected future supply of global fossil fuel resources, based on peer-reviewed literature and on forecasts from the mainstream energy institutes. Note that the production of coal is treated as solely a conventional fossil fuel; while both oil and gas production have conventional and nonconventional components.

I found this graph most interesting. I see that I’ve been mentally overestimating the effect of unconventional oil and gas on the total amount of fossil fuels that will be available over the 21st century.

Now that was interesting, but what was more interesting was that they compared their results to fourteen other supply-driven CO2 estimates that have been done since 2008. Here is that comparison.

Seeing that, I digitized the peak values for each of those sixteen scenarios. This gives me a distribution of best estimates of how high the atmospheric CO2 levels will go in the 21st century.

Finally, I converted those peak CO2 values to the corresponding temperature change that would happen IF the current central climate paradigm is true. This paradigm is the claim that temperature varies as some constant “lambda” times the variation in forcing (downwelling radiation). I do not think this paradigm is an accurate description of reality, but that’s a separate question. Their constant “lambda” is also called the “equilibrium climate sensitivity” or ECS.

The value of the climate equilibrium sensitivity constant (ECS) is the subject of great debate and uncertainty. For years the IPCC gave a range of 3 ± 1.5 degrees C of warming per doubling of CO2. In the most recent IPCC report, things were even more uncertain, with no central value being given.

Now the ECS, the equilibrium climate sensitivity, refers to the eventual projected temperature change measured hundreds of years after an instantaneous doubling of CO2. There is also a constant for the response to a gradual increase in CO2. This is called the Transient Climate Response, or “TCR”. Here’s a definition from Implications for climate sensitivity from the response to individual forcings, by Kate Marvel, Gavin Schmidt, et al.:

Climate sensitivity to doubled CO2 is a widely-used metric of the large-scale response to external forcing. Climate models predict a wide range for two commonly used definitions: the transient climate response (TCR: the warming after 70 years of CO2 concentrations that rise at 1% per year), and the equilibrium climate sensitivity (ECS: the equilibrium temperature change following a doubling of CO2 concentrations).

If we want to see what temperature change we can theoretically expect during the 21st century from the possible atmospheric CO2 scenarios shown in Figure 2, obviously the value to use is the TCR. However … just like with the ECS, the TCR is also the subject of great debate and uncertainty.

In the paper by Marvel et al. I just quoted from, they purport to calculate the ECS and the TCR from three observational datasets. Using the traditional methods they find an average TCR of 1.3 °C per doubling of CO2 (ECS = 1.9 °C/2xCO2). Dissatisfied with that result, they then adjusted the outcome by saying that one watt per square metre of forcing from CO2 has a different effect on the temperature from that of one watt per square metre of solar forcing, and so on. Is their adjustment valid? No way to know.

You will not be surprised, however, when I tell you that after their adjustment things are Worse Than We Feared™, with the transient climate response (TCR) now re-estimated at 1.8 °C per doubling of CO2 (ECS increases to 3.1 °C/2xCO2). I have used both the low and the high TCR estimates in the following analysis.

Please note that I am using their paradigm (temperature follows forcing) and their values for TCR. Let me emphasize that I do not think that the central paradigm is how the climate works. I am simply following through on their own logic using their own data.

Figure 3 shows a “boxplot” of the sixteen different estimates of the peak 21st century atmospheric CO2 concentration. To the left of the boxplot are the values of the extremes, the quartiles, and the median of the 16 atmospheric CO2 estimates. To the right of the boxplot I show the various estimates of the temperature change from the present IF the “temperature slavishly follows forcing” climate paradigm is true. Finally, the blue dots show the actual estimates of peak 21st century CO2 values. They are “jittered”, meaning moved slightly left and right so that they don’t overlap and obscure each other.

Figure 3. Boxplot of sixteen estimates of peak CO2 values in the 21st century, along with projected warming from the present temperature. Green area shows the “inter-quartile range”, the area that contains half of the data.

Now, recall that we are looking at estimates of the peak values of CO2 during the century. As a result, the temperatures shown at the right of Figure 3 are the maximum projected temperature rises given those assumptions about the future availability of fossil fuels.

So what all of this says is

The highest possible projected temperature rise from fossil fuel burning over the rest of the 21st century is on the order of three-quarters of a degree C.

The mid-range projected temperature rise is on the order of half a degree C. If one were to bet based on these results, that would be the best bet.

The lowest possible projected temperature rise is on the order of one or two tenths of a degree C.

Here’s the takeaway message. Using the most extreme of the 16 estimates of future CO2 levels along with the higher of the two TCR estimates, in other words looking at the worst case scenario, we are STILL not projected to reach one measly degree C of warming by the year 2100.

More to the point, the best bet given all the data we have is that there will only be a mere half a degree C of warming over the 21st century.

Can we call off the apocalypse now?