As diplomacy breaks down on the Korean Peninsula, all eyes are fixed on a pair of events that stand to either worsen or ease the tension mounting between the United States and North Korea. On April 25, North Korea celebrated the 85th anniversary of its military’s establishment, an occasion that has been accompanied by missile tests in the past and that now comes as expectations of a sixth nuclear test by Pyongyang rise. Then, three days after the North Korean military’s birthday, the U.N. Security Council will convene to discuss the country’s persistent march toward a demonstrable long-range nuclear weapons capability. And as the threat emanating from North Korea grows, Washington will be more and more likely to use the summit to call for heavier sanctions against its belligerent adversary.

Based on the completed review of Washington’s North Korea policy, the U.S. administration has no plan to respond to Pyongyang’s next nuclear test with military might. But U.S. President Donald Trump has taken every opportunity to show that he still considers all options — including a military strike — to be on the table.

This won’t, however, do much to change North Korea’s own calculations. Pyongyang no longer sees its nuclear weapons program as a chip to be bargained away for economic and security concessions from Washington. Instead, developing a credible nuclear deterrent has become a matter of national security, and a crucial one at that. North Korea will forge ahead with its nuclear program undeterred, bringing it one step closer to its final stage — and bringing the country closer to a clash with regional powers intent on stopping it.

In this, at least, the United States and China have found a common goal. But as the two embattled administrations have discovered, the mutual need to rein in North Korea can be as much a divisive force as a uniting one.

Sanction, or Be Sanctioned

The United States has both dangled carrots and brandished sticks in trying to secure China’s cooperation on North Korea. On one hand, Washington has begun to soften its tone on trade issues causing contention with Beijing in an apparent show of goodwill. On the other, the White House hasn’t been shy about issuing a clear ultimatum: Work with us to press North Korea into abandoning its nuclear program or suffer the consequences when we act alone. (This would likely take the form of secondary sanctions against China or a buildup of missile defenses in the region, each of which would create headaches in Beijing.) Washington’s message hasn’t fallen on deaf ears; China has already taken clear steps to cut down on cross-border trade, particularly in coal, and limit financial transactions with its unruly neighbor. Beijing has vowed to ensure that oil supplies flowing into North Korea will dry up if Pyongyang conducts another nuclear test.

Despite their seeming alignment, though, the United States and China have widely diverging objectives on the Korean Peninsula. By putting pressure on Pyongyang, Beijing is seeking to preempt a unilateral intervention by Washington, boost the remote prospects of Chinese-led negotiations and hedge against future trade friction with the United States — but not to sever North Korea’s economic lifelines. Washington, however, has made it clear that dialogue with Pyongyang will arise only if its purpose is to dismantle the North’s nuclear program. To that end, the United States relies on China’s economic leverage against North Korea as a primary means of altering Pyongyang’s behavior.

Washington’s decision to enlist Beijing against its neighbor and ally makes a good deal of sense. After all, China is North Korea’s primary source of economic support, which means its participation in any sanctions against Pyongyang is critical to their success. Washington has long seen Beijing’s lax enforcement of sanctions and exploitation of loopholes in previous sanctions regimes, as well as the access many Chinese banks and businesses maintain across the border, as acts of complicity in North Korean misdeeds.

It isn’t clear precisely what actions the United States will take against North Korea (whether unilaterally or through the United Nations), or by extension, what it will demand China do. That said, those demands will likely fall into two broad categories: stricter enforcement of U.N. Security Council trade resolutions, and the prevention of cross-border financial transactions and illegal arms smuggling.

No doubt, neither strategy will be easy to execute. For one, the U.N. resolutions banning imports of North Korean coal, copper, iron ore and fuel supplies make exceptions for “humanitarian purposes.” Pyongyang has made liberal use of this loophole to skirt the sanctions and continue sending its commodities to countries such as Russia. For another, slapping secondary sanctions on China to ensure better compliance with sanctions regimes will likely have a minimal effect on the Chinese companies doing business with their North Korean counterparts, since they have little exposure to the U.S. financial system. The move, moreover, could risk backlash from Beijing if major Chinese banks are caught up in the sanctions net. 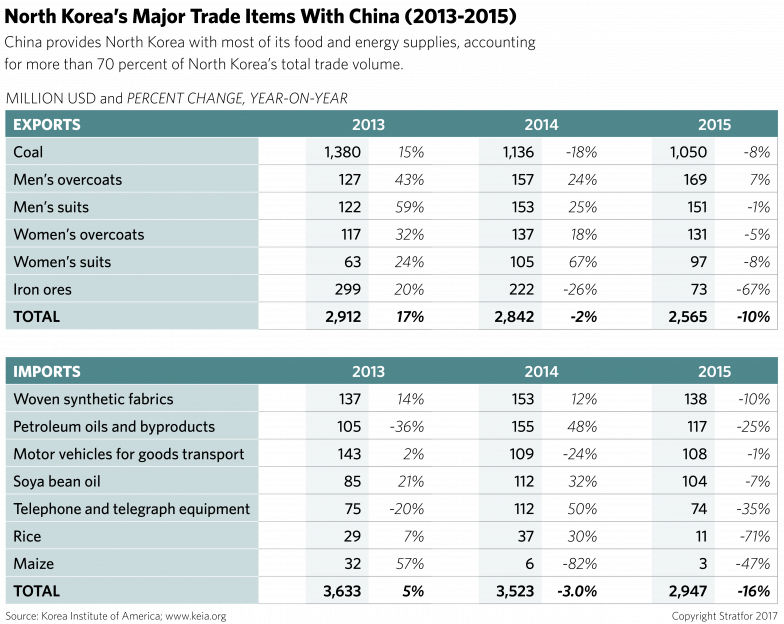 Given its desire to avoid antagonizing the United States, China may well be willing to more closely enforce existing sanctions — and comply with new ones — anyway. Yet even then, Beijing will only cooperate to the extent that it does not jeopardize the North Korean economy’s survival in the process. China would almost certainly view a complete cutoff in Pyongyang’s access to oil, food or international aid as a bridge too far, and a measure that would fly in the face of Beijing’s own imperative to maintain stable buffer states on its borders. This need explains why, despite China’s rising frustration with North Korea over the past few years, trade between the two has continued. (Even under the recent ban on coal imports, Beijing’s purchases of North Korean iron and other minerals have climbed sharply to compensate for the cutbacks.)

One of the greatest challenges to adding sanctions against North Korea, then, will be the difference in Washington and Beijing’s estimates of just how much pressure China can apply before North Korea collapses or lashes out. Of course, this also gives rise to a bigger question: Given the North Korean government’s resilience, would new sanctions even be enough to persuade Pyongyang to set aside its nuclear program? Decades of sanctions have hiked up the costs of developing its arsenal, to be sure, but they haven’t managed to halt or even slow its progress. There is also always the risk that exacerbating North Korea’s economic problems would push Pyongyang away from its only ally — Beijing — and toward tactics of last resort.

That the United States has once again turned to China to solve its North Korean problem speaks to its lack of viable alternatives. But Beijing’s choices for dealing with the pariah state are no less constrained. For decades, China has based its North Korea policy on several, often contradictory, goals: to ensure the existence of a pliable and stable buffer state on its doorstep; to keep the United States from expanding its security role in Northeast Asia; and to block the re-emergence of a unified peninsula.

So, China’s historical tolerance toward Pyongyang’s nuclear ambitions is hardly surprising. From Beijing’s perspective, the controversial program has been a necessary means of safeguarding the North Korean government’s grip on power and preventing a security vacuum that might invite U.S. interference. But as the prospect of a nuclear North Korea has shifted from a distant possibility to an impending threat, China has had to come to terms with a number of new and uncomfortable realities. South Korea, Japan and possibly Taiwan are eager to build a regional ballistic missile defense system led by the United States, perhaps even someday seeking nuclear weapons programs of their own. Meanwhile, as China has found itself less able to restrain the recalcitrant government in Pyongyang, the threat of military conflict on its border — or negotiations with Washington that exclude Beijing — has grown.

Faced with its own constraints and challenges, China will have to decide whether its long-standing strategy on North Korea is sustainable, and whether it is willing to accept another nuclear power in its backyard. Beijing is not without options; it could throw its full weight behind either Washington or Pyongyang, or do neither and preserve the status quo. But each path is riddled with potential pitfalls, and the time to choose one of them is running out.

Finding a diplomatic solution to the North Korean problem continues to be China’s best bet. Under ideal circumstances, Pyongyang would agree to suspend its nuclear program and join Beijing in bilateral or multilateral negotiations. China hasn’t given up on this outcome just yet: It has repeatedly called for the resumption of stalled peace talks. But with North Korea showing no interest in trading away its nuclear program, and the United States refusing to engage in negotiations without it, the likelihood of Beijing striking its grand bargain is low at this point.

Other avenues toward North Korean denuclearization would present even greater perils than those China currently faces. Intense debates are underway within Chinese policy circles to determine Beijing’s choices for addressing Pyongyang’s nuclear program, giving rise to proposals from offering North Korea a security guarantee to supporting a decapitation strike against the government of Kim Jong Un. The former, a substantial reversal of Beijing’s long-held policy of non-interference abroad, would not sway Pyongyang to abandon its nuclear project, while the latter would scarcely appeal to Beijing. Because ultimately, there is no guarantee that removing the obstinate leader would yield better results than simply leaving him in office, or that the United States would not seize the opportunity to extend its reach in China’s neighborhood.