Skip to content
HomePublic Pensions System: Insolvent to the Core

A truly worrying view of the U.S. public sector pensions deficits has been revealed in a new study by Joshua D. Raugh for Hoover Institution. Titled “Hidden Debt, Hidden Deficits” (see http://www.hoover.org/sites/default/files/research/docs/rauh_debtdeficits_36pp_final_digital_v2revised4-11.pdf) the study opens up with a dire warning we all have been aware of for some years now (emphasis is mine):  “Most state and local governments in the United States offer retirement benefits to their employees in the form of guaranteed pensions. To fund these promises, the governments contribute taxpayer money to public systems. Even under states’ own disclosures and optimistic assumptions about future investment returns, assets in the pension systems will be insufficient to pay for the pensions of current public employees and retirees. Taxpayer resources will eventually have to make up the difference.”

Some details: “most public pension systems across the United States still calculate both their pension costs and liabilities under the assumption that their contributed assets will achieve returns of 7.5–8 percent per year. This practice obscures the true extent of public sector liabilities.” In other words, public pension funds produce outright lies when it comes to the investment returns they promise to generate. This, in turn, generates delayed liabilities that are carried into the future, when realised returns come in at some 3-4 percent per annum, instead of promised 7.5-8 percent.

“What is in fact going on is that the governments are borrowing from workers and promising to repay that debt when they retire. The accounting standards allow the bulk of this debt to go unreported due to the assumption of high rates of return.”

Actually, what is really going on is that the governments create a binding contract with their employees to loot – at some point in the future – the general taxation funds to cover the shortfalls on these contracts. How much looting is on the pensions liabilities? Take the unfunded liability estimate of $4.738 trillion. And consider that in 2014, total revenues collected by state and local governments stood at $1.487 trillion. Pensions deficits alone amount to 3.2 times the underwriters’ income. In household comparative terms, this is like having a full 100% mortgage on a second home, while still running a full 100% mortgage on primary residence (day-to-day expenses).

Or, put more cogently, the entire system is insolvent. And is getting more insolvent, the longer the local and state governments refuse to use more honest accounting models.

Couple of charts to illustrate 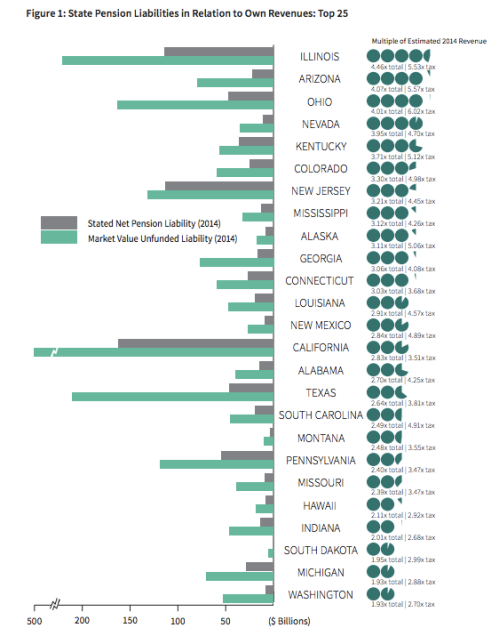 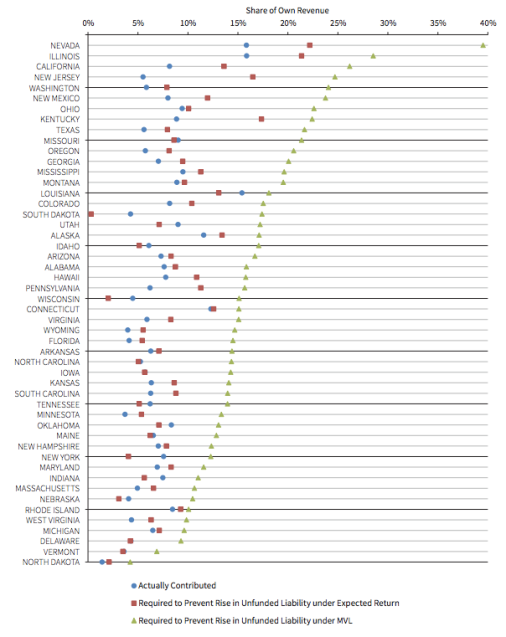 Now, observe in the above: the distance between the green triangle (required contributions) and the blue dot (actual contributions) is the gap in public pensions funding that has to be extracted to make the contracts whole. This will either have to come from tax hikes or from increased contributions from the public sector workers or from cut in future benefits to these workers. Or from all three.

In a range of the states, e.g. California, New Jersey, Illinois, etc we are already facing draconian levels of taxation, and falling real incomes of private sector workers. In a range of other states, municipal and local taxes are high, while the cost of living increases are swallowing income growth. In other words, there is not a snowball’s chance in hell these gaps can be funded from general taxation in the future.

When all ameliorating assumptions are made (to the upside for public pensions schemes), Raugh concludes that “despite markets that performed well during 2009–2014, state and local government pension systems are still underwater by $3.4 trillion. With relatively poor performance in fiscal years 2015 and the first part of 2016, this figure is likely to be even larger today. Finally, the report reveals the extent to which state and local governments are in fact not running balanced budgets. While they contribute 7.3 percent of their own-generated revenue to pensions, the true annual ex ante, accrual-basis cost of keeping pension liabilities from rising is 17.5 percent of state and local budgets. Even contributions of this magnitude would not begin to pay down the trillions of dollars of unfunded legacy liabilities.”

Yes, the entire system of public pensions is insolvent. No surprise there. And there is not enough fiscal space to recover from that insolvency without cutting benefits, raising taxes and hiking employee contributions. No surprise there either. Finally, although Raugh does not say so himself, it is pretty clear that there is zero will on either side of the Washington’s political divide to do anything tangible to address the problem.