[See bottom for a description of an El Nino. -Bob]

An hypothesis is presented that the cause of an EL Nino event is the reduction in the amount of dimming Sulfur Dioxide (SO2) aerosol emissions into the troposphere.

For the modern era, 1850 – present, the SO2 removal episodes are coincident with either business recessions, or environmentally-driven reductions in net global SO2 aerosol emissions.

One of the enduring questions regarding Earth’s climate has been what causes the onset of an El Nino event, because of their generally adverse impact upon the Earth’s weather. They are believed to have occurred for thousands of years, but up until now, the reason for their appearance has been the subject of much debate.

However, a recent discovery has identified both the cause and the timing of every El Nino event since 1850, and is directly applicable to all earlier eras of Earth’s history.

Between 1850 and the present, there have been 2 depressions and 31 business recessions within the United States. (1). ALL coincide with temporary increases in average global temperatures, and they speak to the size of the American economy. The temperature increases during a recession are typically about 0.2 deg. C, but since they are global averages, certain local temperatures would necessarily be much higher. See Figure 1, and Reference (1) 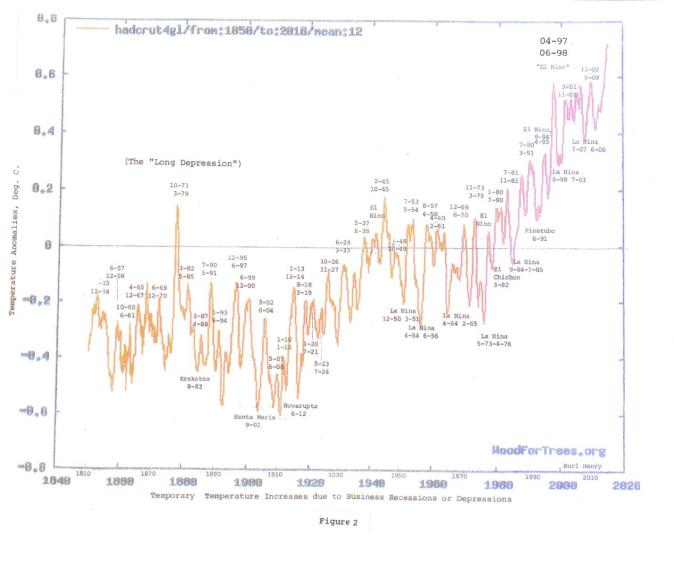 The temporary temperature increases are caused by fewer SO2 emissions into the troposphere during a business recession because of reduced industrial activity. The resultant less polluted air allows sunshine to strike the Earth’s surface with greater intensity, causing increased surface warming.

As expected, ERSST sea surface temperature fluctuations follow the same pattern (Figure 2), and, as it turns out, so does the occurrence of all El Ninos (Figure 3), and Reference (2). 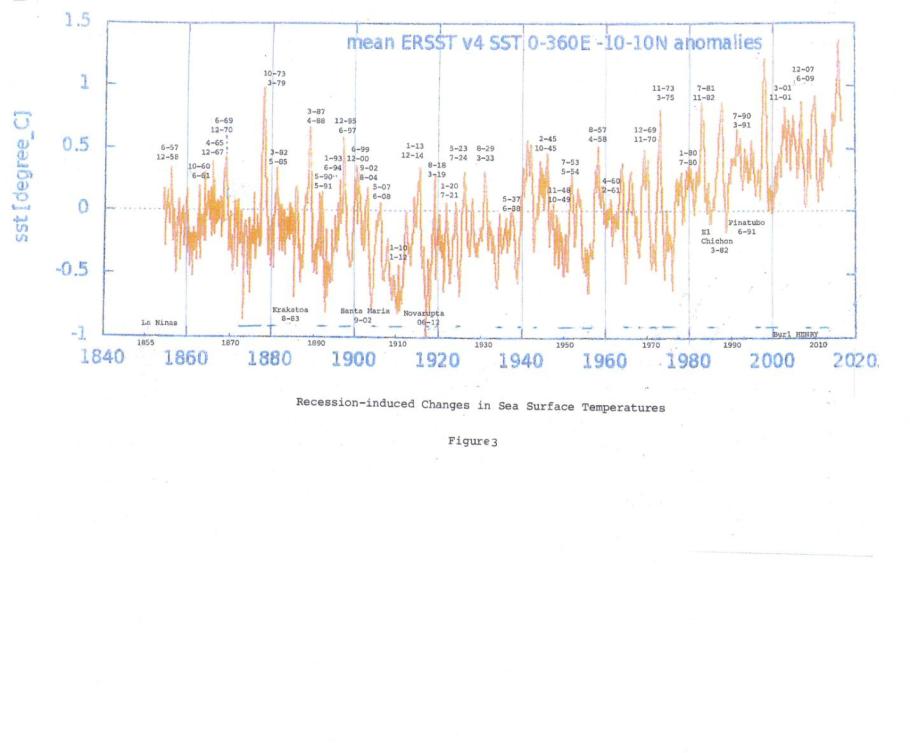 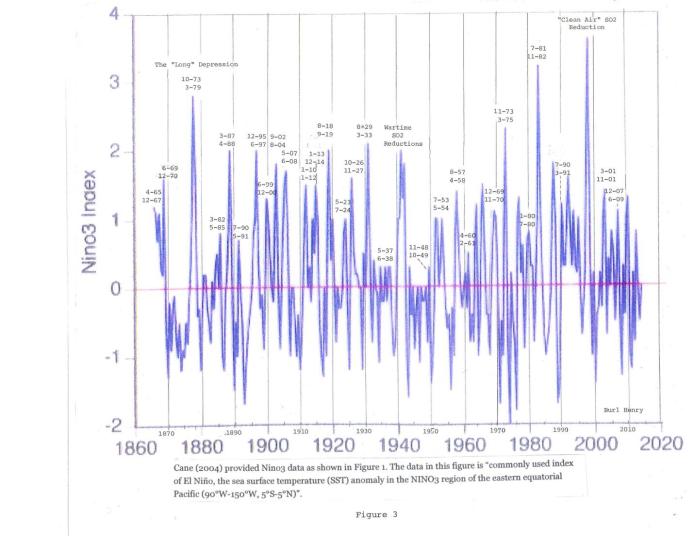 Here, sea surface temperature (SST) anomalies in the Pacific Nino 3.4 region cause an El Nino event whenever they reach or exceed 0.5 deg. C. for a “3 month running mean of ERSST.v4 SST anomalies”.

(The subsequent La Nina cooling is assisted (caused?) by the increase in dimming SO2 emissions as industrial activity resumes at the end of a recession).

However, since about 1970, there have also been El Ninos that are not associated with a business recession, the unlabeled peaks on Fig. 3. They are caused by environmentally-driven reductions in net global SO2 aerosol emissions, the most notable example being the El Nino of 1997-98 (more than 7 net Megatonnes of reductions in SO2 aerosol emissions ln the interval between 1995 and 2000). (3).

The recent Oct. 2014 – Jun. 2016 El Nino would also have been caused by net global reductions in SO2 aerosol emissions, but published data on the actual amount of the reduction is currently not available.

The mystery of what caused all of the El Ninos since 1850 has been solved. They were triggered by a temporary rise in average global temperatures due to reductions in SO2 aerosol emissions, either from industrial slowdowns during a recession, or, unfortunately, by Clean Air efforts.

As a result, the control knob for Earth’s climate is clearly the amount of SO2 aerosols in the atmosphere. This applies to the period analyzed, and, inescapably, to all other periods of Earth’s history, due to increases or decreases in sulfurous volcanic emissions. Their effect on Earth’s climate is so large that extensive volcanism would necessarily have led to the Ice Ages (and to rapid interglacials when the volcanism abated, and their dimming aerosols quickly settled out of the atmosphere).

Since about 1975, Clean Air-driven reductions in SO2 aerosol emissions have caused permanent increases in average global temperatures, currently reversible only by re-polluting the air (apart from temporary cooling due to a La Nina or a volcanic eruption).

Unfortunately, due to the reduction in SO2 aerosol emissions, average global temperatures have now risen to levels normally seen only during an El Nino event, so that we are now routinely experiencing the weather instabilities associated with their appearance.

To avoid even higher temperatures, it is essential that the continued world-wide reduction of SO2 aerosol emissions be halted, in so far as possible. Hopefully, mitigation strategies can be devised and implemented, thus enabling restoration of a more benign environment to areas now experiencing unusually high temperatures.

[An El Nino, or more formally ENSO (El Nino Southern Oscillation), is an irregularly cyclic event, initiated in the western Pacific Ocean. The tropical sun heats the water at the surface of the whole Pacific. Prevailing winds north of the equator are from the east, which ordinarily piles up water in the western Pacific, in an area known as the western warm pool. As the water piles up, some of the water already there is pushed down, causing a massive amount of warm water to significant depth to build up.

From time to time, the wind pattern shifts around to a west to east direction, allowing that warm water to spread out from the surface across the Pacific. This allows the warm water at depth to rise and spread as well. This major distribution of previously warmed water from the depths of the western warm pool, spread out across the Pacific, then causes the air above it to warm, giving what looks like a sudden jump in global temperature.

Though the warming El Nino half of the cycle lasts one, or sometimes two seasons, the cooling off phase, called La Nina, takes several years, as the resuming easterly winds return, sloshing the warm surface water back to the west and into the Indian Ocean and elsewhere.And, the cycle begins again as the western warm pool recharges.

ENSO was identified in the 1960s, but historical records and proxies have verified a long history with short term cycles lasting 3-5 years and longer cycles lasting around 60 years. Though nobody knows why ENSO cycles start and end, this paper describes one possibility, although it covers only the most recent history. BTW, correlation does not imply causation. -Bob]