Skip to content
HomeTurkey Poised to Roll Into Syria

Weeks after Turkish forces started to deploy in large numbers along the border with Syria, adjacent to the province of Idlib, Ankara appears to be on the verge of launching yet another significant military operation into the war-torn country. Unlike Operation Euphrates Shield, which targeted lands occupied by the Islamic State, the upcoming operation into Idlib will be directed toward lands occupied by Syrian rebels. As befitting a convoluted conflict such as Syria, Turkey’s advance into Idlib will be assisted by other Syrian rebel groups trained over time by Turkey in neighboring Aleppo province. And according to Turkish President Recep Tayyip Erdogan’s latest statements, they will be supported by Russian aviation.

Given that Turkey has for years directly supported rebel factions in Idlib in their fight against Russian- and Iranian-backed loyalist forces, the prospect of Turkish forces advancing into Syria under Russian air cover appears jarring at face value. The signs of a significant shift in direction by Turkey on Syria, however, have been visible for some time. The first indication was the Turkish abandonment of the rebel defense of Aleppo in favor of Operation Euphrates Shield in late 2016. This occurred amid steadily improving ties between Ankara and Moscow despite both sides maintaining opposite positions on the Syrian civil war, at least in principle. There were also increasing signs throughout 2017 of a significant drop in the flow of Turkish supplies to key rebel factions in northern Syria, particularly in Idlib. Turkey instead focused its resources on developing the capabilities of its Syrian rebel proxies that were directly under its management as part of Operation Euphrates Shield in northern Aleppo province.

The biggest shift in Turkey’s stance, however, came through the Astana process, where Turkey negotiated at length with Russia and Iran in a number of negotiation rounds in the Kazakh capital on the setup of “de-escalation” zones in Syria. These talks enabled the establishment of a “de-escalation” zone in Idlib, on whose borders Turkish troops are now poised alongside their rebel allies from Operation Euphrates Shield. 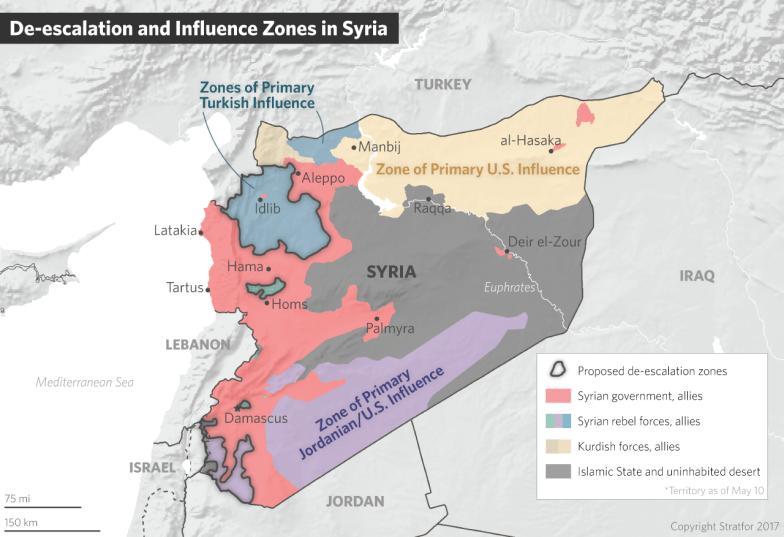 Turkey’s shifting position over the past 18 months that is now culminating with a military operation into rebel-held lands can be explained by three overarching factors. The first is the dawning realization in Ankara that the rebels it supported were on the losing end of a conflict with Iran- and Russia-backed loyalist forces. Every major loyalist victory that bolstered Syrian government control in northern Syria, in turn, diminished Turkey’s ability to influence events in the country.

The second factor was the growing power of independently minded rebel groups such as Hayat Tahrir al-Sham in northern Syria, particularly in Idlib province. As rebel forces suffered successive defeats and despaired from ever receiving enough external support to match the level of direct backing Iran and Russia gave loyalist forces on the battlefield, they became increasingly prone to defect and turn to the better resourced and organized hardline groups such as the al Qaeda-linked Hayat Tahrir al-Sham. This trend has only accelerated in recent months with the end of the CIA program that supplied rebel groups in Syria with key weaponry such as anti-tank guided missiles. Unlike the Syrian groups supported by Turkey — and previously by the United States — in northern Syria, Hayat Tahrir al-Sham has no compunction in upholding its own interests over Ankara’s. Indeed, in recent months, Hayat Tahrir al-Sham has even monopolized control over Idlib province by cracking down on Turkish-backed rebel groups. For Turkey, the rise of Hayat Tahrir al-Sham in Idlib threatens to entirely remove what little influence it has remaining in the province.

Finally, and most important, Turkey has consistently prioritized its goal of undermining and pushing back against Kurdish empowerment in Syria over its desire for regime change in Damascus. Before the United States started to provide significant support to the Kurdish-dominated Syrian Democratic Forces in 2015, and before the loyalists started to regain momentum in the conflict that same year, Turkey could undermine the Kurds and pursue regime change in Damascus through its support of rebel forces. However, as the U.S.-backed Kurdish forces spread their control over northern Syria and as the rebel hold was reduced through consecutive loyalist offensives, Turkey could no longer rely on weakened and distracted rebel forces to act as a bulwark against the Kurds, much less topple the regime of Syrian President Bashar al Assad. To that end, Ankara has increasingly prioritized an improved relationship with Moscow in the hopes that the influence leveraged through that relationship would allow it to counter the emboldened Kurds. For instance, Turkey still can hope to translate a cooperative mission in Idlib with the Russians into an opening for a subsequent operation against the Kurdish forces of the People’s Protection Units (YPG) in Afrin canton, which are thus far insulated by a Russian presence.

A Turkish operation into Idlib province is nevertheless not without considerable risk. Indeed, there is even a possibility that it could backfire on Ankara. First, there is still no guarantee that such an operation would translate into increased Russian assistance against the YPG and predominantly Kurdish Syria Democratic Forces. Moscow, after all, has maintained its ties with the Syrian Kurds and has even blocked Turkish operations against the Kurds in the past. Further, Turkey and its local rebel allies may find themselves going up against very determined resistance from Hayat Tahrir al-Sham fighters, many of whom are locals, and operating in terrain that is geographically more challenging than that faced by Turkey and its proxies during Operation Euphrates Shield. Turkey, however, appears determined to tolerate the risks as it seeks to expand its presence and control in Syria in pursuit of its greater objectives.