India has long looked east across the Bay of Bengal to Southeast Asia. Throughout its history, Indian traders and missionaries plying its waters for Malaysia and Indonesia brought Islam, Hinduism and Buddhism to the region with them. Those ties have lingered into the present, and Indian Prime Minister Narendra Modi has touched upon their shared cultural and religious connections through soft power diplomacy as part of his government’s Act East policy.

Seeking to expand India’s economic and strategic linkages to a region, which along with India encompasses 1.85 billion people and a combined gross domestic product of $3.8 trillion, Modi’s Act East policy is driven by a host of factors. These include moving to counterbalance the rise of Chinese regional influence, promoting Indian services and goods exports, and catalyzing the development of the country’s impoverished northeastern wing through infrastructure projects linking India with Myanmar, Thailand and beyond. Still, several obstacles stand between India and its goals, including protectionist barriers in Southeast Asian states to trade in the services sector, domestic fiscal constraints impeding progress on infrastructure projects and the limited size of the Indian trade sector.

In 1991 the near total depletion of India’s foreign exchange reserves precipitated a balance of payments crisis requiring emergency intervention from the International Monetary Fund. As that crisis unfolded, India watched its strongest international partner, the Soviet Union, collapse. The resulting shake-up in the global order gave Prime Minister Narasimha Rao and his finance minister, Manmohan Singh, the opportunity to advance the country’s ongoing processes of deregulation and globalization in a more categorical manner, marking a turning point for India’s economy.

Singh’s economic reforms took aim at the country’s independence-era policy emphasizing domestic industrial production over foreign imports, shifting its economic focus instead to exports and foreign investment as a means of promoting trade-oriented growth. The economic reforms dealt a blow to the Indian model of self-reliance championed by Jawaharlal Nehru, the country’s first prime minister, who sought to safeguard its autonomy in response to its history as a British colony. 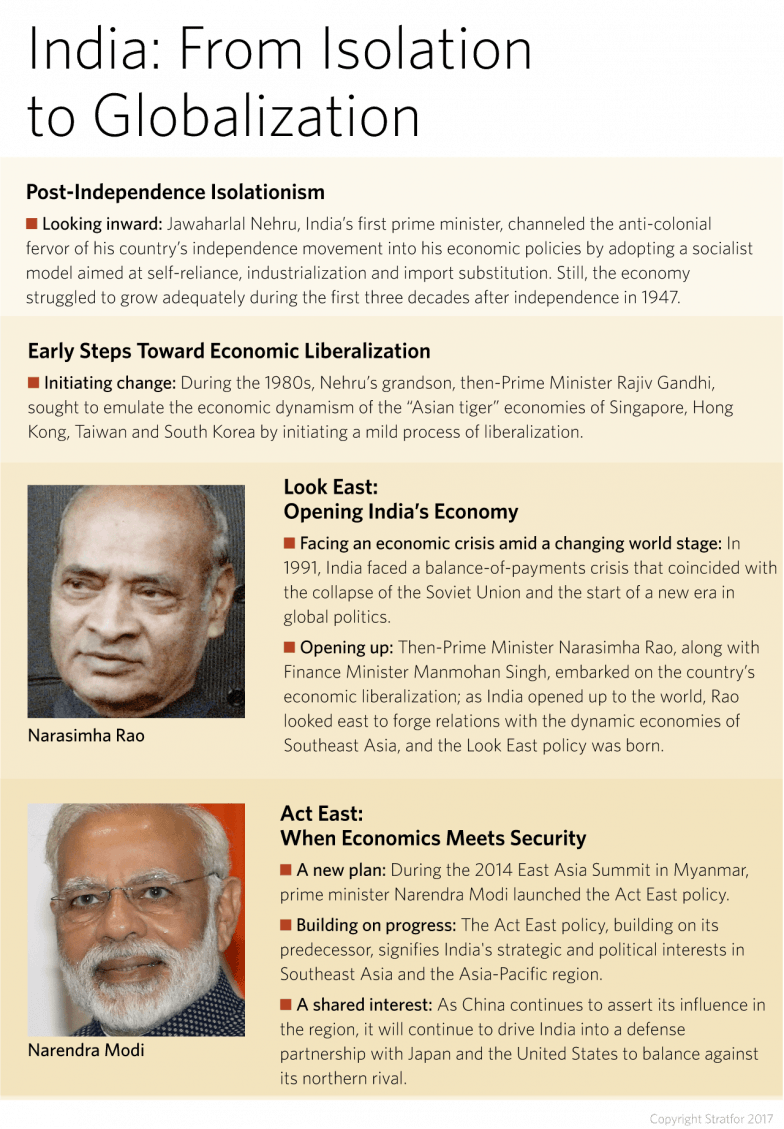 As economic growth accelerated and India began opening itself up to the world, Rao looked east toward the fast-growing economies of the Association of Southeast Asian Nations (ASEAN). His Look East initiative was part of a conscious effort by the government to reorient Indian trade toward Asia. And indeed, trade with ASEAN under successive administrations expanded, from $2 billion in 1992 to $72 billion in 2012.

From Look East to Act East

Since entering office in 2014, Modi has sought to further shed the vestiges of Nehru’s idealism in favor of a more driven, ambitious and pragmatic foreign policy that elevates India’s global profile. Economic diplomacy is a key element of Modi’s foreign policy: Attracting greater foreign investment and bolstering trade contributes to economic growth. The expectant rise in tax revenue, in turn, would allow the government to increase its defense budget to spend more on its navy, increasing its ability to project power more effectively. As part of this effort, Modi announced during the East Asia Summit in November 2014 that he was upgrading Look East to Act East, signifying that India was broadening its engagement beyond ASEAN to embrace other regional powers, including Australia, South Korea and Japan.

Broadly defined, two core components of Act East are economic and security. And among the core economic components is India’s trade with ASEAN. In 2016, total bilateral trade amounted to $75 billion, about 11 percent of India’s total global trade. Underpinning these trade flows are a host of agreements at the bilateral and multilateral level, including those between India and ASEAN over free trade and services and investments. Of India’s top five trading partners in the bloc — Indonesia, Singapore, Malaysia, Vietnam and Thailand — Singapore is unique for being both the largest ASEAN source of foreign direct investment in India and for accounting for about 97 percent of India’s information technology services exports — a key offensive interest in Indian trade negotiations.

But protectionism has stunted India’s efforts to boost this critical export sector. Namely, Singapore, a country in which nonresidents constitute almost 40 percent of the workforce, has increased its scrutiny of Indian IT visa applications in an effort to support local workers. Barring a change in Singaporean policy, this will remain a point of contention between the countries. Moreover, another constraint on expanding India’s ASEAN IT exports is economic: Specifically, ASEAN economies have a limited ability to afford India’s high-value IT exports. So in a bid to stimulate future demand in the developing ASEAN economies, India has set up IT training centers in Cambodia, Myanmar, Vietnam and Laos. Finally, the presence of free trade agreements hasn’t resulted in satisfactory tariff liberalization or the removal of non-tariff barriers on par with the ASEAN market access offered to China and Japan, which together account for close to 40 percent of the bloc’s trade, compared with India’s 3 percent.

Promoting the development of India’s impoverished northeastern wing is another key economic objective of the Act East policy. Because of poor infrastructure access in the region, which shares a 1,674-kilometer (1,040-mile) border with Myanmar, most of the trade between India and its ASEAN partners is conducted by sea. To rectify this situation, New Delhi has been working on two key infrastructure projects — the India-Myanmar-Thailand Trilateral Highway and the Kaladan Multi-Modal Transport project. The highway would link Moreh in Manipur province with Tak province in Thailand, providing an overland trade route into Southeast Asia. The Kaladan project, initiated in 2008, would connect the Indian port city of Kolkata in West Bengal with the port of Sittwe in Myanmar’s Rakhine state and extend back to India’s northeastern state of Mizoram. However, fiscal constraints and project management inefficiencies often slow infrastructure development in the rugged northeastern wing, suggesting delays in completing the connection between the region and, in turn, indicating that India’s land-based trade will continue to lag behind seaborne trade.

While trade is important, what truly distinguishes the Act East policy from its predecessor is its emphasis on an enhanced regional security role for India both within and beyond the ASEAN states as it seeks to keep China’s regional maritime ambitions in check. In this regard, the policy gels with Washington’s strategic pivot toward the Asia-Pacific in general, and in ensuring freedom of navigation in the South China Sea in particular. In fact, a shared rivalry with China is driving India, Japan and the United States toward closer military cooperation — demonstrated through the annual Malabar naval exercises, which took place this year in the Bay of Bengal. So long as China continues asserting its sovereignty in the region, this trend of security cooperation among the nations will only deepen.

Additionally, New Delhi and Tokyo are forging stronger bilateral relations, including a desire for greater cooperation on counterterrorism and joint military exercises. Economically, Japan has promised to invest $35 billion in India over the next five years. That includes a joint agreement to build a bullet rail line between Mumbai and Ahmedabad by 2022. And in what is seen as an answer to China’s Belt and Road Initiative, both have promoted the Asia-Africa Growth Corridor, a raft of infrastructure and development projects.

Concerns over growing Chinese influence is driving India, Japan, the United States and Australia to revive their quadrilateral dialogue, which had been moribund for a decade, during the upcoming East Asia Summit. For India, this calculation is also based on self-interest. It includes a strategy of imposing secondary costs on China on the maritime front in tandem with the United States in response to China’s foray into South Asia, a development India perceives as alarming. In a diplomatic signal of the importance the White House places upon India as the western anchor of its strategy to counter China’s expansionism, the administration has proved willing to use the term “Indo-Pacific” rather than “Asia-Pacific.”

As India seeks to expand its economic presence in Southeast Asia and beyond, the difficulties of securing greater market access and the slow pace of its infrastructure development will limit its push for greater trade relations as it addresses regional and internal security challenges in South Asia. But the rise of China will push India into asserting its own naval presence in the region alongside the United States. During his 2015 visit to Washington, Modi said, “When I look east, I see the western shores” of the United States. And for New Delhi, a region where the past mingles with the present will increasingly shape its future.

One thought on “To Counter China, India Pushes East”