The European Union will face numerous foreign policy challenges next year, ranging from negotiating new trade deals to dealing with problematic neighbors such as Russia and Turkey. The bloc will also continue its efforts to reduce the number of migrants arriving in Europe, both by cooperating with countries of origin and transit states and by trying to reform its asylum policies. As the European Union takes on these issues, it will strive to stay as united as possible — no small feat considering that its foreign policy is the product of compromise between member states with differing interests and priorities. Consequently, the Continental bloc is likely to operate as a reactive force, responding to events and adapting to new realities rather than taking the initiative.

A Year of Trade Negotiations

One of the European Union’s main foreign policy goals for 2018 will be to negotiate trade agreements with countries outside the bloc. Hashing out trade deals is easier said than done because EU members have varying priorities when it comes to trade. Countries such as France and Ireland, for example, are protective of their farmers, a stance that often makes agriculture a tricky subject to negotiate with partners beyond the bloc. For other EU countries like Germany, the flow of private data to outside states is a sensitive matter. And the mechanism to solve disputes between investors is a topic that will probably keep giving the bloc trouble in future negotiations.

Part of the European Union’s trade agenda next year will focus on enforcing recently signed agreements, such as the bloc’s deal with Canada. The pact, which entered force provisionally in September, won’t take full effect until after the national parliament of every EU member has ratified it. (So far, only five legislatures have approved the deal.) The European Union also will have to hammer out the contentious issue of investment protection in its trade deal with Japan, which the two sides finalized Dec. 8, before the European Council and European Parliament can approve it. Likewise, the bloc has several details to nail down with the Common Market of the South — better known by its Spanish acronym, Mercosur — as they near a trade deal.

Beyond closing the negotiations that are already underway, the European Union has plans to pursue more talks next year. The bloc, for example, is in the early stages of discussing trade deals with Australia and New Zealand, though the negotiations could be a difficult and lengthy endeavor. As a major agricultural exporter, Australia will probably try to secure access to the EU market for goods such as produce. But several European countries will be reluctant to grant that wish, meaning that the negotiations may extend beyond the European Commission’s target deadline of late 2019. Reaching a trade deal with India — which is scheduled to hold negotiations with the European Union in 2018 — promises to be no less challenging. The two began free trade talks in 2007 but stalled over issues such as investor protection. The European Union also plans to continue negotiations with Indonesia as part of a broader strategy to deepen its ties with the Association of Southeast Asian Nations. 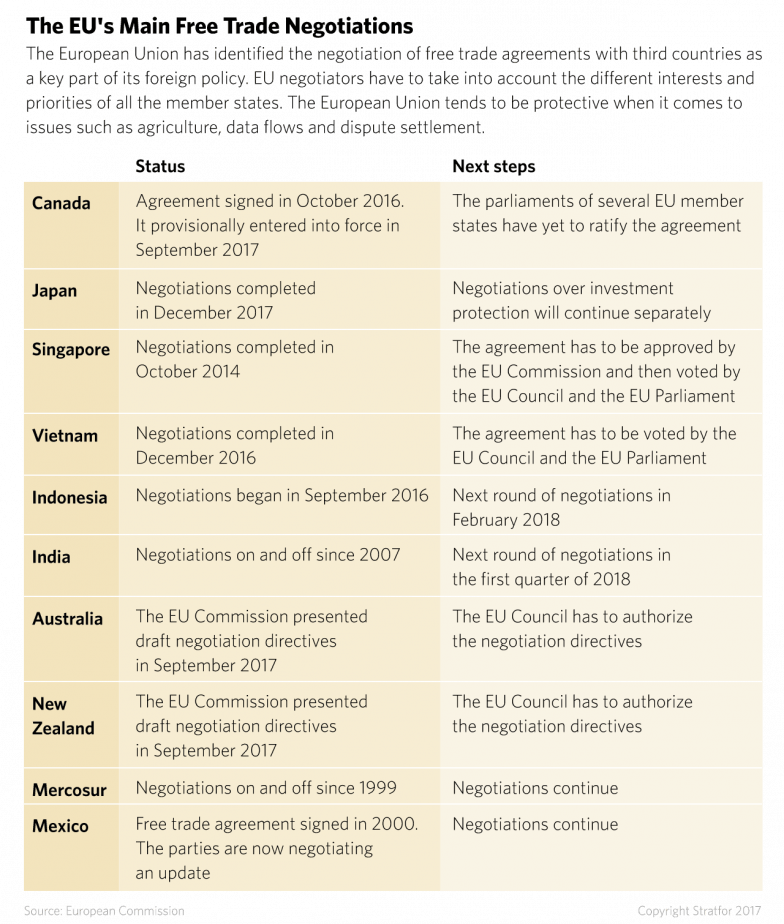 Trade talks won’t be the only topic on the European Union’s foreign agenda next year. The bloc will also have to manage some difficult relationships with nearby states. Russia, for example, will keep trying to exploit political and strategic divisions among EU members by supporting Euroskeptic parties across the Continent and using its well-oiled propaganda machine to influence European media, including social media. The European Union recently expressed concern about Russian propaganda and announced it would dedicate more money and resources to a task force charged with identifying and countering disinformation coming from its eastern neighbor. Italy’s next general election, which will take place by May 2018, will give Moscow a prime opportunity to use these tools, after all. The Kremlin has ties to three of the race’s four main contenders. The head of the center-right Forza Italia party, former Prime Minister Silvio Berlusconi, is a personal friend of Vladimir Putin, and members of the anti-establishment Five Star Movement have met several times with representatives from Russia’s ruling party. Both Italian parties have criticized the EU sanctions against Russia; should they reach power, they could push to lift the measures.

When handling Russia next year, the European Union will remain largely reactive. Brussels will continue pressuring Moscow to cooperate on a solution for the conflict in Ukraine, but the bloc will resist increasing its sanctions against Russia, even in the likely event that it votes to extend them again. Russia, meanwhile, will probably keep trying to disrupt the European Union, though it is unlikely to resort to using military force against a NATO member to test the alliance’s strength.

Relations between the European Union and Turkey will also be complex in the coming year. On the one hand, the European Union will continue using trade and the promise of closer ties with the bloc to keep Turkey aligned with its objectives. But on the other, Brussels will be ready to impose punitive measures on Ankara if Turkey’s political and social situation deteriorates further. Much as it has done with Russia, the European Union will wait for Turkey to make the first move before assessing a response. The bloc will be walking a fine line, however, aware that too much pressure could jeopardize its immigration deal with Turkey.

Finally, the European Union will have to deal with the countries of the Western Balkans, which aspire to join the bloc but probably won’t for at least a few more years. Brussels will have to find a way to address the fact that many Western and Northern EU governments oppose accepting new members while also keeping the dream of accession alive for countries such as Serbia, Macedonia and Bosnia. The prospect of EU membership, along with funding, helps keep the region’s ethnic tensions under control and provides states incentive to introduce institutional, economic and political reforms. Should the promise weaken, local leaders may turn to nationalism and conflict to retain power.

The third main foreign policy challenge for the European Union in 2018 will be to manage immigration from Africa and the Middle East. Under current EU rules, the country where asylum seekers first enter the bloc becomes responsible for them. This system puts disproportionate pressure on Mediterranean states such as Greece and Italy, which receive most of the migrants who reach the Continent by sea. The European Commission and several member states have proposed changes to EU migration policy over the years, to no avail. Next year, EU members will once again consider ways to reform the rules, including controversial measures to distribute asylum seekers more evenly across the bloc.

At the same time, the European Union will keep working with countries of origin, as well as transit states, to try to stem the flow of migrants onto the Continent and disrupt human trafficking operations. Political instability in recent years has turned Libya into a common point of departure for migrants trying to reach Europe by sea. During the EU-Africa summit in late November, European and African leaders agreed on a plan to dismantle the networks that smuggle migrants into the war-torn country and to repatriate migrants who are currently stranded there. The European Union already has increased its cooperation with authorities in Libya over the past few months; Italy in particular has assisted the Libyan coast guard with money, equipment and training. Though it has drawn criticism from human rights groups concerned about the way Libya treats migrants, Italy’s support has helped reduce the number of crossings from the North African country. According to data from the U.N. High Commissioner for Refugees, some 21,700 people arrived in Italy by sea between July and September this year, the lowest number for that period in the past four years.

Still, the migration problem is far from solved. The situation in Libya is volatile, and the country’s cooperation with the European Union could falter at any time. Furthermore, migrants are starting to use new routes departing from states such as Tunisia and Algeria. Spain, moreover, received 90 percent more migrants traveling by land or sea in the third quarter of this year than it did in the last three months of 2016. While most of these migrants hail from countries like Morocco, Ivory Coast and Guinea, a growing number of Syrian nationals are also arriving in Spain. In years past, by contrast, most Syrian asylum seekers have opted for the much shorter route through Turkey to reach the European Union.

On top of its foreign policy challenges, the European Union will weather an intense debate next year over proposals to reform the bloc. The discussion will create tension not only between northern and southern states but also between western and eastern members. This tension, in turn, will extend to foreign policy matters, since EU member states have different views on most of the issues on the table. Not all EU members feel the same sense of urgency about Russia or immigration, nor do they have the same priorities on trade. As is true of many other policy areas, the main challenge for EU diplomacy next year will be to speak with a single voice.