While this isn’t our normal fare here, the Internet is abuzz today over the admission from Apple Inc. that they purposely slowed down older iPhones, and I have something VERY interesting to add. Business insider has this headline:

Apple has long inspired an almost religious devotion among customers and tech aficionados — but it just seriously undermined its fans’ faith and loyalty.

The company on Wednesday acknowledged what some people have long suspected: that it has been secretly stifling the performance of older iPhones.

Critics have accused the company in the past, based on anecdotal evidence, of purposely slowing phones to compel users to upgrade to the latest model. While Apple admitted to the practice on Wednesday, it sought to underscore that it had done so for a purely altruistic reason: to prevent older phones from shutting down unexpectedly.

The justification hasn’t mollified Apple’s outraged fans. If anything, the company’s statement has stoked the conspiracy theories, and for good reason.

By the company’s own admission, it’s been throttling the performance of iPhones since last year.

Apple hasn’t explained why it didn’t disclose the practice until now, after GeekBench released charts based on its data that showed how older iPhones were not performing as quickly as they had when they launched.

Now here’s something very interesting, and very damning. This is a graph from Google Trends, which tracks how words are used in Internet searches on Google. I’ve done a search on the phrase “iPhone slow” which is what users that were frustrated with phone performance would likely search for looking for solutions. I’ve also added via annotations, the release dates of all iPhone models, and for comparison, the Google Trends results for the phrase “Android slow”.

The correlation is quite compelling: 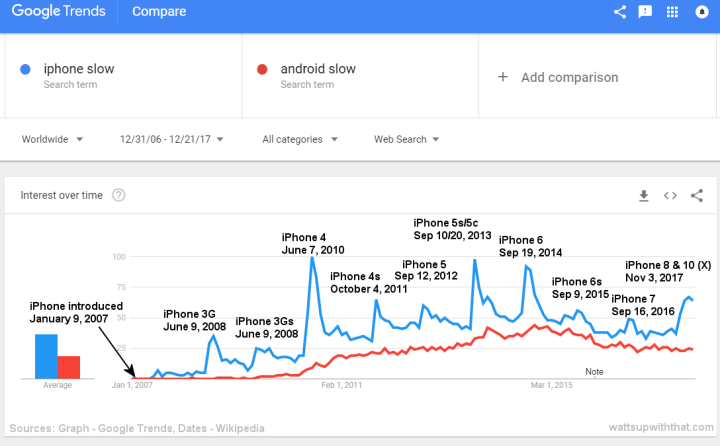 And, I’m not the first to make this correlation.

Around the time of each new iPhone release, searches about “slow iPhones” peaked. There doesn’t seem to be any similar spike pattern for Android based phones. (h/t to Jeremy James on Facebook for the idea)

That’s gonna leave a mark, as the quote in the Business Insider article said:

“For years, we’ve reassured people that no, Apple doesn’t secretly slow down their older iPhones to make them buy new ones,” the blogger and iPhone developer Marco Arment said in a tweet Wednesday. He added in a follow-up Twitter post: “The reputation damage from secretly slowing down old iPhones, regardless of the reason, will likely linger for a decade.”