By Larry Kummer – Re-Blogged From the Fabius Maximus website

Summary: Today’s post reviews a fun book about some of the systems that make us safe — but https://fabiusmaximus.com/2017/12/21/science-tamed-the-weather-keeping-us-safe-while-we-sleep/which we too often ignore or even mock. The headline is exaggeration for effect (progress has been beyond what most people would imagine a century ago, with more to come – but we’ll never fully “tame” nature). 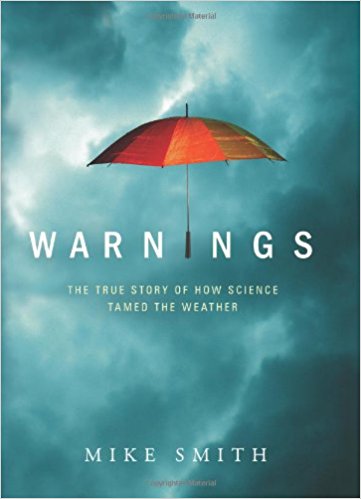 Review of Warnings: The True Story of How Science Tamed the Weather

The true story of how science tamed the weather.

Warnings tells a well-written and exciting story about natural disasters, the progress of science, and the workings of America’s bureaucracy. It is a story about the advances in meteorology (one of the many technologies which makes our world run) and a government service (the National Weather Service). Many Americans are oblivious or contemptuous of one — or both.

Warnings reminds us of how our world has become much safer since WWII as meteorologists provide ever-better warnings about destructive weather.

“In the 1920s, the annual death rate from tornadoes in the U.S. was approximately three per million people. In the early 1950s, with the beginning of a tornado warning system, the rate was still 1.5 deaths per million people. In the last three years, 2006 through 2009, the death rate was down to .068 deaths per million, a decrease of more than 95%! We’ve never needed a presidential “war on tornadoes,” simply because meteorologists have quietly taken care of it. They’ve brought us from seeing tornado deaths as an “inevitable part of population increase” to where we are today, with the lowest tornado-related death rates ever.”

Smith describes this progress using examples that showcase the work of a few pioneers and many skilled experts. They worked for both government agencies and private businesses, in a loose partnership that has evolved to exploit the advantages of each. At the beginning of that period, forecasting extreme weather (e.g., tornadoes) was considered too politically risk to even attempt. Now weather forecasting systems save thousands of live per year, avoiding threats some of which the public seldom even sees.

From a press release, apparently the writer has no clue that the NASA GISS data is a derivative of the NOAA data, and thus the claim of “NASA and NOAA each independently produce a record of Earth’s surface temperatures…” is untrue. They then go on to talk about “how much agreement there is”. Only government could be this ridiculous. – Anthony

WASHINGTON — U.S. government climate experts will announce new data on global temperature and precipitation conditions in 2012 during a news teleconference at 2 p.m. EST Tuesday, Jan. 15. NASA and NOAA scientists will discuss the new results and the year’s most significant weather and climate events.

NASA and NOAA each independently produce a record of Earth’s surface temperatures and changes based on historical observations over the land surface and oceans. Agreement between the two analyses, together with those produced by other countries, increases confidence in their accuracy. These analyses provide government, business and community leaders with critical data and information to make informed decisions.

The NASA and NOAA 2012 global temperature analyses will be issued in a news release one hour before the start of the teleconference.

Panelists for the teleconference include:

The briefing will be streamed live at:

“Since the crash of Delta 191 in 1985, there has been only one microburst-related crash of a U.S. airliner — the July 2, 1994, crash of U.S. Airways Flight 1016 at Charlotte, North Carolina, which killed 37 people. And even that crash could have been avoided if the flight crew had followed the avoidance procedures set out in the downburst training course. Given the ever-increasing number of people and planes in the air, the number of lives saved due to Fujita’s pioneering research that eventually led to implementation of microburst avoidance procedures in the United States is well over 2,000, not to mention the hundreds of millions of dollars of aircraft losses prevented.”

Smith describes this progress with a minimum of technical detail and many vivid stories. He describes what it feels like to chase tornadoes — accompanied by your fiancée, hoping she isn’t terrified enough to end the engagement (she didn’t). He describes the smell of a destroyed town, the struggle of innovators with hidebound bureaucrats, and the thrill of technical breakthroughs.

There are only (roughly) ten thousand practitioners of applied meteorology in the US, yet they have produced vast savings in money and lives. We grow ever more dependent on them.

“The only thing standing between the American public and huge annual death tolls from extreme weather is the weather warning system — a partnership of weather companies, the federal government, emergency managers, volunteer storm spotters, and the media. As coastal populations grow in areas vulnerable to hurricanes, as more people move into flood plains, and as megacities grow in tornado-prone areas, the warning system becomes more and more important.”

In Warnings, Smith tells us about the past in a way that gives us advice for the future. He discusses our often slow application of technical advances. For example, in nine years America put a man on the moon. It took twice that for America to build a network of Doppler radars to track tornadoes. Smith also describes decades of underfunding of our critical public infrastructure, and corporations’ weak support for that funding — even when it can save them money and prevent deaths of their customers.

Books like Warnings can help us better use the tools provided by scientists and engineers.

One reason for this underfunding is our amnesia about past progress, and how it has made our world so much safer. Probably future generations will be equally forgetful, no matter how far our tech advances. I can imagine that our descendents will read about asteroid and comet intercepts in their morning news, unaware of the devastation they would have caused in the past (the Chelyabinsk meteor was a 500 kiloton near-miss on 13 February 2013).

Warnings is on my list of recommended books and films. Take a look; it might give you a few ideas for you Holiday shopping.