Via James Delingpole at Breitbart – Re-Blogged From http://www.WattsUpWithThat.com

The National Oceanic and Atmospheric Administration (NOAA) has yet again been caught exaggerating  ‘global warming’ by fiddling with the raw temperature data.

This time, that data concerns the recent record-breaking cold across the northeastern U.S. which NOAA is trying to erase from history.

If you believe NOAA’s charts, there was nothing particularly unusual about this winter’s cold weather which caused sharks to freeze in the ocean and iguanas to drop out of trees.

Here is NOAA’s January 2018 chart for Northeast U.S. – an area which includes New England along with NY, PA, NJ, DE and MD.

You’d never guess from it that those regions had just experienced record-breaking cold, would you? 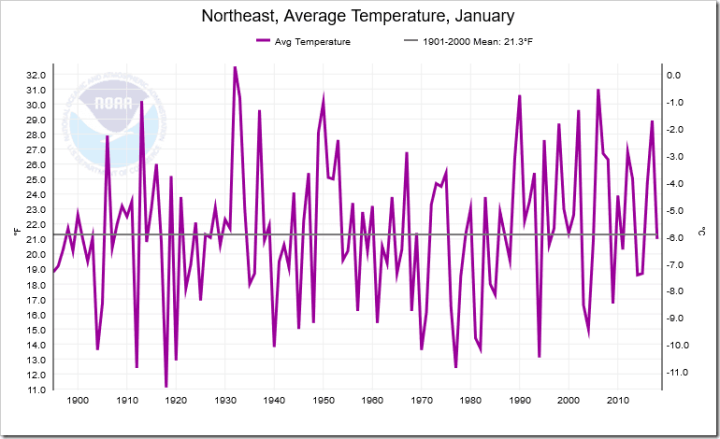 We’re not talking fractions of a degree, here. The adjustments amount to a whopping 3.1 degrees F. This takes us well beyond the regions of error margins or innocent mistakes and deep into the realm of fiction and political propaganda.

Homewood first smelt a rat when he examined the New York data sets.

He was particularly puzzled at NOAA’s treatment of the especially cold winter that ravaged New York in 2013/14, which he describes here