Skip to content
HomeTaking the Temperature of the Ukraine Conflict

As highlighted in the 2018 Annual Forecast, progress toward a deal to deploy U.N. peacekeepers to intervene in the conflict in Eastern Ukraine is distinctly possible. Recent signs of compromise over other aspects of that conflict, such as prisoner exchanges, indicate that the forecast is on track.

The idea of deploying U.N. peacekeepers to Eastern Ukraine was broached several months ago amid growing intensity in diplomacy surrounding the conflict between Russian-backed separatists and pro-government forces there. This weekend’s Munich Security Conference will offer a chance for more talks over the issue, but given the differences of opinion over the size, scope and mission of any U.N. force, there’s no guarantee that an agreement will be struck. But some signs of compromise over the peacekeepers issue — and the opportunity offered by the security gathering that will attract representatives from key powers — make real movement on the issue a possibility.

On Feb. 16, foreign ministers representing the Normandy Four countries (Russia, Ukraine, Germany and France), one of the primary negotiating formats of the Ukraine conflict, are expected to meet on the sidelines of the Munich gathering. Other key officials, including Ukrainian President Petro Poroshenko, U.S. Special Envoy to Ukraine Kurt Volker and possibly Russian presidential aide Vladislav Surkov, will also be at the conference, offering further opportunities for dialogue over Ukraine.

The chief subject for any talks they have will be the prospects for the U.N. peacekeeping deployment to Eastern Ukraine. In September 2017, Russian President Vladimir Putin offered the possibility that U.N. peacekeepers could be sent there. The motive behind the offer could be two-fold, giving Moscow an opening to stave off Western pressure while catalyzing diplomatic progress in long-stalled negotiations over the conflict. Diplomacy has indeed surged over the past five months since Putin’s suggestion. Volker and Surkov have been meeting on a regular basis and a wave of other talks have been held among Russian, Ukrainian and Western officials over the Ukraine conflict in general and the peacekeeping issue in particular. 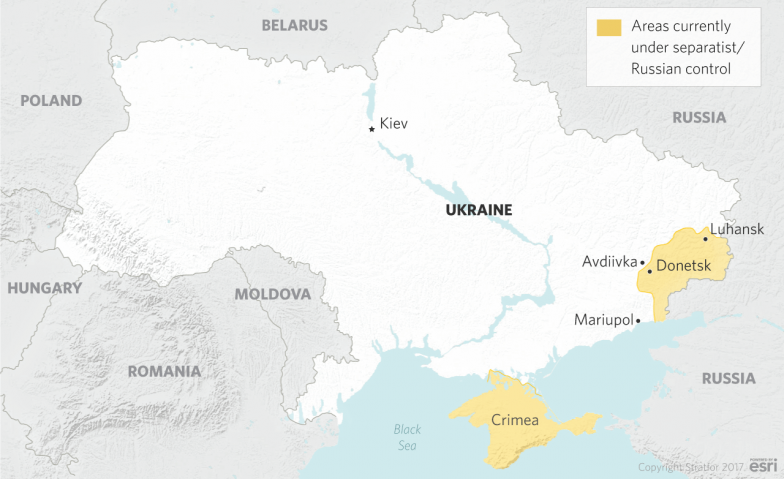 However, the flurry of negotiations has not so far moved the idea of peacekeepers closer to reality. Russia and Ukraine remain far apart over the size, scope and mission of any U.N. peacekeeping force. Moscow wants to limit peacekeepers to the line of contact between Ukrainian security forces and separatists and restrict their mission to providing protection for monitors from the Organization for Security and Co-operation in Europe. The government in Kiev, on the other hand, has called for peacekeepers to be granted access to all of Donbas — including along the border between Russia and the separatist territory across which Moscow provides supplies and personnel to sustain the rebel cause.

Recent developments indicate that a compromise between the two positions may be possible. Ukrainian and separatist forces conducted a major prisoner swap in November 2017, and on Feb. 13 Poroshenko and Putin held a rare phone call to discuss yet another prisoner exchange. The United States, Ukraine’s primary backer, and Russia have talked about a “phased approach,” in which peacekeepers would be deployed in incremental components: first to the line of contact, and then — as political and security conditions allow — perhaps deeper into Donbas. In January, Surkov called U.S. suggestions for such a strategy a “balanced approach,” promising that they would be studied “promptly and carefully” by Russia.

For all the positive talk to bear fruit, however, the details over the nature and context of such a deployment must first be ironed out. The following will be key issues to monitor for signs of progress as they relate to the negotiations: