From the Journal of International Climatology and the “if you can’t beat ’em, join ’em” department.

To me, this feels like vindication. For years, I’ve been pointing out just how bad the U.S. and Global Surface monitoring network has been. We’ve seen stations that are or pavement, at airports collecting jet exhaust, and failing instruments reading high, and right next to the heat output of air conditioning systems.

USHCN Climate station at the University of Arizona – in a parking lot Photo: Warren Meyer 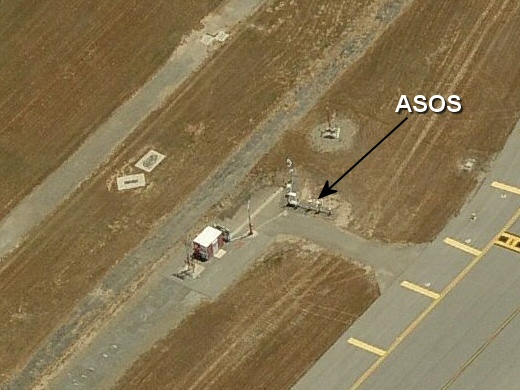 We’ve been told it “doesn’t matter” and that “the surface monitoring network is producing good data”. Behind the scenes though, we learned that NOAA/NCDC scrambled when we reported this, quietly closing some of the worst stations, while making feverish and desperate PR pitches to prop up the narrative of “good data”.

Read my report from 2009 on the state of the US Historical Climate Network: 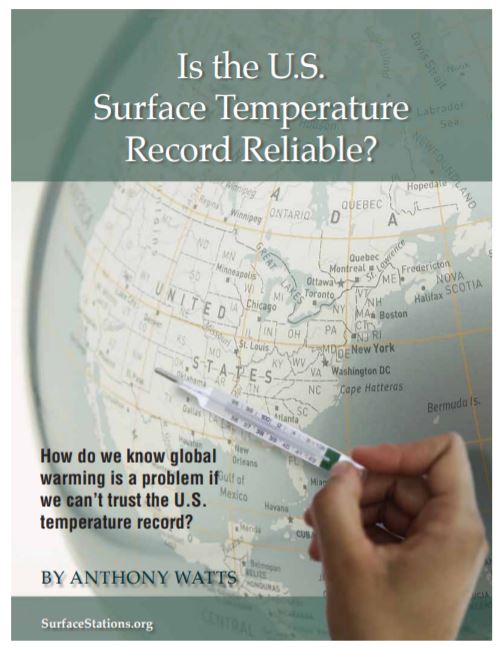 That 2009 report (published with the help of the Heartland Institute) spurred a firestorm of criticism, and an investigation and report by the U.S. Office of the Inspector General who wrote:

Lack of oversight, non-compliance and a lax review process for the State Department’s global climate change programs have led the Office of the Inspector General (OIG) to conclude that program data “cannot be consistently relied upon by decision-makers” and it cannot be ensured “that Federal funds were being spent in an appropriate manner.”

Read it all here: https://wattsupwiththat.com/2014/02/07/report-from-the-office-of-the-inspector-general-global-climate-change-program-data-may-be-unreliable/

More recently, I presented at AGU15 : Watts at #AGU15 The quality of temperature station siting matters for temperature trends

And showed just how bad the old surface network is in two graphs:

Now, some of the very same people who have scathingly criticized my efforts and the efforts of others to bring these weaknesses to the attention of the scientific community have essentially done an about-face, and authored a paper calling for a new global climate monitoring network like the United States Climate Reference Network (USCRN) which I have endorsed as the only suitable way to measure surface temperature and extract long term temperature trends.

During my recent trip to Kennedy Space Center (Thanks to generous donations from WUWT readers), I spotted an old-style airport ASOS weather station right next to one of the new USCRN stations, at the Shuttle Landing Facility runway, presumably placed there to study the difference between the two. Or, possibly, they just couldn’t trust the ASOS station when they most needed it -during a Shuttle landing where accurate temperature is of critical importance in calculating density altitude, and therefore the glide ratio. Comparing the data between the two is something I hope to do in a future post.

ASOS and USCRN climate monitoring station, side by side at the Shuttle Landing Facility at Kennedy Space Center. 2-28-18 Photo: Anthony Watts

Location of ASOS and USCRN sensors at the KSC Shuttle Landing Facility. Image: Google Earth with annotations by Anthony Watts

Clearly, with its selection of locations, triple redundant state of the art aspirated air temperature sensors, the USCRN station platform is the best possible way to measure long-term trends in 2 meter surface air temperature. Unfortunately, the public never sees the temperature reports from it in NOAA’s “State of the Climate” missives, but they instead rely on the antiquated and buggy surface COOP and GHCN network and it’s highly biased and then adjusted data.

So, for this group of people to call for a worldwide USCRN style temperature monitoring network, is not only a step in the right direction, but a clear indication that even though they won’t publicly admit to the unreliable and uncertain existing COOP/USHCN networks worldwide being “unfit for purpose” they are in fact endorsing the creation of a truly “fit for purpose” global system to monitor surface air temperature, one that won’t be highly biased by location, sensor/equipment issues, and have any need at all for adjustments.

I applaud the effort, and I’ll get behind it. Because by doing so, it puts an end to the relevance of NASA GISS and HadCRUT, whose operators (Gavin Schmidt and Phil Jones) are some of the most biased, condescending, and outright snotty scientists the world has ever seen. They should not be gatekeepers for the data, and this will end their lock on that distinction. To Phil Jones credit, he was a co-author of this new paper. Gavin Schmidt, predictably, was not.

This is something both climate skeptics and climate alarmists should be able to get behind and promote. More on that later.

Here’s the paper: (note they reference my work in the 2011 Fall et al. paper)

Abstract
There is overwhelming evidence that the climate system has warmed since the instigation of instrumental meteorological observations. The Fifth Assessment Report of the Intergovernmental Panel on Climate Change concluded that the evidence for warming was unequivocal. However, owing to imperfect measurements and ubiquitous changes in measurement networks and techniques, there remain uncertainties in many of the details of these historical changes. These uncertainties do not call into question the trend or overall magnitude of the changes in the global climate system. Rather, they act to make the picture less clear than it could be, particularly at the local scale where many decisions regarding adaptation choices will be required, both now and in the future. A set of high-quality long-term fiducial reference measurements of essential climate variables will enable future generations to make rigorous assessments of future climate change and variability, providing society with the best possible information to support future decisions. Here we propose that by implementing and maintaining a suitably stable and metrologically well-characterized global land surface climate fiducial reference measurements network, the present-day scientific community can bequeath to future generations a better set of observations. This will aid future adaptation decisions and help us to monitor and quantify the effectiveness of internationally agreed mitigation steps. This article provides the background, rationale, metrological principles, and practical considerations regarding what would be involved in such a network, and outlines the benefits which may accrue. The challenge, of course, is how to convert such a vision to a long-term sustainable capability providing the necessary well-characterized measurement series to the benefit of global science and future generations.

A suite of meteorological parameters has been measured using meteorological instrumentation for more than a century (e.g., Becker et al., 2013; Jones, 2016; Menne, Durre, Vose, Gleason, & Houston, 2012; Rennie et al., 2014; Willett et al., 2013, henceforth termed “historical observations”). Numerous analyses of these historical observations underpin much of our understanding of recent climatic changes and their causes (Hartmann et al., 2013). Taken together with measurements from satellites, weather balloons, and observations of changes in other relevant phenomena, these observational analyses underpin the Intergovernmental Panel on Climate Change conclusion that evidence of historical warming is “unequivocal” (Intergovernmental Panel on Climate Change, 2007 2007, 2013).

Changes in instrumentation were never intended to deliberately bias the climate record. Rather, the motivation was to either reduce costs and/or improve observations for the primary goal(s) of the networks, which was most often meteorological forecasting. The majority of changes have been localized and quasi-random in nature and so are amenable to statistical averaging of their effects. However, there have been regionally or globally