Skip to content
HomeThree Flashpoints in the Syrian Civil War

Since the start of the year, three prominent regions in the Syrian civil war have emerged as its current flashpoints: Afrin, Idlib and Damascus. These hotbeds of military activity represent the intersection of the various proxy battles underway in Syria. Turkey, Russia, Iran, the Syrian government, and the many loyalist and rebel militant groups active throughout the country all have unique goals. In the flashpoint regions, however, their objectives are overlapping to move the Syrian conflict into a new, more static phase. As these three remaining major offensives wane in the coming months, they will give way to constant deadly skirmishes and attacks along the front lines, with few significant changes in territorial control.

The Turks in Afrin

The region of Afrin in northern Syria became a growing focal point in January when Turkey and its Syrian rebel allies launched Operation Olive Branch. The large military incursion aimed to wrest control of Afrin from the People’s Protection Units (also known by the Kurdish abbreviation YPG), a Kurdish militia. Russian troops were already in the area to block the Turkish invasion and could have seriously heightened the hostilities. But Russia and Turkey’s interests aligned just enough that Ankara could persuade Moscow to withdraw its forces.

In a bid to slowly exit the Syrian civil war, Russia has been working to set up a “de-escalation zone” in the nearby province of Idlib — and Turkey has been a vital ally in these efforts. By leveraging its importance to Moscow’s plan for stabilizing the war, Turkey managed to pursue its mission in Afrin with little interference from Russian troops. Turkish cooperation, after all, is a far more valuable asset to Russia than is the YPG. 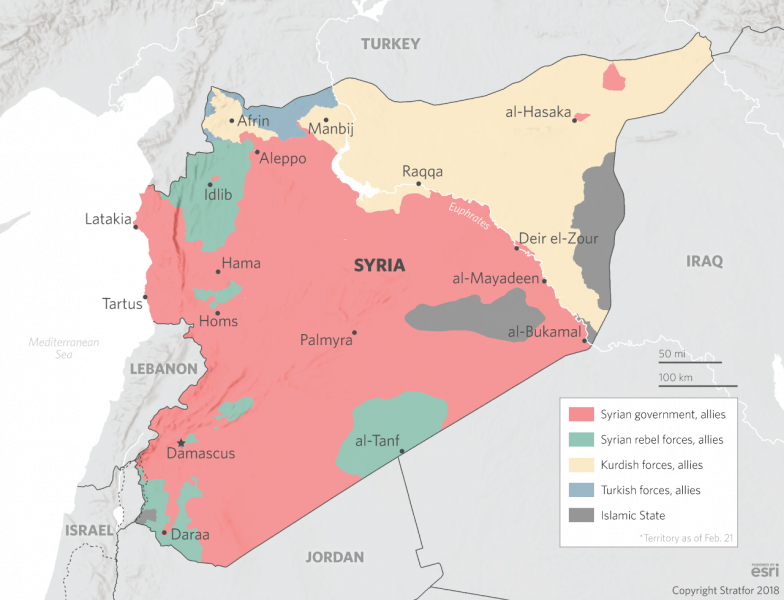 Yet even though the Turkish operation is proceeding as planned, the Afrin region will not be free from conflict once it’s complete. Turkey is increasingly likely to clash with another key player in Syria: Iran. Unlike Moscow, Tehran has no interest in slowly extricating itself from the war. Iran is still committed to winning a comprehensive military victory alongside its Syrian government ally and won’t stand by as its traditional regional competitor, Turkey, penetrates even deeper into the fight. To that end, Tehran has encouraged Syrian government forces to try to regain control of Afrin through a political deal with the YPG. At the same time, Damascus and Tehran have escalated their proxy conflict with Turkey by dispatching Iranian-linked Syrian militias to the area.

The Rebel Civil War in Idlib

As Turkish troops advance in Afrin, Ankara is also getting more involved in the neighboring region of Idlib, where it has joined Russia to set up a de-escalation zone. Turkey benefits from this partnership in a few ways. Beyond getting on Russia’s good side for the Afrin operation, Turkey can use its involvement in Idlib to bolster its own position in the region. Turkish forces will be better able to prevent Syrian loyalist offensives and offer support for their preferred rebel proxy groups there as a result.

While Turkish military convoys are streaming into Idlib to set up posts for monitoring the de-escalation agreement, a battle is raging between the various rebel groups. The militants in Idlib have never been unified, and at this point they fall mostly into two camps: those who are more closely allied with the Turkish military and those who are more independent and extreme. The largest rebel group in the first camp is Jabhat Tahrir Souriya, which formed after Ahrar al-Sham and Nour al-Din al-Zinki merged. The largest rebel group in the second category, meanwhile, is Hayat Tahrir al-Sham, which was previously linked with al Qaeda. Buoyed by the expanded Turkish military presence, and likely encouraged by Ankara, Jabhat Tahrir Souriya and smaller groups have begun to assert more control over Idlib, driving Hayat Tahrir al-Sham out of several important locations. The trend indicates that Turkish troops and their affiliated rebel forces will strengthen their control of the area.

The Battle for Damascus

Because the Turkish-Russian partnership is preventing Iran and the Syrian government from attempting more offensives in northwest Syria, they have instead trained their focus on Damascus and the surrounding area in the southwest. Thousands of loyalist forces have been making their way to the capital city, intent on seizing the remaining rebel strongholds nearby. Russia wholeheartedly supports the operation, treating it as compensation for Iran and the loyalists’ help in creating the de-escalation zone at the expense of their advances on Idlib. Furthermore, Moscow sees a powerful loyalist offensive in Damascus as a smart move, since it believes that the isolated rebel positions in southern Syria are particularly vulnerable to a military assault.

Though the loyalists will face little resistance from other major foreign powers as they fight for Damascus, the operations will be tumultuous nonetheless. Their reliance on indiscriminate bombing will make for a bloody battle marked by high civilian casualties. Outside the region, the loyalists are likely to expand their operations to include Daraa and Quneitra in the south. The advance may well bring the Iranian-backed forces closer to Israeli forces in the Golan Heights, increasing the chances of further skirmishes between the two.

A New Phase in the War

In the wake of the events in Afrin, Idlib and Damascus over the coming months, massive offensive battles will become less and less common in the Syrian civil war. The amount of territory controlled by militants with no state alliances is shrinking, and the front lines of the battlefields are gradually becoming fixed: The Turkish-rebel alliance broadly controls the zone in the northwest, the U.S.-backed Syrian Democratic Forces dominate the east, and the Iranian- and Russian-backed Syrian government are holding strong in the west and south.

But static front lines don’t preclude conflict, or the potential for escalation. Though large offensives may become scarce, violence along the front lines will remain a constant as every side of the fight continues to look for an advantage. With so many foreign forces spread throughout Syria, moreover, the many proxy conflicts in the country run the risk of turning into a full-blown international war. If that happens, the Syrian civil war could enter an even bloodier phase.

One thought on “Three Flashpoints in the Syrian Civil War”