For parents in much of the world, the beginning of December is a harbinger for the scramble to secure the year’s hottest game or electronic gadget ahead of the holidays. And as battery technology continues to improve and costs decline, it has touched off another scramble of its own, as the manufacturers of batteries for everything from smartphones to electric vehicles chase after raw materials like cobalt, an invaluable component in such objects. Right at the center of this frenzy is the Democratic Republic of the Congo, which holds roughly 50 percent of the world’s cobalt reserves. But with President Joseph Kabila and his government looking to grab a greater share of mineral revenue while avoiding any additional international pressure that could threaten Kabila’s hold on power, Kinshasa and international mining companies might soon find themselves on a collision course.

The Scramble for Supply

The price of cobalt has skyrocketed over the past year, as numerous companies have sought to negotiate long-term contracts with cobalt miners to ensure guaranteed access to the metal, which is an essential component for most lithium-ion batteries. Demand for cobalt, however, is limited in how much it can boost production growth, as cobalt is a byproduct of copper mining, meaning global demand for the latter still drives much of the world’s cobalt production. With cobalt supplies thus constrained, battery makers and other users are keen to ensure as stable a supply as possible, often in the form of long-term contracts. As demand for electric vehicles increases, battery makers and users of consumer electronics will compete with the producers (and users) of batteries for new-generation cars to access cobalt supplies. The latest to enter the fray is Apple, which has revealed continuing talks to secure thousands of metric tons of cobalt directly from mining companies. Apple’s moves came after Korean battery maker SK Innovation agreed to a supply contract of at least seven years with Australian Mines’ Queensland operation. The Chinese, who have a large interest in the country, are also searching to secure supplies, as Fujian-based battery maker CATL recently signed a long-term contract with Glencore, a mining and processing company with extensive operations in the Democratic Republic of the Congo, to supply batteries for major automobile manufacturers.

Industry leaders will continue to tread a well-worn path to the African giant in the short term, as the country will dominate supply for the next several years.

Industry leaders will continue to tread a well-worn path to the African giant in the short term, as the country will dominate supply for the next several years. Alternative projects that do not carry the same amount of ethical or political risk as Congolese cobalt are in the works, but they are not yet (and perhaps never will be) able to replace Kinshasa’s capacity. Projects in Australia could benefit from close proximity to China, while smaller projects in Canada are likely to begin operations in three to five years.

The Democratic Republic of the Congo traditionally has experienced difficulty in converting its mineral wealth into widespread economic growth, especially as a result of graft. In November 2017, Bloomberg reported that $750 million in royalties and other payments to state-owned mining company Gecamines had disappeared, representing around two-thirds of what it should have acquired over a three-year time period. Accordingly, the country will remain an unavoidable quagmire for mining companies interested in exploiting global cobalt demand. Yet the promise of its riches will continue to entice investors. And because of this attention, the country’s political future will remain of particular interest to mining companies.

Grabbing a Greater Piece of the Pie

In an effort to better leverage the country’s mineral wealth, the Congolese parliament passed legislation in January to increase royalties on “strategic minerals” like cobalt from 2 percent to as much as 10 percent. Legislators forwarded the bill to Kabila for approval, but he took no immediate action, even though the country’s constitution stipulates that the president must sign any bill within 15 days of receiving it. (According to public statements, Kabila received the bill no later than Feb. 7.) His failure to issue formal approval leaves the entire legal process wrapped in uncertainty, although recent statements from the government imply that a signature is imminent. The formal implementation of the law will require the renegotiation of mining contracts, and mining companies already have threatened international arbitration should this occur. Western and Chinese companies alike have joined forces to lobby the government, while Switzerland (where Glencore is based) recently slapped sanctions on several Congolese individuals allied with Kabila amid accusations that they interfered with elections and engaged in human rights violations. 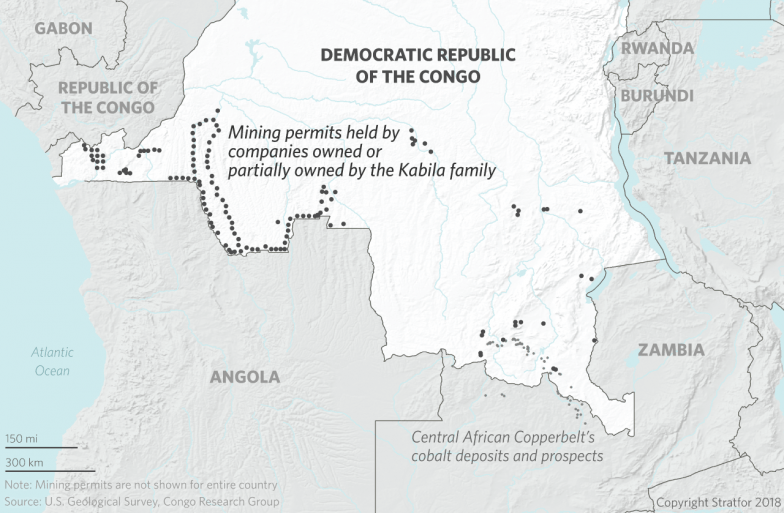 The president and his family are heavily involved in the mining sector through various companies and holdings. In addition to investment in diamond mines, they have turned their attention to copper and cobalt in recent years. Kabila’s brother, Zoe, owns or controls stakes in several companies that possess mining permits or perform services for Western mining companies, including Canadian-based Ivanhoe Mines.

Ivanhoe has obtained exploration permits with La Generale Industrielle et Commerciale au Congo, a subsidiary of Cosha Investment in which Zoe Kabila possesses a 90 percent stake, according to Congo Research Group. Another subsidiary owned by the president’s brother also provides services for China’s Sincomines as part of a $6.2 billion minerals-for-infrastructure project that centers on copper and cobalt. China has a vested interest in the country thanks to its ambitious electric vehicle initiative and achievements in battery manufacturing. China is also a key consumer of the output from smaller, often unregulated mining operations that often sell for much lower prices but which have been the subject of human rights investigations. Glencore has also found itself mired in some controversy, and it is currently determining its contractual obligations on permits obtained from Israeli investor Dan Gertler, who was subject to sanctions for corruption and involvement in human rights abuses.

The Kabilas have amassed ample wealth, but international pressure for Joseph Kabila’s resignation is increasing, especially as his constitutional term limits ended in December 2016. With no obvious successor, the plan for transition — if there is any — remains unclear. The president has successfully used the country’s mineral wealth to support himself and his close circle. Raising mining royalties by formally approving the recent legislation would allow the government to further benefit from the mining sector, although it would also incur the wrath of international mining companies. Alternatively, Kabila may be using the levy as a bargaining chip to provide the government with some much-needed breathing room with the international community. There are indications that he may be discussing some sort of deal with mining companies, as Ivanhoe has “specific assurance” of consultations on the mining code with Kinshasa, Bloomberg’s Tom Wilson reported Feb. 26. However, more recent statements from the government indicate that while conversations with mining companies are continuing, the president could sign the legislation imminently.

Kinshasa rules over a country awash in mineral resources, although the Congolese government has largely given mining companies a long leash to pursue production. Now, the president (and whatever government may follow) stands poised to insert his administration more forcefully into the industry in the country. Kabila’s delay in concrete action reflects his conundrum: sign the bill into law and accrue greater revenue — irking foreign mining companies and the international community in the process — or continue discussions in an attempt to appease global companies to prevent an acceleration of the mining industry’s move away from the Democratic Republic of the Congo to places such as Australia and Canada in the search for more cobalt. But whether the Congolese government and mining companies embark on a path of conflict or cooperation, reckoning with the country’s political uncertainty looks set to become a cost of doing business for the global mining sector more than ever before.