Tiny Bahrain is the financial black sheep of the Arab Gulf monarchies. Unlike its neighbors, Bahrain has low oil-and-natural-gas production and cannot bankroll a large social contract as nearby countries do. This has left it in a financially precarious position and reliant on support from Saudi Arabia. But a new oil and gas discovery could give it financial independence.

The news could be game-changing for Bahrain, a country with high debt and relatively low oil production compared with its neighbors. Though the tiny island kingdom will be quick to use the announcement to drum up financial support and investor interest, any big changes to its economy will come slowly. It will need at least the next five years to reach the oil production levels it aspires to, and only a fraction of the headline amounts released by al-Khalifa will be eventually extracted, because those numbers were not the figures for recoverable reserves. In the meantime, Bahrain will remain dependent on fellow Gulf Cooperation Council (GCC) members, namely Saudi Arabia, for financial and security support.

Striking It Rich, Sort Of

The figures for the new Khaleej Al Bahrain field dwarf Bahrain’s current oil and gas reserve numbers, which sit at 125 million barrels of oil and 92 billion cubic meters of gas. The country hopes that it can eventually produce about 200,000 barrels per day (bpd) from the field — a major increase considering that Bahrain currently produces just 45,000 bpd from its other field (though it receives an additional 150,000 bpd from the Abu Safah field it shares with Saudi Arabia). 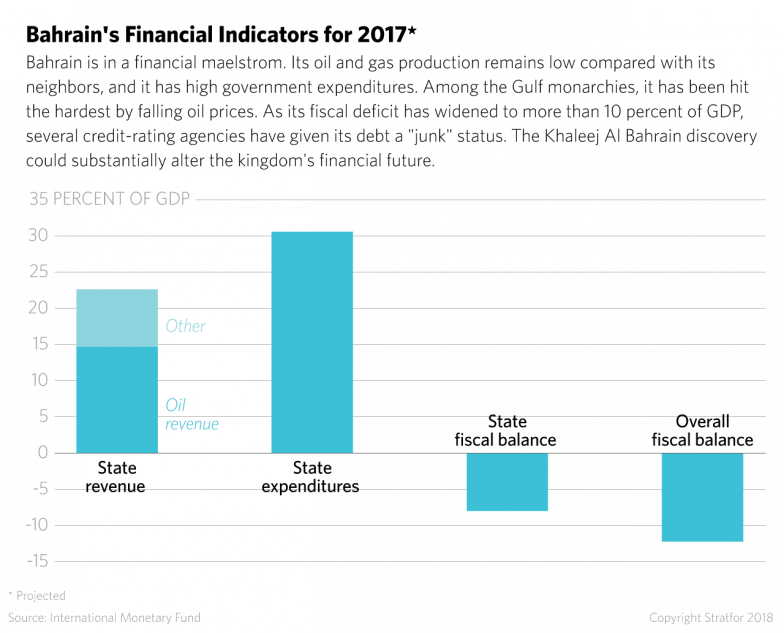 However, any talk of Bahrain’s oil riches matching those of other small Gulf monarchies such as Kuwait, Qatar and the United Arab Emirates is premature. Right now, the oil-and-gas figures have a P50 rating, meaning there is a 50 percent likelihood that the estimated amounts are correct. It’s not clear how much of the hydrocarbons will actually be recoverable; the touted figures are “in place” resources, and they are in rock formations known as “tight oil” and “tight gas,” meaning they have low permeability (similar to U.S. shale formations), which hinders the flow of hydrocarbons. Extracting the oil and gas in the new field will require expensive techniques, and Bahrain will still not be able to withdraw a large majority of it.

In his announcement, al-Khalifa did not set out a budget or road map for the long-term development of the Khaleej Al Bahrain field. He did say that Bahrain was already exploring the possibility of signing long-term contracts with international oil companies and that the country would like to finalize agreements within five years. So, while the field’s discovery may be significant, it won’t be able to solve Bahrain’s financial and economic challenges overnight — or even within the next few years.

Charting a Course For the Future

If the initial estimates do prove accurate and Bahrain can increase its own oil production fourfold, the windfall may alleviate many of the country’s financial problems, including its high debt. Despite low oil production and the government’s diversified economy, roughly 60 to 70 percent of Bahrain’s state revenue comes from oil and gas sales. And when oil prices collapsed in 2014, the country’s fiscal deficit went from about 2 percent of its gross domestic product (GDP) to 13 percent. Today, the Bahraini government’s debt is almost as high as its GDP, earning the country a “junk” status by several major credit-rating agencies. A discovery as major as the Khaleej Al Bahrain field will be a valuable asset as the country tries to regain investor confidence.

Additionally, Bahrainis, like many of their counterparts in the Gulf states, have long enjoyed hefty government subsidies on utilities such as water, electricity and fuel, as well as benefits related to homebuying and health insurance. Those allowances are an important part of the country’s social contract between the government and its citizens, and in part they help quell Shiite unrest against the Sunni al-Khalifa royal family. But over the past few years, especially after the 2014 oil price dive, Bahrain has tried to trim subsidies and raise taxes in an effort to increase government revenue. Any new oil revenue could help bring back the benefits that Bahrainis expect and keep dissent under control.

But given the challenges it faces, Bahrain won’t see a major economic boost until the mid-to-late 2020s. Until then, the country will continue relying on its GCC neighbors, particularly Saudi Arabia, for financial and security support. Bahrain’s and Saudi Arabia’s royal families share a close political relationship, and Saudi Arabia has been the leading supporter of a 2011 “Gulf fund,” which was designed to help shore up Bahrain’s and Oman’s economies (though its contributions to the fund have dwindled recently). Once it is generating new sources of revenue, Bahrain could become less dependent financially on Saudi Arabia. But for now, the country will remain under harsh financial constraints, relying on GCC support as the government attempts to use long-term promises to boost domestic investment in the present.