Cornflakes and milk may or may not be getting more expensive, but some higher-profile things are rocking like it’s 1979. Houses, for example:

(CNBC) – Homebuyers, hold onto your wallets. The gains in home prices are getting bigger as the supply of homes for sale gets leaner.

The median price of a home sold in March surged 8.9 percent compared with March 2017, according to Redfin, a real estate brokerage. It is the biggest annual increase in four years. Redfin tracks prices in 174 local markets and calculated the median home price at $297,000.

High prices are the result of very, very low inventory. The supply of homes for sale was down 11.9 percent in March, compared with a year ago. As a result, sales fell 3.7 percent. The number of new listings in March dropped 5.6 percent annually, although part of that may have been due to the Easter holiday falling early this year.

“Sellers are slow to list this year and we aren’t seeing enough new construction homes to fill the gap,” said Redfin’s chief economist, Nela Richardson. “If we don’t see the new listings number turn around next month or a pickup in new housing starts, inventory will be a persistent drag on sales for the remainder of the year.”

Buyer demand is still strong, despite higher prices. Sellers are pulling back, however, likely worried they won’t be able to find anything else they like or can afford. The average home went under contract in 43 days in March, more than a week faster compared with a year ago and a March record. Nearly a quarter of the homes sold for more than their list prices.

Large metropolitan markets in California, as well as Seattle and Denver, continue to see big price gains, but some unexpected markets are also seeing inflation, as well. Markets like Allentown, Pennsylvania (21.8 percent), Detroit (20.6 percent) and Las Vegas (16.5 percent) are not far behind.

The supply situation is acute in Washington, D.C., where inventory fell 22 percent in March annually, according to Long & Foster Real Estate. It would take just 1.8 months at the current sales pace to exhaust the supply. A balanced market supply is considered to be about six months.

Another reason for low inventory might be that people who move run the numbers and discover that it’s profitable to hang on to their first house and rent it out. Combine their low-rate mortgage and high current rental rates and that’s the best-cash flow generator they have access to.

And now consider the cost of commuting:

(CNBC) – Demand for gasoline hit a record level at 9.86 million barrels a day last week, according to government data. Prices at the pump are expected to top $3 a gallon for unleaded gasoline in many parts of the country in the next few weeks, as summer driving season approaches.

“Right now we have nine states above $3. I think we might see about half of the states get to $3,” said Tom Kloza, global energy analyst at Oil Price Information Service. “The region that will see the biggest increase soon is the northeast because we’re switching to summer gas.”

For a national average price, “I think probably it’s a better than 50/50 chance that the U.S. surpasses $2.80 as an average,” Kloza said.

The national average for unleaded gasoline was $2.73 per gallon Wednesday, up a penny from Tuesday but seven cents higher than last week, according to AAA. Gasoline prices have been moving up steadily with the price of oil, and are now up 33 cents from last year’s levels and almost 20 cents from just a month ago, according to AAA data.

Kloza notes the previous high for demand was just over 9.8 million barrels per day last summer, noting there has never been a number that high before Memorial Day.

Spiking home prices are a mixed bag, with current homeowners benefitting at the expense of wannabe homeowners. But spiking oil and gas are bad for almost everyone. US automakers depend on sales of monster trucks and SUVs, which will be far less attractive in a $3 gas world. And anyone who commutes gets, in effect, a tax increase.

Meanwhile, both houses and gas feed the Fed’s desire to “normalize” interest rates at considerably higher levels, a process already well under way. Here’s the 10-year Treasury yield so far in 2018. Note the spike in just the past couple of days. 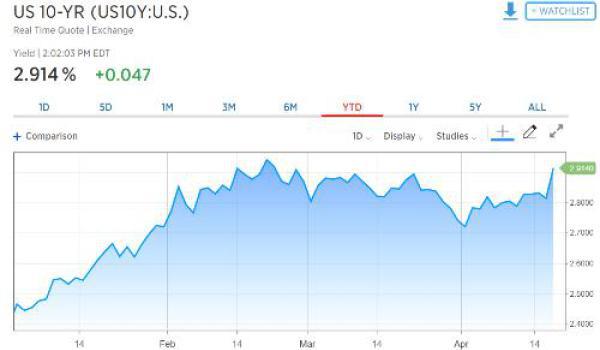 There’s a number on the 10-year that will destabilize the financial system, but no one knows what it is. If it’s 5% we have some breathing room. If it’s 3%, not so much.