We are now well into the year when I said stocks would plunge in January and would prove to be a gaping “crack” in the economy by summer, and look at how seriously the market has fallen apart since it started to drop in the last week of January:

It was just three months ago that stock-market investors were being swept up by a euphoria pinned to the idea of economic expansion taking hold harmoniously across the globe—a dynamic that hadn’t occurred since the 1980s, and one that was expected to extend into 2018.

However, less than midway through the year and some market participants are already spotting cracks in the notion of so-called synchronized global growth, with some fearing that a whiff of stagflation is starting to permeate. Stagflation is typically described as persistently high inflation and high unemployment, combined with weak economic demand….

“The problem is that there have been macro forces that have been clouding the outlook, so it’s preventing the investor from taking the good earnings news and running with it,” Young told MarketWatch….

Economic growth in the U.S. has tapered a tad, with the first-quarter gross domestic product, the official scorecard for the economy, coming in at the slowest pace in a year owing to a big pullback in consumer spending. (MarketWatch)

Dow down relentlessly in spite of good news

Even though corporate earnings reports posted lots of good news last week and this, the market fell again and again along the relentless downward trend line I noted in last week’s article: 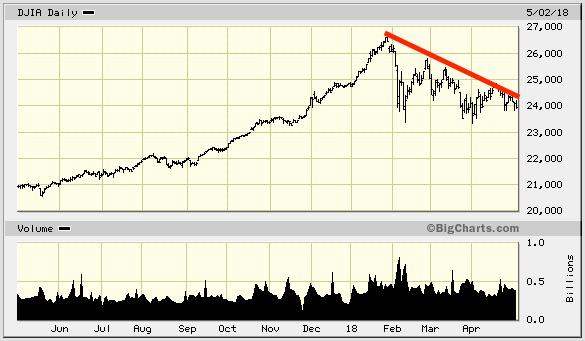 It’s not hard to see that each bounce up has become weaker than the bounce before. What happens when the collapsing ceiling and the floor meet? If the market breaks through that floor, typically the floor collapses. From there, it now has a long way to fall without any obvious support. In my view, its a fall that eventually leads back to the bottom of the Great Recession and maybe even further. 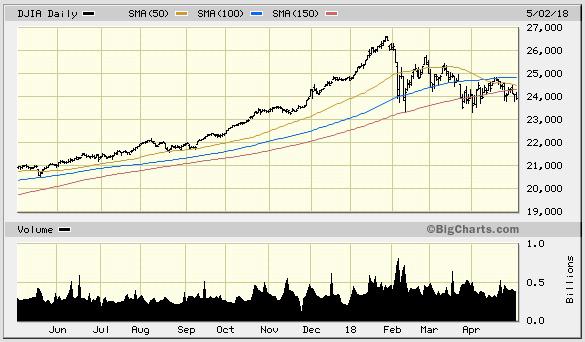 There is not much floor left. What used to be support beneath the market has become the ceiling. The market has inverted, and is now sitting right on its 200-day moving average (often regarded as the ultimate floor): 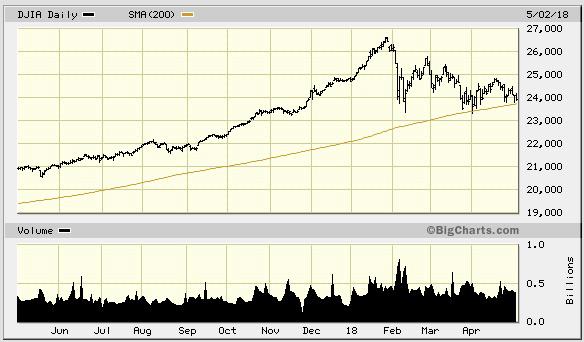 2018 Dow settling on its last line of support, the 200-day moving average.

The 200-day SMA … is commonly used in stock trading to determine the general market trend. As long as a stock’s price remains above the 200 SMA on the daily time frame, the stock is generally considered to be in an overall uptrend…. It is possible there is also something of a self-fulfilling prophecy aspect to the 200 SMA; markets react strongly in relation to it partially just because so many traders and analysts attach so much importance to it. (Investopedia)

When stocks fall below their 200-day trend, the market is generally considered to have made a change in trend. While I have not based any of my predictions on charts, this chart reinforces what I’ve said would happen this year because many investors do put emphasis on charts, and breaking through the 200-day average on the way down with no clear support below is a frightening sign to many investors … to which they may respond as frightened people often do … in a panic. So, we are now perfectly poised to see where this market is going from this point forward.

Standard and Poors 500 doing poorly, too

It has become common now to read that the closest economic comparison to our own time is found in the Great Recession, and this retreat to Great Recession milestones in the US stock market is happening just as the market enters what has typically been the weak half of the year for stocks (May – Oct.). That doesn’t give a lot of hope that things are going to return to any upward trend, especially when stocks keep dropping in the face of generally positive-sounding corporate reports.

This is by far the worst sign for the market.

So far the Trump Tax Plan has failed to deliver the positive economic results intended, even though its tax benefits are being captured. The market continues falling because almost none of the tax savings are going to wages, as was promised, or capital improvements. (Other than those one-time token $1,000 bonuses. Those were all window dressing intended to help sell America on the benefits of the tax cuts that were just passed, but more on that at another time.).

Those tax cuts have poured almost entirely into a massive expansion of already voluminous stock buybacks. Those make shareholders richer, but no one else. At least, they have made the rich richer … until now when they’re making no one richer. As noted in my last article, the stunning revelation here should be that the hyuuge increase in stock buybacks this year — the biggest ever — hasn’t been able to shore up falling stock prices.

For over a year now, I’ve said that buybacks would reach their extreme this year and would prove by summer to finally be ineffective against the enormous downdraft coming from other macro-economic factors — namely the Fed — that begin pressing down on stocks. No corporation exemplified this in action more than Apple (long a leading stock) did this week when its now mammoth buybacks and positive earnings reports failed to lift the market (or, for that matter, even Apple) from its declining path.

Apple spent a record $22.8 billion in stock buybacks during the first quarter of 2018. (That’s not just an Apple record but a historic record for any corporation!) To give that some perspective, that’s a buyback greater than the aggregate value of more than half of the companies in the S&P 500! Apple also gave out over $3 billion in dividends — not something Apple ever does. It did this by repatriating in its foreign profits, which it had banked in bonds. 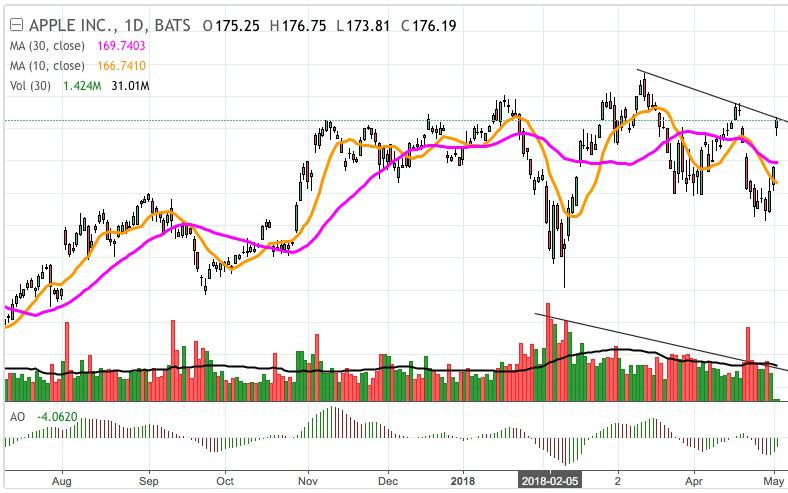 Apple stock on slight downtrend for 2018.

Not too exciting for a former social climber who is really trying to put out for everyone. Not much bang for the buck there! No wonder Apple has decided and just announced that it needs to do another $100 billion in stock buybacks! That’s simply what it knows it will take to get its stock riding upward again! Apple — just to get its stock higher again — now has to mainline almost half of its $250 billion cash hoard. Not a cheap crack whore here. This is the madame of the marketplace failing to put out for all her stock delivery boys!

The Great One’s tax plan continues to fail to deliver in every way except, as I’ve said it would, because all the gains are being pocketed by the wealthy few at the top in the form of stock buybacks and dividends, and those have run out of effectiveness, as I also said they would. That is a particularly dark turn in a market that had long trended upward due to buybacks.

Bondage is the new game in town

And let’s not even talk about what all that repatriation of Apple money banked in bonds will do as Apple now sells all those bonds in a market already flooded by treasury bonds because the Fed is unwinding its bond holdings, which pushes the US government to refinance those bonds without the Fed as its automatic buyer at the same time that it is issuing new bonds for rapidly expanding deficits! Then multiply that by other corporations doing the same thing with their foreign holdings in bonds, which they will be repatriating. (You can read more detail on that huge problem at ZeroHedge.)

The US government just set a quarterly record by borrowing a net $488 billion while the Treasury this week signaled further increases in its rate of borrowing, but Trump’s Treasury secretary says he is not concerned:

“By definition, supply and demand will equate,” Mnuchin said on Bloomberg when asked if he was concerned.

Of course they will. They always do (“by definition”). But at what price?