Skip to content
HomeThe EU and the Unanimity Trap

In its 2018 Annual Forecast, Stratfor said that this would be a year of intense debate about the future of the European Union. Member states currently are discussing a long list of proposals for economic, financial, defense and institutional reform. The decision is ultimately in the hands of the member states, and the voting mechanism used for making those decisions is expected to influence the outcomes.

During the early stages of European integration, most decisions were made by unanimous consent, but successive treaty reforms expanded the use of majority voting. Replacing unanimity with majority rule is a sign of integration, meaning countries are willing to accept even the policies they oppose. Naturally, this evolution was accompanied by several mechanisms to reassure the member states, and principles such as a “qualified majority” (which involves 55 percent of the member states representing 65 percent of the bloc’s population) or a “blocking minority” (which gives a certain number of countries the possibility of blocking a legislative proposal) were also created.

These days, the European Union requires unanimity only in specific situations described in the treaties. They include the incorporation of new member states, the approval of EU treaties, the harmonization of national tax legislation and the approval of the EU multi-annual budget, as well as decisions related to foreign and security policies. While the list is shorter than it used to be, the areas covered by unanimity voting are important. This requirement often complicates the decision-making at the EU level, and it opens the door for intense negotiations where a significant amount of horse-trading takes place, because governments often threaten to use their veto power to obtain concessions. EU members can change the bloc’s voting mechanisms without having to renegotiate the treaties, but this change requires unanimity, which makes this option difficult, if not impossible, to use. 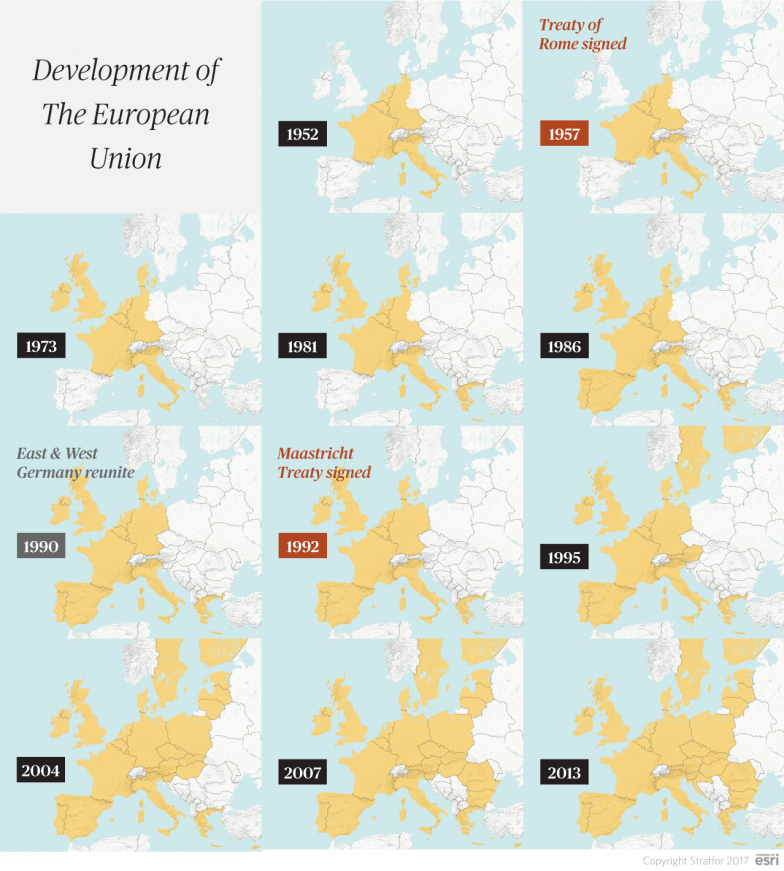 No New Members or Treaty Change

Considering the current political and social environment in the European Union, unanimity voting will influence the bloc’s policymaking on several issues. The first is the incorporation of new member states. The European Union is holding accession talks with countries in the Western Balkans such as Serbia and Albania. The European Commission said it wants most of these countries to join the bloc by 2025, but the goal is too ambitious. To begin with, these countries still have to introduce significant economic, institutional and political reforms before they can qualify for EU membership. And even after they enact the required reforms, several EU countries could use the veto power that unanimity voting gives them to block their membership. For example, pressure from domestic nationalist groups probably would prompt governments in Northern Europe to oppose the accession of new members, while many EU countries in the Balkans, such as Greece, Croatia and Bulgaria, have unsolved territorial and political disputes with the candidate nations.

Another area where the European Union probably will not see progress for at least another decade is treaty change. Most governments are against reforming the Lisbon Treaty, the newest EU treaty, which took force in 2009. Some are against reforms that could deepen federalization in Europe, while others fear the opposite: that for the first time in EU history treaty change could be used to reverse some aspects of continental integration instead of deepening them. Over the past decade and a half, the bloc has become so diverse, and the frictions between Northern Europe and Southern Europe, and between Eastern Europe and Western Europe, have become so deep, that most leaders believe treaty change would be a risky endeavor.

Foreign policy is another area where unanimity is required. Decisions such as imposing sanctions on non-EU countries or authorizing military operations abroad have to be approved by all the member states. As a result, the process is often slow and is subject to long debates where countries threaten to use their veto power, and policy decisions are watered down. The Lisbon Treaty included some new elements meant to make EU foreign policy more coherent, such as creating the position of high representative for foreign affairs, but the principle of unanimity remained sacrosanct.

In late February, Germany’s defense minister, Ursula von der Leyen, said the European Union was studying ways to make foreign policy decisions by majority vote. According to von der Leyen, this change would make the bloc more effective and allow it to react to crises more rapidly. However

, such a change would have to be approved by unanimity, which would be hard to achieve. By accepting to replace unanimity with a majority voting, EU countries would be accepting to subordinate their national foreign policies to that of the European Union, a change many states are likely to oppose. After all, the European Union is a club of states, whose national interests and foreign policy strategies are not always aligned. Since the United Kingdom’s Brexit referendum, the European Union has shown renewed interest in deeper defense, security and foreign policy coordination within the Continent, which means that there is room for cooperation in these areas. However, progress will be slow and modest.

Trade is another important aspect of EU foreign policy, but here things are more complex. The European Commission has the power to negotiate free trade agreements on behalf of the member states, but the final decision is in the hands of the individual governments. EU free trade agreements are approved by qualified majority, though unanimity is required in cases that include trade in services; direct foreign investments; audiovisual and cultural services; social, educational and health services; and intellectual property. In some cases, even the national and regional parliaments of the member states have to be consulted, and those discussions further complicate the process.

While decisions such as accepting new member states, writing a new treaty or making foreign policy more effective can be postponed indefinitely, there are other areas where unanimity is required and a decision point is approaching fast. The most important is the next multi-annual budget, which has to take force in 2021. This will be the first budget without the United Kingdom’s contributions (10 billion to 15 billion euros a year), and EU governments will have to make some difficult choices. First, they will have to decide the size of the budget and whether they want to ask member states for bigger contributions or to create new sources of revenue. Second, they will have to determine spending priorities, including the future of sensitive policies such as agricultural subsidies and cohesion funds. Finally, they will have to decide what conditions to attach to the disbursement of funds.

These are all controversial. The European Union’s net contributors, most of which are in Northern Europe, oppose increasing national contributions to the budget. At the same time, countries such as Germany and France want to link the disbursement of agricultural and cohesion funds to respecting the rule of law, which is a veiled threat against countries such as Poland and Hungary. Finally, the European Commission wants additional sources of revenue, in the form of new taxes or other ways to collect money directly. The commission will present a draft budget on May 2. While there will be a compromise eventually and a budget will be approved, the negotiations will take months, and the final version will probably be considerably different from the commission’s initial proposal.

Despite the limits created by the use of unanimity in key policy areas, EU countries and institutions still have tools at their disposal to deepen their integration. For example, they can sign intergovernmental agreements that allow them to do things without reforming the treaties. In 2012, for example, most EU members signed the fiscal compact treaty, which established tighter fiscal targets for its signatories. In a similar fashion, the European Stability Mechanism, the eurozone’s permanent bailout fund, was also created in 2012 through an intergovernmental agreement.

“Enhanced cooperation” is another tool that allows some member states to deepen their integration even if others decide not to participate. This mechanism requires the participation of at least nine members, and their cooperation cannot contradict EU treaties. It has been used to create the European Public Prosecutor’s Office and to introduce a unitary European patent, for example. But other proposals, such as the creation of a financial transaction tax, have proved so divisive that even enhanced cooperation failed to make progress.

In the coming years, enhanced cooperation and intergovernmental agreements could be used to make more decisions where unanimity cannot be achieved. One such opportunity could arrive soon. The European Commission’s proposal to change the way tech companies are taxed is generating frictions within the European Union, because countries such as Ireland, Luxembourg and the Netherlands oppose it. Since unanimity is required to approve the new tax, France and others have suggested that a smaller group of countries could move ahead with the plan in case of resistance from some member states. This would, however, be only a second-best option that would somewhat reduce the effectiveness of the new tax.

Enhanced cooperation and intergovernmental agreements could help the European Union bypass some of its institutional constraints, but they could also consolidate the idea of a “multiple-speed Europe” in which member states have different levels of political and economic integration. While these tools will offer some members the chance to move ahead with the process of Continental integration, they could also deepen the divisions within the bloc. The more the European Union makes decisions that affect only some of its members, the greater it risks becoming less cohesive and weakening the social, political and economic ties among its countries.