By Fergal O’Brien – Re-Blogged From http://www.Silver-Phoenix500.com

U.K. home prices plunged the most in almost eight years in April, adding to signs of weakness in Britain’s property market. 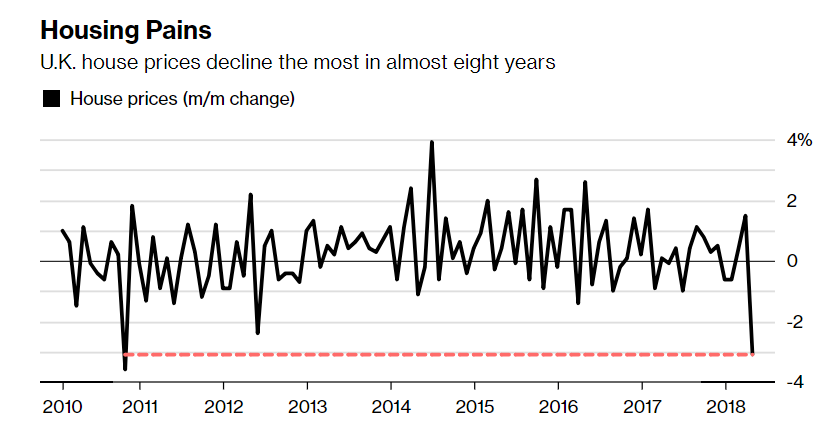 Values dropped 3.1 percent from March to an average 220,962 pounds ($299,140), mortgage lender Halifax said in a report Tuesday. That’s the biggest drop since September 2010. While that figure can be volatile, the quarterly measure also showed a decline. It fell 0.1 percent, a third straight drop.

Britain’s housing market has been cooling for the past two years, with London seeing the sharpest slowdown. Monthly mortgage approvals have slipped and reports point to waning interest from potential buyers.

“Housing demand has softened in the early months of 2018, with both mortgage approvals and completed home sales edging down,” said Russell Galley at Halifax.

He expects prices will be supported by a low level of housing supply, though they will rise no more than 3 percent this year.

Editor’s Note: The London property bubble and the bubble in certain other UK property markets is now bursting. Prices are falling and the question now becomes how far will they fall and will this be a relatively mild correction, a sharp correction or indeed another property crash.

Our money is on the latter given the massive over valuation in the London property market in particular, the fragile nature of the massively indebted UK economy and the many geo-political risks looming over the UK including Brexit.

UK investors would be prudent to take heed of the many warning signs now and take the necessary action. These include reducing exposure to property and other risk assets in the UK.

Prudent diversification and not having most or all your investment eggs in ‘UK Plc’ baskets remains the key. Having an allocation to physical gold (allocated and segregated) to hedge the growing UK and international risks will again protect property and other investors as it did during the last property crash and financial crisis.