A while back, a writer (whose name and story details I unfortunately don’t remember) was researching the credit card business and tried to figure out how card issuers decide which customers to pursue. To this end he created a series of fake personas ranging from an affluent straight-arrow who always pays her bills on time to a white-trashy guy with impulse control issues and a history of multiple defaults and late payments.

The findings? Impulse-control-issues guy was deluged with card solicitations while straight arrow’s mailbox was relatively empty. Credit card companies, it turned out, make most of their money by extending credit to people who will be frequently late (thus generating massive late fees) and who are likely, when they do make a payment, to choose the minimum and let their balances accrue at double-digit interest rates. Customers who pay off their modest monthly balance are relatively unprofitable for the card companies and are therefore not as attractive.

Why bring this up, other than because it’s always fun to pick on such obvious villains? Because two uber-villains are now eyeing the business:

Two of the biggest U.S. banks, Goldman Sachs Group Inc.and Wells Fargo & Co., are on the brink of piling into credit-card lending, seeking a share of the $183 billion in fees and interest tied to the product.

Goldman Sachs is weighing the move as part of a push into consumer finance with its Marcus online lender, Chief Financial Officer Marty Chavez said during a conference call with analysts last month. Wells Fargo plans to resume targeting U.S. non-customers with mailed credit-card offers later this year and began accepting new applicants from outside affiliates in 2016.

The firms have pressing reasons to jump into card lending. Goldman is looking for a business that promises attractive returns even if the bank doesn’t win a large share, Chavez said. And for Wells Fargo, entering a market rich with fees is even more important after a Federal Reserve order crimped its business plans amid customer abuses in retail banking.

The lure is clear. The fees and interest U.S. banks collected from their card businesses jumped 12 percent in 2017 from a year earlier, according to estimates from payments consultancy R.K. Hammer. The average household that maintains a balance in credit-card debt pays $904 in interest a year, a study by Nerdwallet shows. 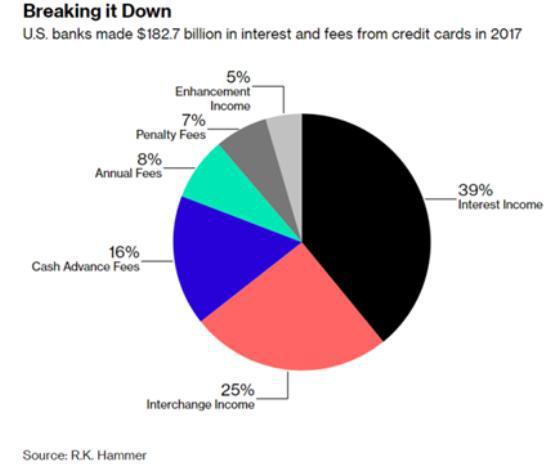 Let’s take a quick look at these income streams. “Interchange income” is what card companies charge merchants for transactions. This is a legitimate fee that merchants don’t like but accept as the price of convenience.

Interest income is the loan-shark level rates cards charge their customers who carry a balance. According to Bankrate.com, the average rate is currently 16.9%. Anyone who pays this kind of interest on a loan in today’s artificially-low-rate world is clearly disabled in some fundamental way and should not be preyed upon by lenders. But in the world of credit cards they’re celebrated as ideal customers.

Late fees go hand-in-hand with exorbitant interest rates. If a customer/victim is desperate enough to pay 17% interest they’re probably going to miss the occasional payment, allowing the card companies to tack an extra $30 or so dollars onto the ever-expanding balance.

As for cash advance fees, here’s an explanation from financial site TheBalance:

Your credit card issuer isn’t really doing you any favors by letting you take out a cash advance, which can be done via ATM or through convenience checks your card issuer sends in the mail.

They’ll make money off the transaction, by charging a cash advance fee each time you take out a cash advance against your credit limit. That’s on top of interest charged starting from the day you make the cash advance.

The readership of this blog skews older, wiser, and more affluent, so let’s have a show of hands: How many of you pay frequent late fees on your cards? Virtually none? Good for you.

How many of you carry a balance and pay double-digit interest? Virtually none again? Excellent.

How many of you pay an annual fee on your card? Some of you? Understandable because card issuers make fee-charging cards sound like status symbols, but in reality they do virtually nothing that a no-fee card can do. So cancel that high-fee card and replace it with one that lets you buy stuff and accepts full payment at the end of the month – which is to say any standard-issue Visa or Mastercard.

Now, if you’re not feeding the credit monster, where are all these billions in interest and fee income coming from? Obviously from the poor bastards who can’t manage credit and because of that are specifically targeted by these loan sharks with stock tickers. Now that Goldman and Wells Fargo are jumping in, look for mail carriers with trailer parks on their routes to have sore backs in 2019.

The only happy part of this story is the timing. This late in the cycle, an expansion into subprime consumer lending (which is what credit cards are as currently marketed) is virtually guaranteed to blow up in card issuers’ faces.