The price of oil is rising, which is obviously good news for those who sell it to the rest of us. Russia in particular seems to be enjoying the current trend, so much so that — if I’m understanding this correctly – Moscow is now receiving more in taxes than it’s spending. This is producing something called a “budget surplus,” which is a kind of currency war weapon that can be deployed to improve a country’s geopolitical position. Here’s a quick overview:

(Oil Price) – Due to the oil price rally, Russia expects its oil and gas revenues to jump fivefold compared to the expected revenues set in its 2018 budget, according to the Finance Ministry that now expects Russia to post a budget surplus for the first time since 2011.

Oil and gas exports account for around 40 percent of Russia’s federal budget revenues.

Russia’s revenues from oil and gas sales are now expected at US$44.4 billion (2.74 trillion Russian rubles) for 2018, up from US$8.5 billion (527.6 billion rubles), according to a budget amendment by the Finance Ministry.

Due to the unexpectedly high oil prices, Russia is currently on track to book a first budget surplus since 2011, at 0.45 percent of gross domestic product (GDP), compared to previous expectations for a 1.3 percent of GDP deficit. The previous forecasts, however, were based on assumptions that the Urals crude blend would average around $40 a barrel. Between January and April, the price of Urals has averaged $66.15.

The additional oil revenues that Russia has earned above the Urals price assumption of $40 a barrel will be allocated to reserves instead of to spending, TASS news agency reports.

Analysts commented on the proposed budget amendment that Russia will have more revenues while it continues to plan for expenditures close to the original budget law.

“This will provide a very useful cushion to lean on if there are some adverse macro or geopolitical shocks,” Ivan Tchakarov, chief economist at Citi in Moscow, told Reuters.

One way that Russia is likely to use this exotic new weapon is to buy gold. The Russian central bank is already one of the biggest buyers of the metal, increasing its reserves by nearly 500 tons in less than three years – while, remember, it was running budget deficits. 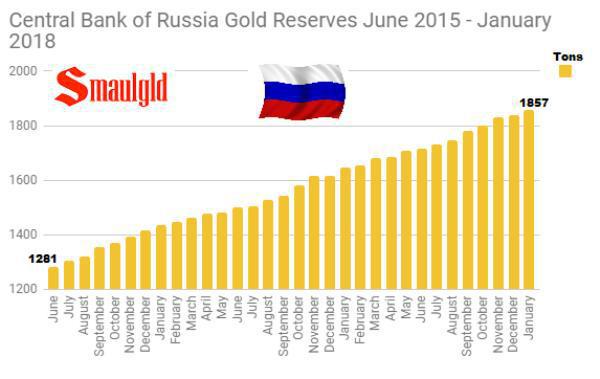 Now, with a surplus to deploy, it’s reasonable to assume that the aggressive gold buying will at least continue and very possibly accelerate. The result: An increasingly gold-backed currency in a world of un-backed fiat, something that’s more of a threat to US financial hegemony than most of the hardware in the Kremlin’s military arsenal. For more on how this might play out, see Putin: Russia Needs to Get Rid of ‘Dollar Burden’ in Oil Trade. A few relevant quotes:

A few days ago, President Vladimir Putin was quoted as saying that Russia was mulling over ways to ‘get free’ of the U.S. dollar burden in oil trade as part of a plan to boost its national economic sovereignty…Oil is traded in dollars on the exchange, TASS news agency quoted Putin as saying. “Certainly, we are thinking about what we need to do in order to get free of this burden.”