Skip to content
HomeRamadan in 2018, a Threat Lens Perspective

Editor’s Note:  This security-focused assessment is one of many such analyses found at Stratfor Threat Lens, a unique protective intelligence product designed with corporate security leaders in mind. Threat Lens enables industry professionals and organizations to anticipate, identify, measure and mitigate emerging threats to people, assets, and intellectual property the world over. Threat Lens is the only unified solution that analyzes and forecasts security risk from a holistic perspective, bringing all the most relevant global insights into a single, interactive threat dashboard.

Ramadan, the ninth and holiest month of the Islamic year, is expected to take place between May 15 and June 14 this year, give or take a day. The Islamic calendar is based on lunar cycles, and Ramadan officially begins with the first sighting of the crescent moon. A number of variables, including regional practices, scholarly disagreements and cloud conditions, mean that the start of Ramadan is neither uniform around the world nor perfectly aligned with the Gregorian calendar.

During the month, observant Muslims fast from sunrise to sunset, followed by evening feasting. While most practicing Muslims around the world will use the time to attend mosque more frequently and be with family, the religious fervor of the month will incite a select few to engage in acts of violence in the name of Islam. Jihadists see Ramadan as an especially auspicious time for attacks, believing that actions taken during Ramadan are somehow nobler, and despite prohibitions on aggression of any kind during the month. The Islamic State, al Qaeda and other jihadist groups have all sought to foment attacks during Ramadan with promises of greater rewards in the afterlife. 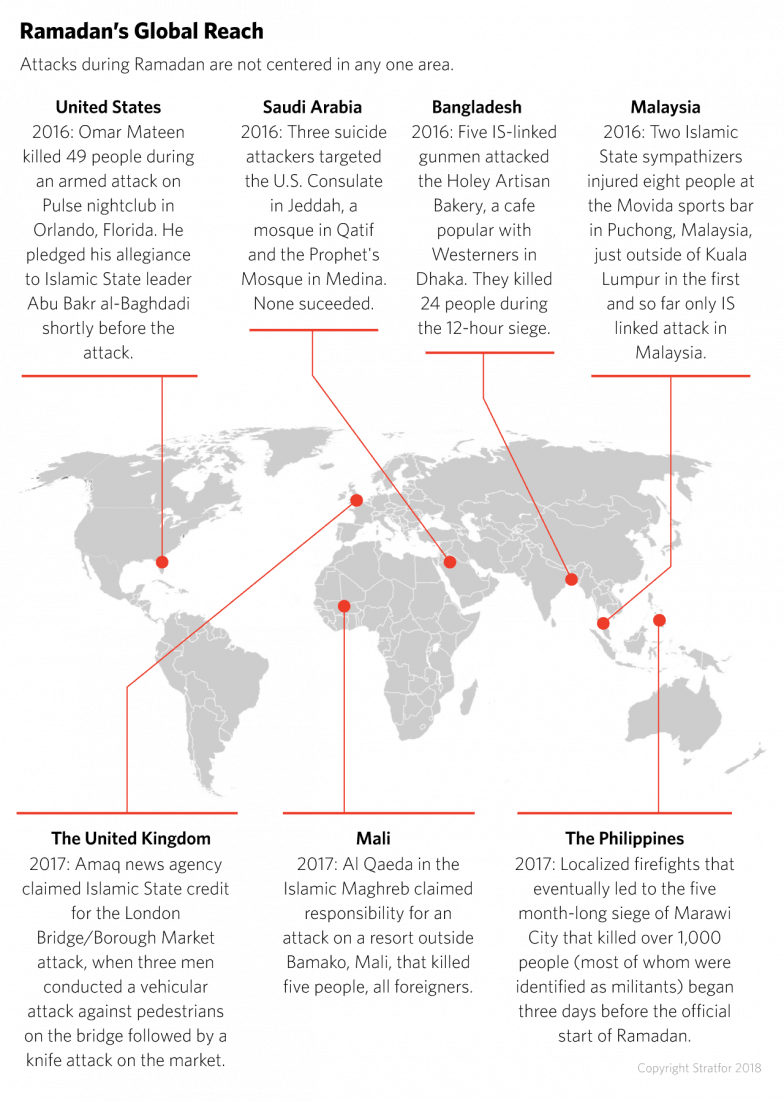 Heading into Ramadan 2018 (or 1439, according to the Islamic calendar) Threat Lens anticipates an increase in the tempo and intensity of attacks, a trend continuing from the previous two years. The following locations and regions will be especially susceptible to increased attacks during Ramadan this year:

Israel and the Palestinian Territories

A confluence of events including Ramadan will exacerbate the Israeli-Palestinian conflict this year. The United States opened its new embassy in Jerusalem May 14, which also happens to be the day Palestinians commemorate their 1948 displacement from Israel — referred to by them as the Nakba, Arabic for “Catastrophe.” Demonstrations along the border fence with Gaza turned violent, leaving thousands of Palestinian protesters wounded and dozens dead. Senior Hamas official Ismail Haniyeh threatened to launch a new intifada, warning of a “mother of all marches” to the perimeter fence dividing Gaza from Israel.

The day’s events were fueled by a mixture of political anger (the embassy move), national grieving (Nakba day) and spiritual intensity (Ramadan). As tensions increase over the coming week, the 2014 Gaza conflict, which claimed over 2,000 lives and saw thousands of projectiles fired into Israel from Gaza, provides a good baseline of just how bad things can get. One emerging trend likely to continue during Ramadan is the deployment of kites armed by Palestinians with incendiary devices designed to fly into Israel and start fires there. Such attacks have already caused $50,000 in damage, and more are certain to come.

The U.S. Embassy compound will likely be one of the safest places in Israel given the security assets dedicated to the event. But softer targets in Jerusalem and elsewhere in Israel will be vulnerable, especially those associated with Americans, whether diplomats or tourists. Hotels, restaurants and public areas will also be at heightened risk of attack.

Outside Israel and the Palestinian territories, Palestinian sympathizers will rally in opposition to the U.S. Embassy move, something seen in December 2017 following the initial announcement of the change. While the intensity of these protests will pale in comparison to protests in the Holy Land, U.S. and Israeli interests in Muslim-majority countries should remain on elevated alert during this time.

The start of Ramadan will also fall near the one-year anniversary of the beginning of the jihadist assault on Marawi City in the Philippines. While the risk that Islamic State supporters in Southeast Asia will seek to seize a new city any time soon is very low, the Bangsamoro Islamic Freedom Fighters — the most capable jihadist force currently in the southern Philippines — should be monitored. And while Marawi City residents just returning to their destroyed city have shown signs of frustration with the political process of clearing and rebuilding the city, those frustrations probably will not boil over — though signs of unrest should still be monitored during Ramadan.

Russia’s hosting of the World Cup will begin as Ramadan ends June 14. Though Russia has not seen a significant jihadist incident during Ramadan for the past two years, jihadist networks remain active there. The jihadist threat is hardly the most pressing security concern for the tournament. Even so, small-scale grassroots attacks and/or attempts against soft targets, such as public transportation infrastructure, are very possible.

Other parts of the world, of course, could see attacks during Ramadan. Attacks in the West would likely be unsophisticated, poorly planned attacks typically involving vehicles, blades or firearms. Inexperienced, grassroots jihadists might also attempt a drone-based attack outside of a war zone. We have continued to see jihadist interest in this platform in places like South Africa, and it is only a matter of time before we see such an attack — or, more likely, attempted attack. While such a plot is unlikely to prove tactically effective, it would capture substantial media attention.

While attacks against Westerners have tended to attract the most headlines, most jihadist violence has targeted Muslims. For example, Islamic State spokesman Abu al Hasan al-Muhajir called April 22 for attacks against “apostate” Sunnis who helped defeat the Islamic State: Libya, Egypt, Nigeria, Afghanistan, Pakistan, Iraq, and Syria. But while Iran saw a well-coordinated Ramadan attack in 2017, this was an outlier.

One thought on “Ramadan in 2018, a Threat Lens Perspective”