Skip to content
HomeIs Oil About To Become Front-Page News? “A Glut That Held Prices Down For Years Is Essentially Gone”

Here’s a new indicator for you: It seems that the difference between the price of oil here and abroad is a measure of tightness in the market, with a rising spread indicating higher prices in the future, with all the inflationary pressures that that implies. From today’s Wall Street Journal:

U.S. oil prices are lagging behind global oil prices climbing toward $80 a barrel, the latest sign of a market that has gone from glutted to exceptionally tight in the past year.

U.S. oil futures are trailing Brent, the global benchmark, by more than $7 a barrel, settling at $71.28 a barrel on Friday. The two oil benchmarks are further apart than they have been since 2015, before U.S. crude could be freely exported.

The divergence is a sign of how stretched global oil supplies have become even as U.S. output has marched higher, overtaking Saudi Arabia and rivaling Russia. That has contributed to soaring U.S. exports, which have hit a record of nearly 2.6 million barrels a day as users clamor.

“The market is screaming right now, ‘We need every barrel we can get,’ ” said Phil Flynn, an analyst at the Price Futures Group.

Both benchmarks have been on a tear lately. The Organization of the Petroleum Exporting Countries and its allies have been holding oil off the market for more than a year, and demand has surged as the global economy roared to life. Unexpected disruptions, like plunging oil output from Venezuela, have tightened supplies even further. A glut of oil that held prices down for years is essentially gone. 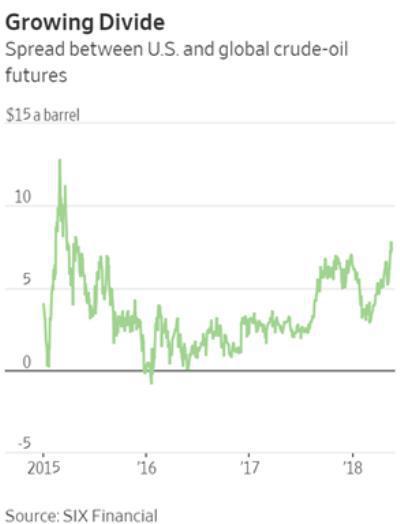 Higher oil prices are starting to boost inflation and some worry that they will rein in the pace of economic growth, cutting into disposable income. U.S. gasoline prices have climbed to $2.92 a gallon on average, and are already more than $3 in several states. Companies like Walmart Inc. have warned that higher fuel prices are starting to threaten margins.

The political jockeying over higher oil prices has begun. President Donald Trump has pointed the finger at OPEC, blaming the cartel for “artificially Very High” prices in a tweet in April. Sen. Ed Markey (D., Mass.) has said Mr. Trump’s foreign policy is driving prices higher and is calling to reinstate the oil-export ban, which was lifted in 2015.

“Rather than sending American crude oil abroad to benefit Big Oil’s bottom line and foreign nations such as China, it should be kept here to help insulate consumers from geopolitical uncertainty and benefit American families,” a report to be released by his office on Monday says.

Some economists have argued that shipping oil abroad wouldn’t contribute to higher prices at the pump. Retail fuel prices have historically been more closely tied to the world benchmark rather than the national one, since gasoline is exported.

Some analysts said Brent’s push higher may be a signal that U.S. oil can’t fill the void in the global oil market quickly enough.

Geopolitically, it’s a big net negative for the US, since the main beneficiaries are countries that are at best frenemies and at worst flat-out threats. Saudi Arabia, Iran, Venezuela, and Russia are all big oil exporters and will, to varying degrees, use the coming windfall to do things that liberal democracies will not appreciate.

This in turn will push up interest rates, with potentially serious consequences. See There’s A Number That Ends This Cycle — But What Is It?

And the car companies, well, they’ll find themselves on the wrong side of history once again, going all-in on trucks just as Big Iron becomes too expensive to own. See America’s Dumbest Companies Repeat Their Biggest Mistakes.

For precious metals miners the picture is mixed. Mining is energy intensive, so higher oil means rising costs. But inflation is great for gold and silver prices, which will more-or-less offset oil. The experience of the 1970s, when gold and silver soared along with oil, gives cause for optimism.

Anyhow, rising oil is one more peak-cycle indicator that solidifies the comparisons with past peaks and the carnage that followed.