U.S. sanctions against Russia aren’t really working the way Washington had hoped. As the pressure builds, Moscow continues to duck, bob and weave to avoid the harshest blows. The Kremlin remains defiant and is even punching back at U.S. interests. What’s more, Russia is working on short-term and long-term strategies to insulate its people, businesses and economy from Western penalties. U.S. attempts to alter Russia’s behavior are leading Moscow to turn away from the West more and more and are also forcing some Russian companies, including the aluminum giant Rusal, to remake themselves.

In the 2018 Annual Forecast, Stratfor wrote that “Russia — the linchpin of Eurasia — is undergoing a shift in its foreign policy. Years of deteriorating ties with the United States and Europe have led Moscow to recalibrate its priorities and strategy heading into the new year.” The United States has intensified its sanctions campaign, and this move will lead to a greater divergence in relations between Russia and the West, as Moscow increasingly looks eastward.

See Echoes of the Cold WarSee Moscow Looks to the East

In early April, the U.S. Treasury Department instituted the harshest sanctions to date against Russia. The U.S. Congress had placed heavy pressure on President Donald Trump’s administration to act after it passed the Countering America’s Adversaries Through Sanctions Act in July 2017. That legislation sprang from Moscow’s role in the Ukrainian conflict and allegations of Russian meddling in the 2016 U.S. presidential election. It targeted seven oligarchs, 12 oligarch-owned companies, 17 senior government officials, one state-owned defense firm and one Russian bank.

The sanctions were particularly damaging to Rusal, the world’s second-largest aluminum company, and its owner, oligarch Oleg Deripaska, who was also punished. They restrict access to U.S. markets and threaten companies outside the United States with penalties for “knowingly facilitating significant transactions” for sanctioned people and businesses. Rusal, which produces about 6 percent of the world’s aluminum, was the only sanctioned company that has substantial dealings with U.S. firms, totaling over 14 percent of its revenues, or $1.4 billion. About 80 percent of Rusal’s business is outside of Russia. 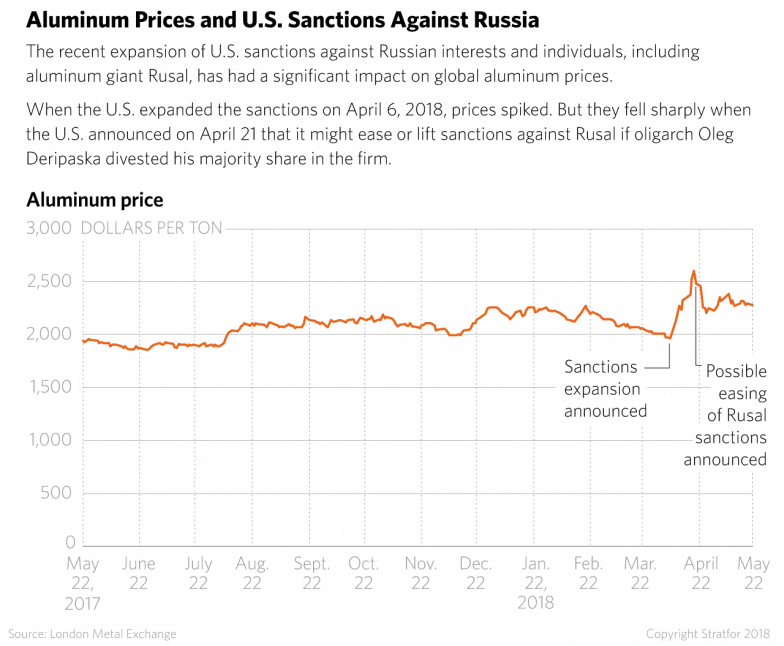 The sanctions have effectively shut off Rusal’s access to the international financial system, prohibiting the company from borrowing in dollars and keeping many other non-U.S. companies from doing business with it out of fear that they also will face penalties. The sanctions have also shaken the global aluminum industry; they pushed prices up by more than 30 percent in their first two weeks and sent companies, including Australian-British multinational Rio Tinto and some U.S. firms, frantically seeking alternative suppliers. Given Rusal’s size and global operations, the sanctions have pushed up costs to producers and prices to consumers worldwide.

Even after this global collateral damage, one thing remains unclear. Why did the United States specifically target Rusal and Deripaska in this round of sanctions? Whatever the reason, Russia has received a clear message: Any high-level figure or company is vulnerable to U.S. economic restrictions.

To fend off restrictions for now and in the near future, Russia has several options. The first is to negotiate with the United States. Indeed, Russia has indicated that it is open to the U.S. demand that Deripaska sell his 48 percent stake in Rusal. On April 23, the U.S. Treasury Department extended the deadline for U.S. companies and individuals to halt their business dealings with Rusal from June 5 to Oct. 23. On April 27, Rusal reported that it would appoint a fully independent board, along with a new management team, in hopes of getting off the sanctions list. Sources said that Deripaska and Rusal were in close communication with U.S. authorities as it took these steps. On May 25, Rusal confirmed that Deripaska had quit the boards of both it and his holding company, EN+ Group.

However, it remains unclear whether Deripaska’s resignation is enough to get the Rusal sanctions lifted. Kremlin spokesman Dmitry Peskov echoed this uncertainty, saying, “The signals coming from Washington now are very contradictory, so it’s hard to make any kind of conclusions.” Nevertheless, negotiating may sometimes prove effective because Washington has extended one deadline for cutting business connections to Rusal and offered a path to easing or ending the sanctions. This may indicate that Washington is serious about reversing some sanctions.

Another option for Russia in lieu of Deripaska’s divestment from Rusal is to provide financial support to vulnerable businesses. The country’s overall macroeconomic position is relatively strong, giving the Kremlin financial tools to work with. Immediately after the U.S. sanctions were passed, the Russian government announced that it was willing to step in to assist Rusal. Finance Minister Anton Siluanov pledged short-term liquidity assistance to the company if it were needed. He also said that funds from Promsvyazbank, a lender that the country’s central bank took over last year, could be used to support Rusal.

Moscow has also floated the idea of a temporary nationalization of the company. Industry and Trade Minister Denis Manturov said the government could purchase at least part of Deripaska’s stake in Rusal. He also said that if the divestment strategy does not work, Rusal could be converted into an exclusively domestic company. One source said that part of Russia’s excess aluminum could go to the state metals and precious stone repository Gokhran, while the rest could meet the needs of the military-industrial complex. However, outright nationalization would likely come with significant economic losses for Rusal, when compared to ensuring that the company regains access to the global market.

The Kremlin is also working on another alternative: setting up legal mechanisms to offer some protection to oligarchs affected by sanctions. One of the options on the table is to set up “onshore offshore” firms in the Russian exclave of Kaliningrad or in Primorsky Krai in the Far East. These businesses would be granted special tax status. Such zones would allow owners to transfer ownership of their companies back to Russia, but those businesses would still be considered to be domiciled “abroad” and could bypass the complex Russian bureaucracy involved in bringing companies onshore.

A draft bill reportedly has been circulated by the Ministry of Economic Development and is now being discussed at the ministerial level. Prime Minister Dmitri Medvedev confirmed the Kremlin’s plans to set up such domestic offshore districts “very soon.” However, the U.S. sanctions are intensively focused on capital repatriation, making it questionable that such a scheme could work. At the same time, President Vladimir Putin has been campaigning to “de-offshorize” Russian business, but the oligarchs have been reluctant to bring their holdings and money back to Russia because of their concerns about a Kremlin takeover, making this another problematic option.

Even if the United States pulls back on Rusal, Moscow cannot be sure that other firms or oligarchs won’t be hit with sanctions down the line as the Russia-West standoff plays out. So, in recent years, Russia has been pursuing a long-term strategy to insulate itself from U.S., as well as European Union, sanctions.

As trade and investment ties with the West have declined since 2014, Russia has focused on expanding economic and broader political linkages — including energy exports and the sale of agricultural products and weapons — to the East. This is particularly the case with China, which has become Russia’s largest trade partner, but Russia has also looked to expand economic ties with other countries in the Asia-Pacific, such as Japan and South Korea. These two countries were important participants in the most recent St. Petersburg International Economic Forum.

But Russia isn’t looking just to the east; it is also looking to the south, to the Middle East. It has been expanding trade ties with countries such as Turkey and Egypt, building out its economic relationship with Iran, and seeking greater investment and energy ties with Gulf Cooperation Council countries such as Saudi Arabia. It is looking to use the Moscow-led Eurasian Economic Union as a vehicle for expanding ties and signed trade agreements with both China and Iran on May 17.

However, Russia is unlikely to replace all of its economic ties with the West with ties to the East. Europe, for example, will long continue to be its main market for energy exports, and the country’s exposure to the U.S.-dominated global financial system can never be fully cut off. Nevertheless, the overall trade balance and economic structure that Russia is pursuing will gradually shift it away from the West. Moscow hopes this move will give it more insulation from U.S. sanctions in the long term.

Ultimately, the purpose of U.S. sanctions has been to shape Russia’s behavior and force Moscow to become more compliant on key issues such as the Ukrainian conflict. However, the sanctions so far have had the opposite effect. Russia has retained and increased its support for the separatist conflict in Ukraine, while pursuing a military buildup in areas such as Crimea and Kaliningrad. It has also boosted its involvement in areas of strategic interest to the United States, including Syria, Iran and North Korea.

During the later years of the Cold War and early years after the frozen conflict had thawed, Moscow learned that trading geopolitical concessions for economic benefits can have a net negative impact on its national security and global standing. Unless the United States takes drastic action to cut off Russia from the global financial system, Moscow is unlikely to change its foreign policy to be more compliant with the United States. As the era of great power competition intensifies, Moscow will look instead to other powers such as China and Iran to challenge the U.S. position globally. Thus, Russia may make certain tactical concessions to the United States to protect its economic interests, but the U.S. sanctions are unlikely to result in the broader strategic shifts that Washington is seeking.