The weather is about to get a lot heavier for Argentine President Mauricio Macri. He has begun negotiations with the International Monetary Fund (IMF) for up to $30 billion in flexible credit to halt the Argentine peso’s slide, but the move has hurt Macri’s standing, providing his opponents with abundant political ammunition to fight his policies. An IMF loan might help Argentina boost its international reserves and tackle the peso’s depreciation, but the decision to beat a path to the door of an old foe — at least in the minds of many Argentines who remember the country’s ruinous financial crisis in 2001 — could seriously dent Macri’s chances of retaining his office in next year’s elections.

Argentina suffers from a high current account deficit and inflation, partly because of a rising U.S. dollar. The dollar’s growing strength will jeopardize Argentina’s continued trade and economic liberalization efforts after 2019, when Argentines go to the polls for a presidential election.

Dealing With the Dollar

The increasing strength of the U.S. dollar over the past month has exposed the financial vulnerability of some emerging economies, such as Argentina’s, that have been running high current account and trade deficits. To make things worse for Argentina, the country hasn’t succeeded in effectively reducing its high inflation, which is expected to exceed 20 percent this year. The peso dropped more than 20 percent against the dollar just in May, thereby applying even more inflationary pressure on Argentina’s faltering economy.

Another financial headache for the Argentine government is Argentina’s high fiscal deficit. Since Macri assumed power in December 2015, Buenos Aires has been financing its deficit with debt issued in foreign currencies. After reaching an agreement with the holders of the country’s defaulted debt, the government lifted foreign currency restrictions and — buoyed by favorable global credit conditions and foreign investors’ trust in the Macri presidency — began tapping the international market for credit. Buenos Aires, however, took such action to cover Argentina’s fiscal deficit rather than use the money to invest in major infrastructure projects — and regardless, the country’s external debt grew 35 percent over the first two years of Macri’s administration. 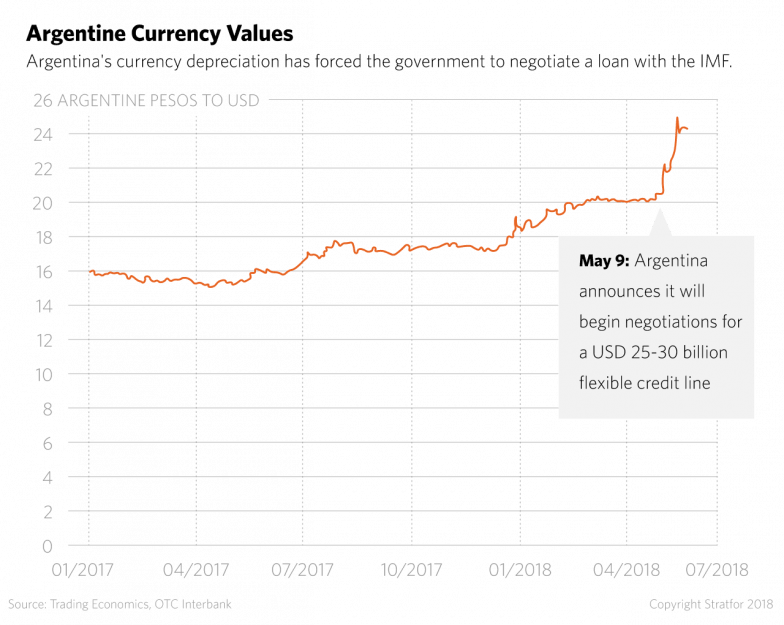 As global credit conditions have tightened in recent months, Buenos Aires has faced greater difficulties in financing itself through external debt. On top of that, Argentina’s trade deficit has continued to rise over the past few years, resulting in the country reporting higher current account deficits. Last year alone, Argentina’s current account deficit reached 4.8 percent of its gross domestic product. As a result, the government has launched negotiations with the IMF to obtain a standby loan that would allow Argentina to always avail itself of a flexible credit line so as to better confront a rising dollar and tougher credit market conditions. In fact, as soon as the government began its talks with the IMF, Buenos Aires announced it would revise its fiscal deficit target for 2018 from 3.2 percent of GDP to a more ambitious 2.7 percent.

How to Lose Political Capital

Naturally, however, the “catch” for any country receiving an IMF loan is the lender’s demand for tight fiscal adjustments — a requirement that frequently elicits a political backlash in Latin America. Argentina’s government will be compelled to cut public spending by an even greater amount and accelerate the pace of economic reforms if it is to meet its lofty goals to reduce its fiscal deficit. So far, the government has been adopting a gradualist approach by slowly reducing state subsidies on a piecemeal basis to avoid exacerbating social tensions. Likewise, the government has steered clear of any tax hikes — even passing a measure last year in which it simplified and reduced taxes for some sectors, such as the soybean industry, whose export taxes has fallen from 35 percent in 2015 to 27.5 percent this year.

The government has denied speculation that it will halt the tax reduction for soybean exports, but its announcement of new fiscal targets has cast doubt on the future of the decreases. Buenos Aires has admitted that it will cut public spending, possibly by reducing the transfer of funds to provinces for infrastructure projects. Cutting public spending would create political risk for Macri, who enjoys no majority in either the Senate or the lower Chamber of Deputies to push through economic reforms. Macri has succeeded in passing key economic reforms such as tax and pension reforms because he negotiated the support of opposition governors by transfering funds from the national government to the provinces. In exchange, the governors agreed to apply pressure on some opposition members of Congress to approve the government’s plans on key economic reforms.

But by reducing the transfer of funds to the provinces, Macri is unlikely to secure enough support in Congress to pass pending economic measures such as a deeply unpopular labor reform. Accordingly, the government will have little choice but to impose tighter fiscal adjustments by cutting public spending or raising taxes in some sectors instead of truly implementing more profound structural reforms that would require congressional approval.

Unsurprisingly, Macri’s decision to sit down with the IMF is reducing his popularity. According to a report by Argentine newspaper Clarin, more than 10 polls have highlighted public opposition to Macri’s decision to resort to the IMF. One poll by D’Alessio IROL and Berensztein, for example, showed that 75 percent of Argentines disapproved of the government’s request for loans from the IMF.

Despite the unpopular measures necessary to obtain a standby loan from the IMF, the government still might attempt to accelerate its fiscal adjustments — even though this would likely presage a loss of congressional and popular support. This, in turn, would put the sustainability of Argentina’s economic and trade reforms at risk after 2019, when the country will hold a presidential election.

Temporary divisions within the political opposition, especially among the Peronists, could help Macri manage the discontent, but a continued erosion of his political capital appears inevitable in the quarter to come. Macri likely will pursue re-election in 2019, but the tough task of taming high inflation, as well as the trade and current account deficits, is weakening him politically — to say nothing about the negotiations with the IMF. In such a situation, the omens would appear less than auspicious for Macri’s political fate, as well as that of his economic and trade liberalization policies.