The recent growth acceleration in the EU could distract attention from problems of the common bloc. Fortunately, you can always count on Italy. Whenever you start thinking that only bright future is ahead of the union, the descendants of the proud Romans remind about themselves. Indeed, Italy focuses three major EU’s problems like in a lens. What are they and how could they affect the gold market?

First, populism. As you remember, Italians held general elections in March. As we reported then, the populist party founded by comedian Beppe Grillo won about one-third of the votes. Since then, the Five Star Movement and League, the two biggest parties in the new parliament, have been negotiating to form a new government. In May, they finally published a contract for their shared platform.

At first glance, it should be good news, as the deal ends months of political uncertainty in Italy. Moreover, the leaders of the winning parties dropped some of their most explosive election campaign promises, such as the idea to organize referendum about Italy’s membership in the eurozone or even to unilaterally exit from the common currency bloc.

But investors definitely did not like the deal (and the following reaction of Italy’s President). As one can see in the chart below, the yields on Italy’s ten-year bonds jumped above 3 percent, the highest level since 2014.

Moreover, the Milan stock index slumped about 2.5% in few days after the announcement. And the euro fell against the U.S. dollar, as the next chart shows. 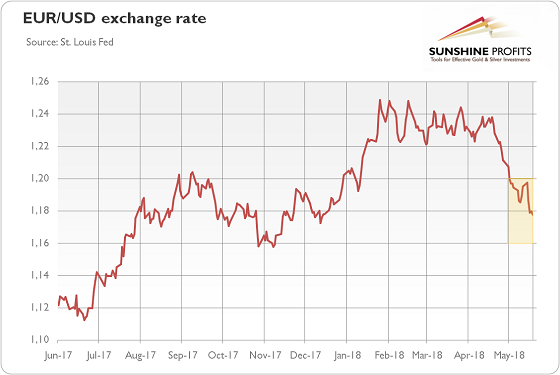 Why? Well, the reason is simple. The deal calls for more government spending (poor families are to get a €780 basic monthly income) and the tax cuts (we love lower taxes, but when lower spending accompanies them). Hence, although Italian politicians from the League and Five Star Movement gave up some of their most startling campaign pledges, investors are still worried about the new government’s approach to public debt. The document says that:

The government’s actions will target a program of public debt reduction not through revenue based on taxes and austerity, policies that have not achieved their goal, but rather through increased GDP by the revival of internal demand.

However, it does not specify how that revival should happen. Traders fret that it would entail even bigger fiscal deficits – as a reminder, Italy’s public debt is the second largest in the EU behind Greece. Actually, the new likely government has also called on the EU to increase its budget deficit limit of 3 percent of GDP. It will create tensions between Rome and Brussels, adding to the EU’s problems and investors’ headache.

Moreover, Italy’s President Sergio Mattarella ignored the triumphant partier and nominated Carlo Cottarelli as technical prime minister with the goal to organize snap elections in the autumn or early next years. Investors are afraid that they may lead to an even stronger mandate for the country’s populist parties. The euro declined further after that decision.

Second, poor banking sector. Although the growth rebounded and the government deficits were curbed, the eurozone has not yet resolved its banking crisis. There is definitely something fishy in European banks’ assets, as most European banks have price-to-book ratios below 1 (for example, Italian UniCredit’s ratio is 0.23). Just think what it means: investors could purchase a bank at the current prices and liquidate its assets immediately at book value, making huge profits. But they do not do it, as they know that there is the skeleton in the closet.

And its name is the NPL, i.e., the non-performing loans or loans where borrowers have fallen behind in their payments. The bad debts across the euro area amount to about €760 billion. Italian banks are in a particularly bad position, as the NPLs constitute 12.1 percent of all loans, while the EU-wide average level is 4.4 percent. And they held about 30 percent of the bloc’s non-performing loans. Just think about all the problems the European and Italian banks will be confronted with when interest rates increase in the future.

Third, slow growth. The eurozone’s pace of growth, although rebounded, is not staggering. But Italy is the real sick man of Europe. It shouldn’t be surprising given the weak banking sector and many zombie companies (they contribute to the anemic growth because they poorly use resources that could be used more productively somewhere else). As the chart below shows, between 1999, the year of introduction of the euro, and Q1 2018, its economy has grown by merely 8.6 percent. Anti-EU sentiment among Italians shouldn’t be now surprising. 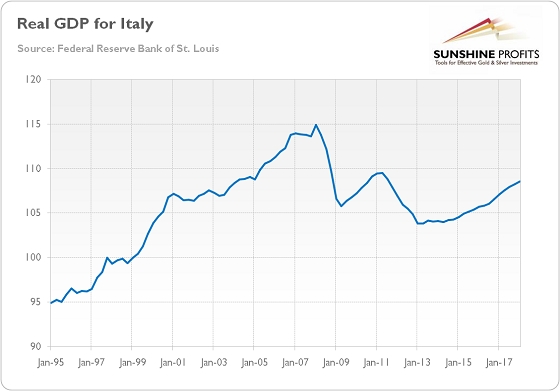 What does it all mean for gold? Well, the formation of a genuinely populist government will rather not help the Italy’s economy. Remember Syriza? So we could have another Greek-like crisis. But with one crucial difference. Greece accounts for 1.8 percent of the eurozone GDP and for 3.3 percent of its public debt, while Italy contributes 15 percent of the bloc’s GDP and 23 percent to the eurozone’s pile of public debt. Hence, Italy’s problems are much bigger risk to Europe’s stability. It implies that gold’s sensitivity might also be stronger. Surely, Italy’s problems are not new, but the country will be run now by populists who openly oppose the austerity measures and call for higher budget deficits. It could increase the safe-haven demand for gold.

But investors shouldn’t forget about the currency channel. What we mean is that worries about Italy will definitely not help the euro. With fresh concerns about the eurozone, the rally in the U.S. dollar may continue, which will put gold under pressure.