Home prices are still rising pretty much everywhere in the US, with California as usual leading the way. State-wide, the median CA home is now above $600,000, up 9% year over year. In San Francisco County, homebuyers are paying an average of 18% above the asking price, and price per square foot is now more than $1,000.

Even Silicon Valley residents, who are used to this kind of thing, are finding it remarkable. See ‘Facebook is taking everything’: rising rents drive out Silicon Valley families.

Most of the rest of the country isn’t California-level crazy, but it is at historic extremes: See US home prices are the least affordable in almost a decade.

And in an increasing number of places this is emphatically not a good thing. Even homeowners who are booking nice paper gains on their properties are giving back a lot of that in higher taxes. Meanwhile, for those without houses things are getting harder by the day. A couple of examples:

(Idaho Statesman) – In a study contained in the latest UCLA Anderson Forecast, released Wednesday, UCLA found that higher median rent and home prices are strongly correlated with more people living on the streets or in shelters. The research backs other studies that have found a similar relationship.

Last year, Zillow released a study that showed a 5 percent rent hike in L.A. County – where more than 50,000 are estimated to be homeless – would cause 2,000 additional people to lose their homes.

(The Day) – The housing markets that have seen the greatest increases in home values have also seen some of the most pronounced decreases in birth rates, according to an analysis by the real estate site Zillow.

The effect was especially pronounced in California, where home prices have been rising rapidly in recent years. In Alameda County, in the Oakland area, home prices were up 60 percent between 2010 and 2016 while the birth rate among young women dropped by 24 percent. A 58 percent increase in home values in Santa Clara County, in the San Jose area, was associated with a 20 percent reduction in the birth rate. 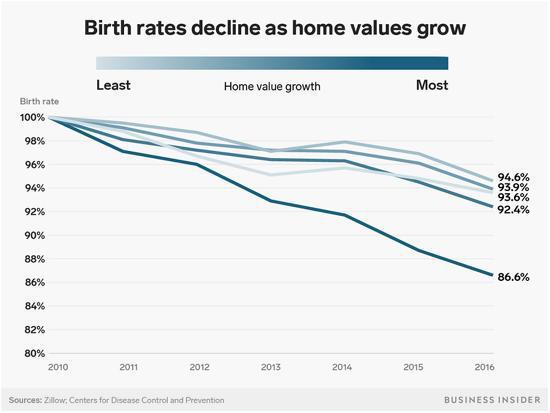 How much longer can home prices and rents soar before the damage becomes systemically dangerous? Based on the following chart, not much longer. 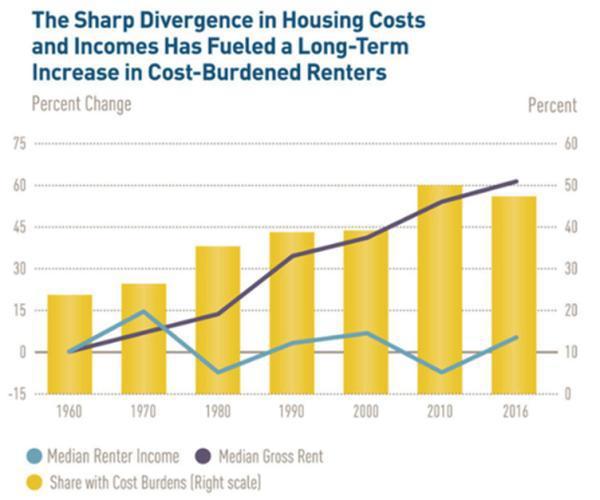 Rising rents combine with stagnant incomes to produce a surge in “cost-burdened” renters – who presumably don’t have much left over to buy new cars, eat in pricey restaurants or do any of the other things that drive consumer spending, which in turn drives GDP growth.