By John Rubino – Re-Blogged From http://www.Gold-Eagle.com

Beginning in early Spring, gold and silver faced two serious headwinds: Seasonality – that is, the annual decline in bullion demand from China and India once wedding season ends – and the internal structure of the futures markets, where the big players in gold had lined up in ways that historically point towards weak prices for a while.

Both of these negatives are still in place (hence the smack-down of the past week) but both are transitioning to positive. At some point soon, the precious metals environment will lose the headwinds and gain at least two strong tailwinds.

Seasonality generally shifts to positive between September and December, so that’s coming shortly. And the paper market structure, as detailed in the commitment of traders (COT) report, has been moving in a positive direction pretty aggressively lately. Here’s gold, courtesy of the GoldSeek website:

In this market a bullish reading is when speculators are short and commercial traders are mostly long. As you can see, they’re not there yet but are moving that way fast.

So we’re approaching a point where the market structure for both gold and silver point towards at least a few strong months. And good times for the metals should mean great times for the miners, which are about as beaten-down as they’ve ever been. The following chart shows just how boring and dispiriting the action in these stocks has been so far in 2018.

The next chart shows what happened the last two times gold miners got this cheap, in 2005 and 2008. Both times they more than doubled off their lows in the next few years.

Will they do it again? Well, at the risk of jinxing this great setup, the numbers – record debt at every level of every major society, a soaring global money supply, spiking political discontent – all point towards more turmoil and a much bigger resulting need for safe haven assets.

The following chart shows the growth in global debt over the past three decades, with the green bars representing the decade ending in December 2017. If downturns caused by excessive fiat currency debt drove the past two central bank balance sheet expansions — which in turn drove the jump in precious metals — then the recent credit spike ought to be worth an epic run in gold and silver. 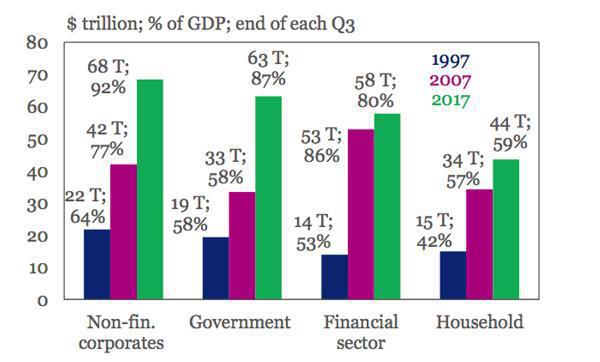 As for what sets off the next explosion, consider margin debt, which is created when investors borrow against their stocks to buy more stocks. When this gets unwieldy, a wave of margin calls either causes or contributes to a cycle-ending bear market.

If history is still a useful guide, we’re in for another bear market in financial assets, which sparks central bank easing, and consequently lights a rocket under gold and silver.