By SRSrocco Report. – Re-Blogged From http://www.Gold-Eagle.com

The world is standing at the edge of the financial abyss while most investors are entirely in the dark.  However, specific indicators suggest the market is one giant RED BLINKING LIGHT.  One of these indicators is the amount of margin debt held by investors.  What is quite surprising about the level of investor margin debt is that it has hit a new record high even though the market has sold off 2,500 points from its peak in February.

It seems as if investors no longer believe in market cycles or fundamentals. Instead, the Wall Street saying that “This time is different” has become permanently ingrained in the market psychology.  For example, it doesn’t seem to matter to the market that Amazon makes no money on its massive online retail business.  The only segment of Amazon’s business that made a decent profit last quarter was from its Cloud hosting services.

So, the new Amazon way of doing business in the United States is to destroy the retail industry so it can break even.  I gather once many of the retail chains have gone out of business; Amazon might then increase its prices and shipping costs.  But for now, the mighty online retail chain is firmly entrenched in the U.S. RETAIL CANNIBALIZATION mode.

Unfortunately, if Amazon is successful in destroying a significant portion of the brick and mortar retail industry, it will spell bad news for Americans when the next financial collapse takes place.   Why?  Well, the simple answer is that we can’t go backward.  Think about this for a moment.

Mom and Pop retail stores in the downtown areas were the backbone of the early U.S. retail market.  However, they were largely destroyed by Walmart.  But, at least Walmart employed a lot of people and had stores all over the country, easy for customers to access.  Now, with Amazon’s door to door delivery system, you don’t need thousands of stores in all cities throughout the country.

So, what the hell happens if Amazon goes belly-up during the next market crash and economic depression?  The U.S. retail infrastructure will be destroyed to such a level that Americans will have a lot fewer places and options for purchases goods.  The market has no idea that this is taking place.  Instead, they believe that the Amazon miracle of selecting millions of products online and getting them delivered right to one’s front door will last as long as the 1,000 year Third Reich.. .which only lasted 12 years.

Regardless, the economic and financial markets today are setting up for one heck of a fall.  According to FINRA, the Financial Industry Regulatory Authority, investor margin debt reached a new high of $669 billion in May: 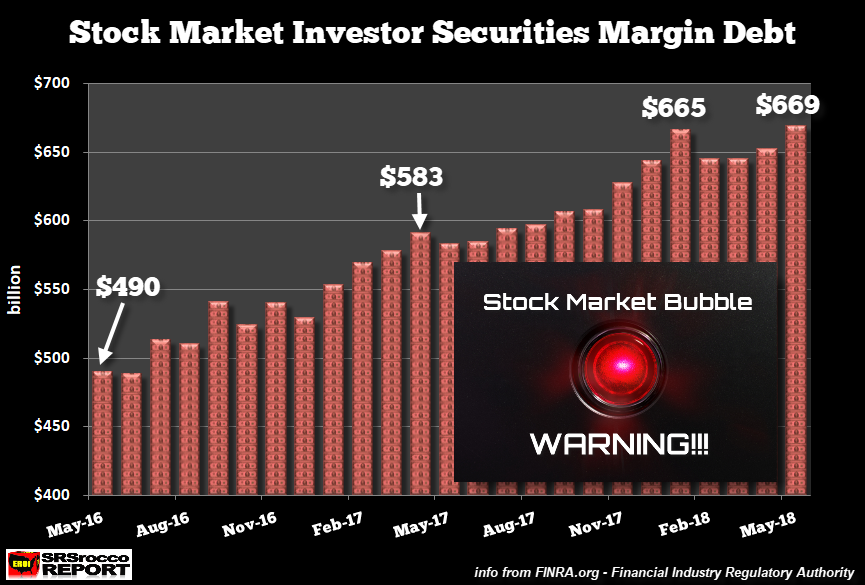 Investor margin debt is up from its previous high of $665 million in January when the Dow Jones Index topped 26,500 points.  However, as I mentioned, the market has sold off several thousand points while investors placed an even higher amount of margin bets in May.  Below we can see that the Dow Jones Index continues to trade in a range between 23,800 and 25,400: 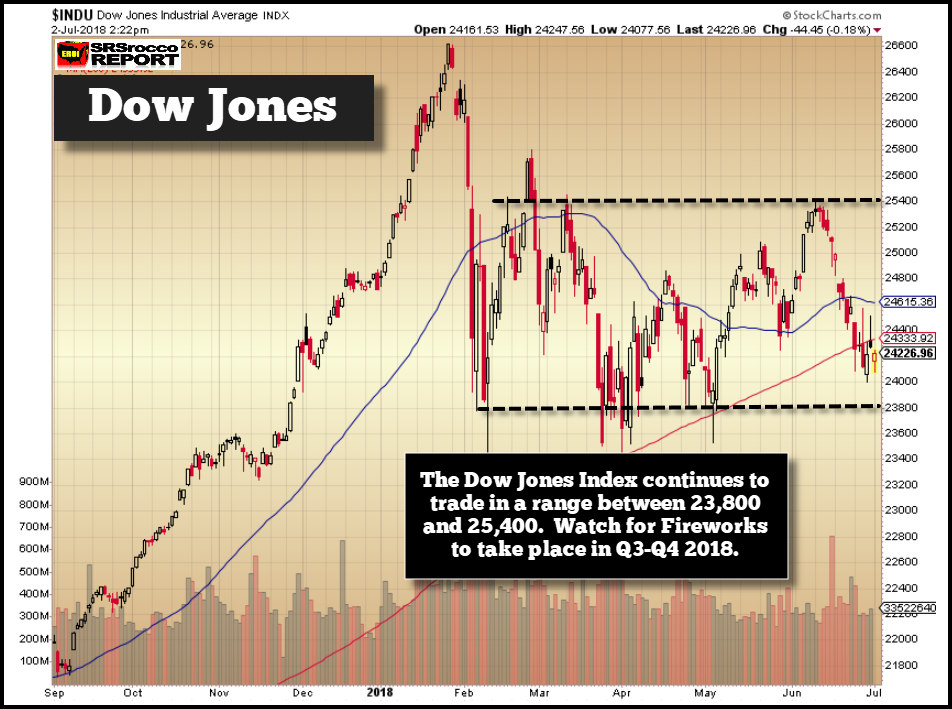 I stated in several articles and videos that the Dow Jones Index was not likely to surpass its high, but remain in a trading range.  So far, this is exactly what is taking place in the market.  Although, I am surprised that investors piled more margin into this market knowing that we are overdue for a massive correction… at the very least.

If we look at the Advisor Perspectives updated chart, the total Margin Debt is nearly $170 billion higher than the peak in 2007: 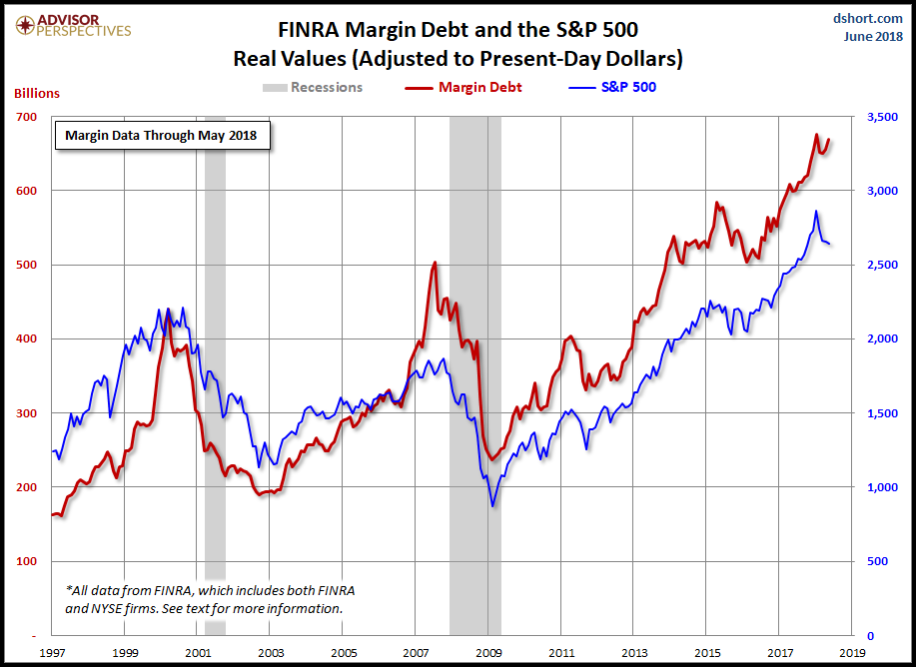 Also as you can see in the graph above, we are almost ten years into a business cycle without a significant correction.  Back at the beginning of 2016, when the Dow Jones Index lost 2,000 points, investors, who thought this was the beginning of the next bear market, plowed into gold and silver.  Flows into Gold ETF’s spiked the second highest level Q1 2016 during the brief correction.  The quarter with the most Gold ETF inflows was Q1 2009, as investors panicked when the Dow Jones fell to 6,600 points.

It’s hard to forecast how these markets will move anymore, but due to the massive debt and leverage in the system, I believe we are going to start seeing major Fireworks during Q3-Q4 2018.