Today’s Wall Street Journal contains a couple of charts that illustrate a relationship that’s not getting much media attention these days: The fact that tightening labor markets are forcing companies to raise wages, in the process squeezing their own profit margins.

Historically this margin compression has been either a cause of or contributor to cyclical turning points — in other words it coincides with recessions and equity bear markets.

The first chart shows wages rising after an unusually long period in which they didn’t rise much at all. They’ve still yet to achieve the velocity of previous recoveries, but anecdotal evidence of desperate employers raising wages and lowering standards (see here, here and here is now so widespread that continued wage gains are pretty much baked into the cake. 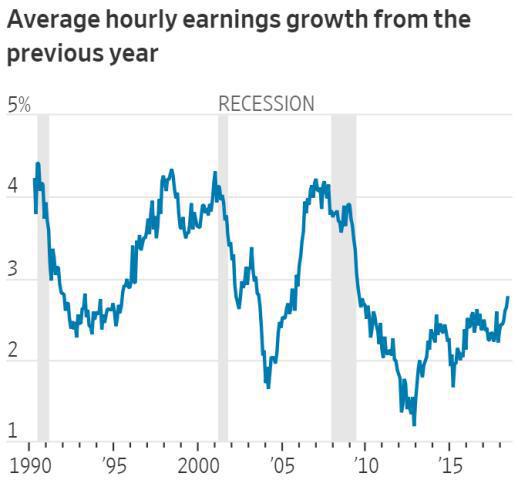 What has this meant for corporate profit margins in the past? Big drops, as higher wages combined with an inability to raise prices commensurately left corporations with less money at the end of the day. 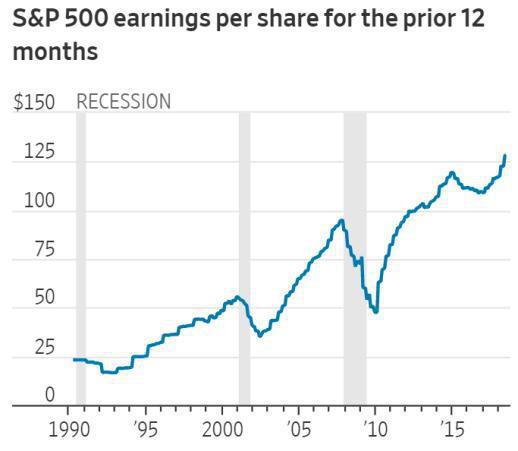 Since a share of stock is simply a claim on a portion of a public company’s earnings, falling profits obviously lead to falling share prices:

Here’s an excerpt from the WSJ article:

Rising wages are beginning to eat into the profits of some U.S. companies.

Businesses from dollar stores to hotel operators to fast-food chains have warned in recent months that higher labor costs have been a drag on their profits—a potential headwind for the nine-year stock-market rally as it struggles for momentum ahead of the second-quarter earnings season.

Average hourly earnings increased 2.7% in June from a year earlier, according to the Labor Department’s monthly jobs data released Friday. Although that is below the 2.8% economists expected, wages have risen at least 2.5% for 16 of the past 17 months, a faster pace than recorded earlier in the economic expansion.

That is good news for U.S. workers who have seen tepid wage increases over the past few years and may benefit some businesses as consumers become more willing to open their wallets for discretionary purchases.

But the higher costs pose a threat to some U.S. companies that are already facing trade-related tensions and a limited ability to raise prices to keep up with inflation. Fears about rising wages sparked concerns back in February and sent stocks tumbling as investors worried the tightening labor market may finally trigger higher inflation.

“At the end of the day, I haven’t heard this many CEOs talk about shortages in skilled labor and wage increases to attract talent in a long time—in at least a decade,” said Will Muggia, president and chief executive at Westfield Capital Management in Boston.

In a traditional economic cycle, companies would attempt to pass along the increasing cost of labor to customers, but that doesn’t appear to be happening this time.