China’s growth over the past decade has been not just impressive, but historically unprecedented. No single country has ever added this many factories, roads, airports and entire new cities in so short at time.

But the transformation has come at a cost, in the form of a debt bubble that’s starting to look unstable. Beginning in 2015 non-performing loans and bond defaults both started trending upward and are now close to levels at which the risks become systemic. The following three charts tell that tale: 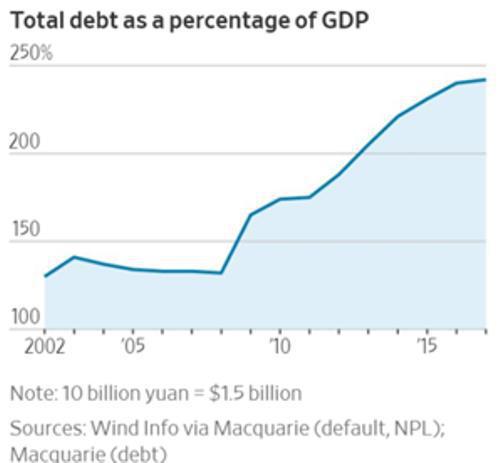 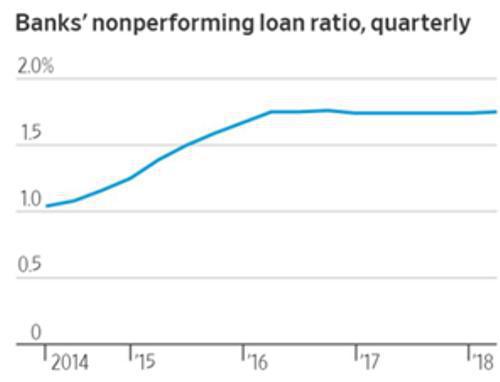 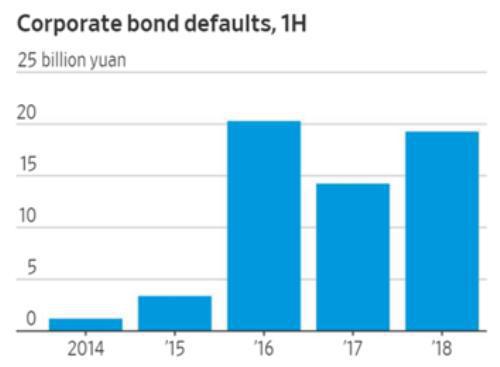 In response, China’s government has been trying to slow the bubble’s expansion without bursting it (which a quick glance at America’s track record would imply is impossible). Among other things, Communist Party leaders (that’s right, the Party is still in charge) have been tightening bank lending regulations and telling local governments to cut back on the empire-building.

But then – and this is how it always works for debt-addicted systems – a couple of things happened to make staying on the wagon much harder. The US began a trade war with China and other major trading partners (though mostly with China), which will if it continues, slow down global trade and cut the inflow of foreign capital to export-dependent economies. And the past couple of years’ credit restrictions have started to bite, slowing China’s domestic economy and making it harder to provide jobs for all the people who have come to expect upward mobility and might take to the streets if they don’t get it.

So – again as addicts tend to do – China has decided that maybe it’s wise to delay the tightening for a while and allow the leverage machine keep running. According to yesterday’s Wall Street Journal,

BEIJING—China is letting up on its drive to keep a lid on debt growth as it faces a softening economy at home and escalating trade tensions with the U.S.

Senior Chinese leaders led by President Xi Jinping have been sending unmistakable signals that the campaign to rein in financial risk isn’t the overriding priority it has been. Financial regulators are delaying the release of rules to curtail risky lending by banks and other institutions out of concern that the regulations would choke off a source of funding and rattle financial markets already shaken by worries over trade and the economy, people familiar with the decision said.

In a turnabout, the State Council, China’s cabinet, stopped hectoring city halls and townships to restrain spending and instead last week launched an inspection to urge them to speed up already approved investment projects to re-energize growth. The central government often uses inspections as a way to evaluate local officials and get top-level directives across.

An April meeting of the Politburo, the inner sanctum of power, offered an initial sign of the shift in government priorities toward growth. Mr. Xi, who presided over the meeting, called for expanding domestic demand as authorities continued to contain financial risks. Such pro-growth emphasis had been absent in Politburo meetings since 2015.

China’s economic growth has been on a controlled descent for most of this decade, propped up at times by shots of easy credit that have helped make debt a long-term threat for the world’s second largest economy. With growth still buoyantly above the government’s 6.5% target, Mr. Xi has taken aim at debt and other financial risks the past two years to put the economy on sounder footing.

Now, that campaign is taking its toll. Signs are building that the economic expansion is losing steam—from weakening investment in factories to anemic household consumption and rising corporate defaults.

The trade fight with the U.S. puts growth further at risk, making Mr. Xi’s initiative look unsustainable, government advisers said. The central bank in April began freeing up more funds for banks to make loans. The Chinese leadership is expected to further loosen China’s fiscal and monetary stance at a meeting later this month of the Politburo, government advisers and economists said.

Debt levels, especially for companies and local governments, have soared since China unleased a massive financial stimulus to ward off the 2008 financial crisis. Debt stood at 242% of economic activity at the end of 2017, according to Macquarie Group.

“If China has an across-the-board loosening up again, borrowing by state-owned enterprises might get more relentless,” said Zhu Chaoping, a market strategist at JP Morgan Asset Management. “This is the risk here.”

To paraphrase Joni Mitchell, all credit bubbles meet this same fate someday, as the prospect of stopping becomes too scary to contemplate. So the debt binge continues, with leaders promising to “contain financial risks” when really they’re just riding the tiger, hoping to hang on until … well, something happens to save them.

But experience – and we have a ton of it now – teaches that nothing can “save” a system that has taken on way too much debt. “Inflate or die” becomes the guiding principal right up to the end.