Skip to content
HomeWill The Fed’s Tightening Trigger Another Crisis?

The recent currency and debt crises in Argentina and Turkey raise questions about the condition of the global economy in general and the emerging countries in particular. Are they merely isolated events without broader implications or are they canary in the emerging market mine?

This question is timely and worryingly justified in the context of the ongoing Fed’s tightening cycle and the ECB’s shy steps toward normalization of its monetary policy. Historically speaking, the Fed’s tightening used to end with some sort of market crisis, including U.S. recession and turbulences in the emerging markets which rely heavily on dollar-denominated debt (as a reminder, the dollar lending outside the U.S. stands at about $11 trillion today). As one can see in the chart below, practically all recessions in America occurred after the Fed’s tightening cycle. 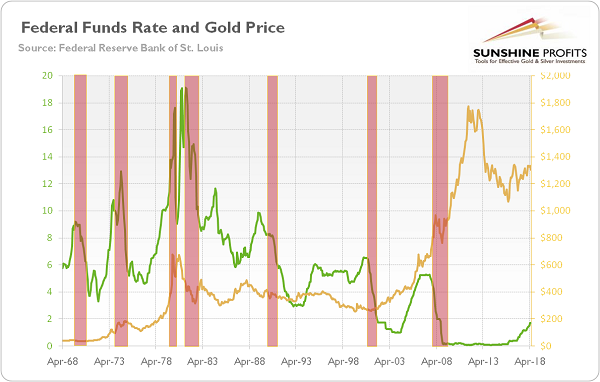 And the same applies to number of emerging market crises: Tequila crisis occurred in 1994 when the Fed was tightening. The Russian and Asian financial crises happened later, but their roots were similar: the raising of U.S. interest rates which led to a strong U.S. dollar.

The mechanism is quite simple: when the Fed tightens its monetary policy, it drains dollar liquidity and raises borrowing costs for much of the world economy. In short: the combination of higher interest rates and stronger greenback, which is the world’s reserve currency, is often lethal for the global economy in general and the emerging markets in particular. And what is more: the Fed unwinds its balance sheet when the Treasury needs to issue more bonds to raise funds for rising fiscal deficits, which will only lift the interest rates further and will aggravate the illiquidity of dollars, risking a crisis.

In other words, the Fed’s unwind of its balance sheet, rising interest rates and strong greenback are to be blamed for creating a dollar shortage and higher borrowing costs, putting the emerging markets into troubles. This is because they typically borrow in dollars, while earn incomes in local currency. Hence, on top of higher interest rates, rallying greenback means that they will have to repay their debt in more valuable dollars over time. This leads to the capital outflow from the local currency into the dollar, sending the emerging market currencies down and exacerbating the original problem.

Although the above reasoning is compelling, it might be just a logical fallacy post hoc ergo propter hoc, which in Latin means: “after this, therefore because of this.” Temporal sequence suggests causality, but it does not have to be the case. Let’s assume that somebody makes a toast for his national soccer team at the World Cup, and just after this the team scored a goal. Does anyone believe that a toast caused a goal?

Similarly, the Fed’s tightening does not have to cause all the crises. After all, the Fed tightens when the economy expands, so it must precede the bad times. Actually, it would be really odd if the U.S. central bank tightens during recession. But we definitely need more evidence to state that the Fed’s hawkish actions cause something bad, especially given the U.S. central bank’s very cautious approach.

The next chart paints the Fed’s balance sheet and commercial banks’ reserves since 2003.That small drop you see at the end of the chart (we marked that area by yellow rectangle) is a decrease of 4 percent from the peak reached in early 2015. Do you really believe that this tiny decline in the Fed’s balance sheet is the major cause of the dollar illiquidity and the turmoil in the emerging markets? 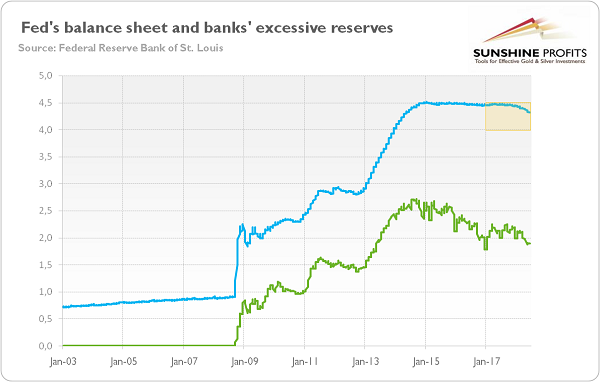 We doubt it. Why? First, it’s a small quantitative change. Second, the decline in the Fed’s balance sheet has not caused dollar shortage. Instead, as the chart above clearly shows, it has vacuumed dollars out of commercial banks’ excess reserves, i.e. money which has stayed “idle” on the Fed’s accounts in any case.

Third, although the Fed has been tightening, the monetary policy remains accommodative. This is why the financial conditions are still easy, as one can see in the chart below, which shows the St. Louis Fed Financial Stress Index and Chicago Fed National Financial Conditions Index. Both of them are negative, which indicates a below-average financial stress or financial conditions that are looser than average. 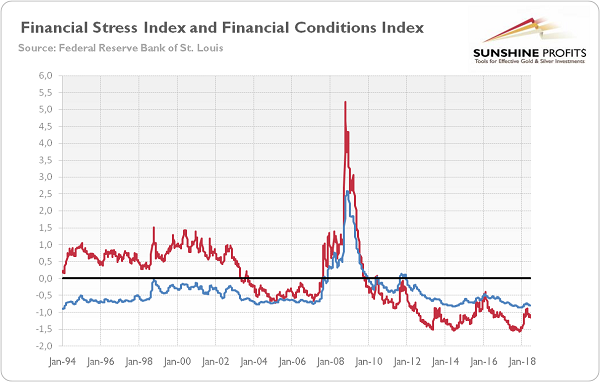 We don’t want to say that “this time is different”, but, well, in a sense it is. The pace of monetary tightening is very gradual, not to say embarrassingly slow. The global long-term real interest rates are still extremely low and financial conditions remain easy. Many foreign central banks, especially in Asia, are awash with dollar assets, while fiscal policy is becoming looser on the global scale. Hence, the precious metals investors should not bet that the Fed’s tightening is to cause the next (emerging markets) crisis, which will definitely boost the gold prices. It might be the case, but we are not close to this scenario, at least not yet.