Skip to content
HomeTariffs on U.S. Soy Will Strengthen Brazil’s Hand in the Chinese Market

U.S. farmers could soon start to feel the sting of the White House’s trade battles, especially as the fallout from its skirmishes with China begins to hit. Tariffs imposed by Beijing in retaliation for those slapped on Chinese goods by the United States include a 25 percent levy on soybeans, a key import. The world’s second-largest economy is also its largest soybean importer, but China appears well positioned to weather the higher prices that tariffs have brought. In the end, higher prices for U.S. soybeans could accelerate changes already occurring in the Chinese market, eroding U.S. market share and spurring China to further increase domestic production of the crop.

A number of countries have imposed multiple rounds of tariffs as the global trade dynamic shifts, and the U.S. agricultural sector is finding itself caught in the fallout. Tariffs imposed by China on U.S. commodities such as soybeans will likely accelerate market trends already in motion.

China currently buys more than 60 percent of total global soybean exports, with half of that demand filled by Brazil. The United States, meanwhile, holds about a 40 percent share of the Chinese market. The import tariffs are pushing Chinese importers to seek alternatives to the U.S. supply. But given the sizable U.S. share of the Chinese market, Beijing will not be able to entirely forgo U.S. soybeans. For now, the Chinese government will absorb the higher costs that the tariffs impose, a policy that will become easier if global soy prices, which hit a 10-year low after China announced its tariff plan, continue to decline. 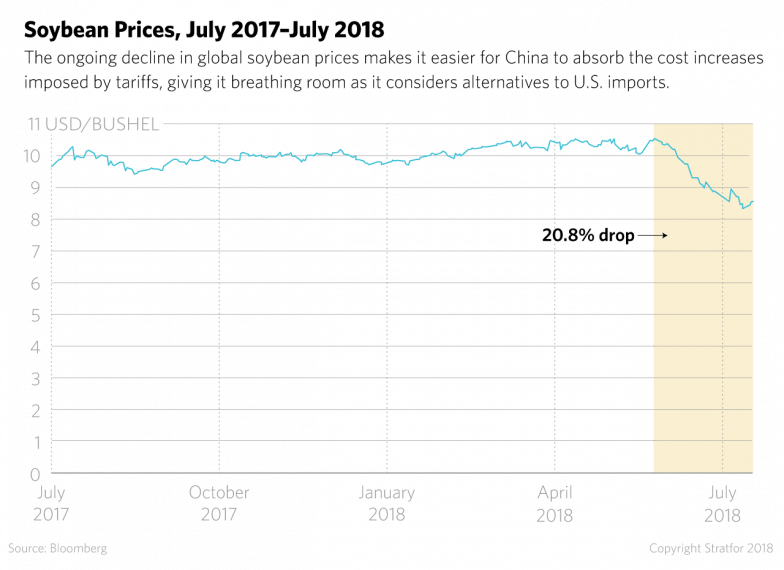 China can tap a number of potential alternatives that could eventually reduce the U.S. share of its soybean market. For one, China could source even more of its soybeans from Brazil, where its 2017-18 harvest took place months earlier. For the current season, Brazilian farmers produced about 113 million metric tons of soybeans with 70 million metric tons destined for the export market, according to the U.S. Department of Agriculture’s Foreign Agricultural Service. It already must dip into its stockpiles to satisfy domestic demand of 46.5 million metric tons, meaning that it has little current capacity to meet increased demand from China. U.S. producers, which are preparing to bring in their 2018 crops, are entering the time of year when the soy export pendulum generally swings their way. But the longer trend in the soybean market still favors Brazil, where more land is being devoted to crop production and improvements in infrastructure will make it easier to send those crops to market. Tariffs on U.S. soy will only accelerate that trend.

In China, domestic policy and stockpiles of the oilseed will help it weather the price increases brought on by tariffs. At an estimated 20 million metric tons, its stocks of raw soybeans are at a 10-year high. Its also has sizable reserves of soybean oil. Furthermore, policy shifts in Beijing have focused on shifting domestic production from corn to soybeans in a number of agricultural provinces. Grower subsidies for soybeans have been increased in Heilongjiang, Jilin and Liaoning provinces, helping boost domestic production. Finally, substitutes for soymeal, which is used primarily in animal feed, will help China reduce demand. China could, for example, use its ample stocks of corn to replace soy in feed. Although it would not be an ideal long-term solution because it would change the protein composition of animal feed, corn could act as a temporary substitute.

Even before its tariffs kicked in, China canceled tens of thousands of tons of U.S. soybean shipments soon after its tariff decision was announced in April, and negative net exports to China occurred through much of June and into July. U.S. farmers, meanwhile, will be hard pressed to find a substitute for the Chinese market. Soy supply chains could lengthen as the global market rebalances in response to the tariffs, with soybeans taking more circuitous routes to China’s markets. For instance, Brazil could import U.S. soybeans for its domestic market, allowing it to send more of its own crop for export.

As the part of the year when U.S. exports traditionally dominate nears, China’s tariffs are in a position to hurt U.S. soy producers centered in the greater Mississippi, Missouri and Ohio river basins. And the alternatives available to China will allow the country to limit imports from the United States. Tariffs imposed by other major export destinations, like Mexico, will further weaken U.S. soybean producers on the global market moving forward. These actions have the potential to be devastating for individual farmers. However, the consolidation of the agricultural sector and the waning power of U.S. agricultural interests in Washington may limit the political impact of those developments.

One thought on “Tariffs on U.S. Soy Will Strengthen Brazil’s Hand in the Chinese Market”