In a normal business cycle, the economy expands for a while and businesses hire lots of new people at somewhat higher wages, generating enough tax revenue to shrink the government’s budget deficit – and in rare cases produce a surplus. So, for a while, the government borrows less money.

Not this time. The current recovery is nearly ten years old and the labor market is so tight that desperate companies are trying all kinds of new tricks to attract workers – including higher wages.

Yet the US just announced its intention to borrow $1.3 trillion in this fiscal year, the most since the depths of the Great Recession.

And this isn’t a one-shot deal. Trillion-dollar deficits are now projected for as far as the eye can see: 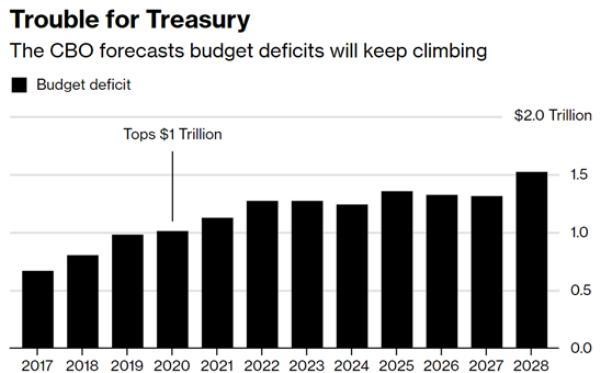 What does this mean? The US has decided that since we’ve borrowed a lot of money in the past and are still here, debt must not matter. Voters don’t care, the markets don’t care, so why not spend money we don’t have on cool stuff in the here-and-now. A new generation of super-weapons? Sure. A wall across 3,000 miles of southern border, check. Tax cuts for people who already more than they’re able to spend? Why not?

But here’s the problem – or the short-term one, anyhow: Using debt to push an expansion beyond its natural lifetime (this one is approaching the longest ever) makes the imbalances that normally end expansions much, much worse. The aforementioned labor shortage, for instance, will only become more extreme if the economy keeps growing. Interest rates, already rising, will keep going up. 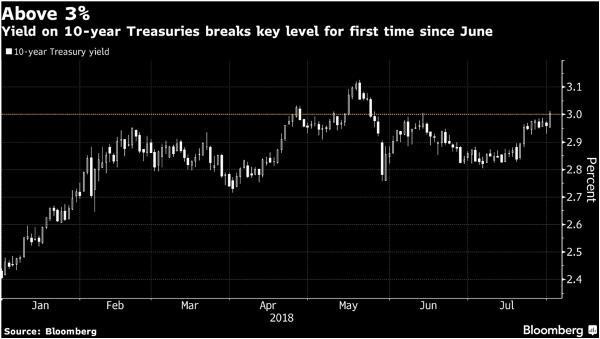 So think of the current bout of late-cycle New Age fiscal stimulus as an experiment in the style of QE and ZIRP. That is, something that hasn’t been done in the past but – given the alternatives – seems like the least risky option.

And as with QE, the US isn’t alone. Japan has given up trying to balance its budget and is now looking for new things to buy with fresh-off-the-press yen. China, faced with a manufacturing slowdown and incipient trade war, is “going for growth” via a domestic infrastructure program – after a decade of the biggest infrastructure build-out in world history.

It’s useful to note that even Keynesianism, generally the most debt-friendly (or debt-oblivious) school of economic thought, views deficit spending as a cyclical stabilizer. That is, in bad times governments should borrow and spend to keep the economy growing while in good times governments should scale back borrowing – and ideally run surpluses – to keep things from overheating.

But now we seem to have turned that logic on its head, with fiscal stimulus ramping up in the best of times, when unemployment is low, stock prices high and inflation stirring. New Age fiscal policy seems to call for continuous and growing deficits pretty much forever. 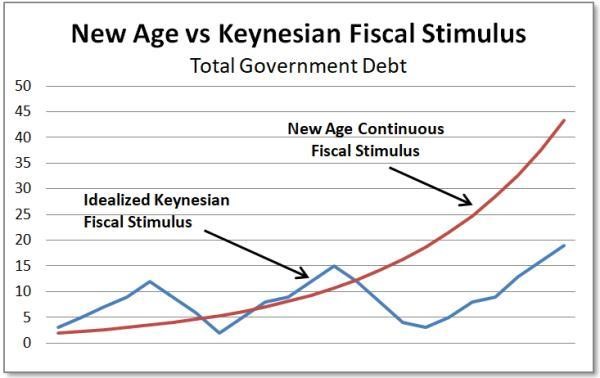 As I said, unprecedented and definitely ominous.