Skip to content
HomeFederal Deficits Are Worse Than You Think

Voters tend to be rationally ignorant. Since a single vote does not matter, for most potential voters the cost of being politically well-informed is greater than the benefit of being knowledgeable about political affairs. Therefore it’s rational for most voters to be ignorant regarding political issues.

A main reason for the high cost of being well-informed is that government officials may not want the public to be well-informed. They purposefully conceal their schemes to reduce the opposition to their policies. A well-informed body politic would be a threat to the welfare and warfare state. 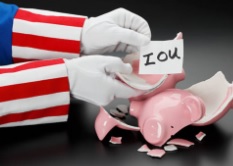 This obscurantism is on full display regarding the government budget.

Let’s start with the annual deficit. You may have noticed that the stated annual deficit is less than the increase in government debt. In order to explain this, consider a small scale example. Assume that you were $20,000 in debt at the beginning of 2017 and you earned $3,000 and spent $4,000 during the year. You borrowed $1,000 to cover this spending so your total debt increased to $21,000. A sensible reading of this situation would be that you had a $1,000 deficit in 2017 (multiply these numbers by a billion dollars to roughly approximate what is generally asserted to be the federal budget).

However, if you followed the federal government’s method, you would claim a deficit of, say, $600. According to the feds, the official deficit is less than the increase in total debt. How do they do this? Well, some of the borrowed money is simply not included in the deficit. For example, in fiscal year 2016, they claimed a deficit of $587 billion even though the total debt increased $1,422 billion and the debt held by the public (the total debt less the intragovernmental debt) increased $1,049 billion. They hide some of the deficit by simply declaring that some of the increased debt is not part of the deficit.

But this deception is of little consequence compared to the government’s claims about their spending habits.

According to the “Economic Report of the President,” government spending (outlays) over the twenty year period from Fiscal Year 1998 to FY 2017 more than doubled from $1,652.5 billion to $3,981.6 billion. In real terms, using the implicit price deflator as our measure of inflation, this was a 67% increase in spending.

Let’s take into account the economic growth during this period. Again, according to the Economic Report of the President, real GDP increased 54% in this twenty year period. So spending as a percentage of GDP only increased from 18.9% of GDP to 20.5% of GDP. It’s important to note that this does not include the substantial amount of spending at the state and local levels of government.

But the “Economic Report of the President” does not give us the full story of the government’s budget.

Return to the previous example. Assume that you were $20,000 in debt at the beginning of the year. But in addition to your $4,000 of other spending you were required to make $8,000 of payments on this debt in 2017. Your income was only $3,000. So you borrowed $9,000 to cover your deficit plus principle payments (again multiply these numbers by a billion dollars to approximate actual federal spending).

This example is roughly the situation for the federal government.

The Treasury Department with their Daily Treasury Statements (DTS) gives us an accounting of all deposits into and withdrawals from federal government accounts. The DTS shows that withdrawals more than tripled from $4,036 billion in FY 1998 to $12,995 billion in FY 2017. This is all outlays of federal spending, including government purchases, transfer payments, interest payments, principal payments on their debt, and all other withdrawals.

Adjusting for inflation, again using the implicit price deflator, this is a 124% increase in spending over twenty years. And DTS withdrawals as a percentage of GDP increased from 46% to 67% of GDP in this time period.

Let me say this again. If we define spending as total withdrawals from government accounts, then FY 2017 spending was $12,995 billion and government spending is 67% of GDP.

So, is federal spending, in 2017, 20.5% of GDP or 67% of GDP? What is the discrepancy between these estimates? The main issue here is the government’s debt service payments. Federal debt held by the public increased from $3.8 trillion at the start of FY 1998 to $14.7 trillion at the end of FY 2017. That’s 287% in twenty years. This has led to an increase in debt payments (called Public Debt Cash Redemptions) from $2.18 trillion to $8.43 trillion over this same time period. That’s right. The federal government paid $8.43 trillion in debt redemption payments in FY 2017. That’s ten times the Social Security Benefits paid out ($842 billion). Not counting these payments when reporting government spending is the chief reason that federal spending is reported to be 20.5% of GDP.

In order to cover the 2017 payments servicing the debt, federal government borrowing (called Public Debt Cash Issues), again this information comes from the DTS, was $8.89 trillion. This was the borrowing necessary to cover the $8.43 trillion in debt payments and the deficit resulting from the remaining parts of the budget.

Should this be a concern? On one hand, borrowing to pay for previous borrowing does not substantially change the government’s balance sheet. $8.4 trillion of liabilities is still $8.4 trillion of liabilities. In that sense, we should not be concerned about this matter. We should instead focus on changes in the total debt (the true deficit) and interest payments on the debt of $240 billion in FY 2017.

However we must recognize that debt payments are a form of government spending and the fact that the feds must finance this spending. Due to the principal payments on the debt, 77% of federal spending is financed by borrowing. As the overall debt rises, the risk of default grows and lenders will demand higher interest rates on government securities to account for this risk. Borrowing to make the interest payments will compound the size of the debt. This exponential growth of the debt increases the risk associated with lending to our government and intensifies the problem.

Federal government spending is much higher and their budget position is more precarious than is typically reported. Including the federal debt payments as reported by the Daily Treasury Statements provides us with a more accurate picture of the federal budget and a better understanding of a possible upcoming budget crisis.

Mark Brandly is a professor of economics at Ferris State University and an Associated Scholar of the Mises Institute.